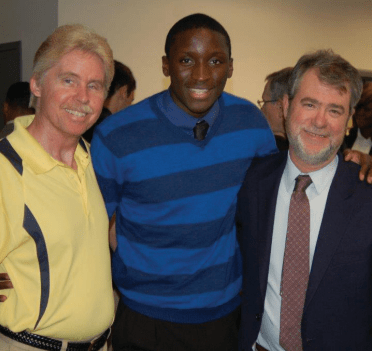 BY CHRIS MCMANES — When Victor Oladipo is among the first players chosen in the NBA Draft on June 27, don’t be surprised if a cheer or two erupts in Hyattsville. Oladipo graduated from St. Jerome and DeMatha Catholic High School before becoming a first-team All-American at Indiana University.

While the basketball star’s exploits at DeMatha and Indiana are well-chronicled, little has been written about his formative years at what is now St. Jerome Academy.

“Without St. Jerome’s, I definitely wouldn’t be here in the position I am today. That’s where it all started,” Oladipo said during a recent visit to the area.

Oladipo credits his St. Jerome varsity coach, Dick Brown, with helping him along the path to professional basketball. Brown mentored Oladipo from 2004 to 2006 before succumbing to cancer months after coaching his final game.

Oladipo will be the first St. Jerome graduate to play in the NBA.

“Dick always wanted a player of his to make it to the NBA,” said Joe Sego, Brown’s successor and a St. Jerome assistant coach in 2005-06. “So it’s kind of fortuitous that a player from his last team would be the first to make it.”

In addition to becoming one of the nation’s finest shooting guards at Indiana, Oladipo earned a bachelor’s degree in kinesiology with an emphasis on broadcast sports communication. He graduated in May after just three years.

“I actually took 19 credit hours this past semester, which is unheard of, and I still finished with a 3.1 [grade-point average],” he said. “It was tough – a lot of classes, but I grinded it out and came out on top.”

Oladipo brings the same determination to the court. He averaged 13.6 points, 6.3 rebounds and 2.2 steals last season, while shooting 59.9 percent. The National Association of Basketball Coaches named him national Co-Defensive Player of the Year. His high-flying acrobatics, exceptional quickness and 42-inch vertical leap have NBA scouts salivating.

“I saw him play for DeMatha and remember thinking he would become a very good college player because he had so much potential,” said Mike Lonergan, George Washington University’s head men’s basketball coach. “Seeing him become an All-American and NBA player has been a pleasant surprise.”

As a DeMatha senior under Coach Mike Jones in 2009-10, Oladipo averaged 11.9 points, 10.3 rebounds and 3.6 blocks. The Stags (32-4) won the Washington Catholic Athletic Conference and D.C. City Title Game, and The Washington Post named Oladipo first-team All-Met. Next season will be the 38th consecutive year that a DeMatha graduate will be playing in the NBA.

DeMatha hosted a reception May 7 to recognize Oladipo being chosen The Sporting News Player of the Year. The next night, the Archdiocese of Washington’s Catholic Youth Organization (CYO) honored him with its Outstanding Athlete Award.

“He was a tenacious defender and a great athlete,” said Sego, who nominated him for the CYO honor. “He always played defense against the other team’s best player. He was a prime player for us.”

Oladipo, a native of Upper Marlboro, played basketball at St. Jerome from the time he and his twin sister, Victoria, entered kindergarten. Brown coached his seventh- and eighth-grade teams. (Quinn Cook, Duke University’s starting point guard, was a teammate.)

“Victor was Coach Brown’s favorite player,” Sego said. “He wasn’t necessarily the best player, but Dick loved him. He played with such hustle and intensity.”

Oladipo’s final game at St. Jerome – for the 2006 CYO championship at Catholic University – ended in defeat. But the good times far outweighed the bad.

“I had a great time at St. Jerome’s – a lot of memories,” Oladipo said. “My whole life was there when I was a little boy. I still remember Sister Joyce, Miss Volpini, Sister Geri and Ms. Donoghue always telling me not to dribble the ball in the hallway. My love of the game started at St. Jerome’s.”

The title game loss was the last game Brown would ever coach; he died on July 6, 2006, after 40 years at Hyattsville’s Catholic primary school.

“He would go to chemo and still come back and want to teach us and coach us,” Oladipo said. “I could tell it was wearing and tearing on his body.”

Brown, who also taught religion and seventh-grade American history, left a lasting impression on the 6-foot-3¼, 214-pound Oladipo. He can still remember the moment he heard about Brown’s death: he was “sitting at home during the summertime and Victoria [got] a call from one of her friends” with the news. Both were stunned, and Victoria began crying.

“He fought until he couldn’t fight anymore,” Oladipo recalled. “For him to do that just made me realize that I’m going to have to fight in life no matter what the circumstances are – just keep fighting. I got a part of my work ethic from just watching him. He was never really down; he always had a smile on his face. He was always really energetic, ready to go.

“I’ll never forget that about him.”

More so than his God-given ability, Oladipo’s daily training habits have him poised to join the finest basketball players on earth.

“I’m happy to see him fulfill his dreams because he is such a nice young man and has been a first-class representative of St. Jerome, DeMatha and Indiana,” Lonergan said. “His hard work has really paid off.”