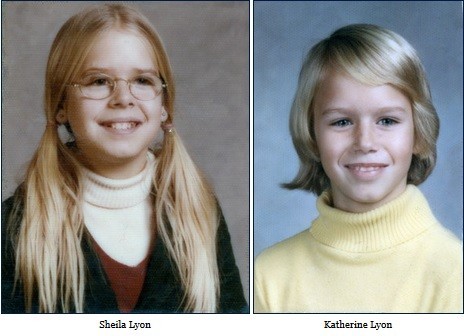 Sheila and Katherine Lyon
Beyond Hyattsville

BY CAROLINE SELLE – In the latest update on the Lyon sisters investigation, officials announced today at a joint press conference that the FBI’s evidence recovery team (ERT) is conducting a forensic dig on Taylor’s Mountain in Bedford County, Virginia.

“The team is here to process certain locations on the mountain that have become a location of interest as the result of the combined task force of the Bedford County Sheriff’s Office, the Montgomery County Maryland Police Department, the Commonwealth Attorney’s Office, and the Virginia State Police,” said Bedford County Sheriff Mike Brown.

Katherine (10) and Sheila (12) Lyon disappeared in 1975 after visiting a Wheaton Mall. In February 2014, Lloyd Lee Welch (57), a convicted sex offender and a resident of Hyattsville during the time of the girls’ disappearance, was named a person of interest in the case. On October 2, authorities named current Hyattsville resident Richard Allen Welch Sr. a person of interest in the girls’ disappearance, and a grand jury convened in Bedford on October 3.

“Our mission focus is to bring these children home if at all possible,” Bedford County Commonwealth’s Attorney Randy Krantz said.

During the briefing, officials asked multiple times that anyone with information come forward. “The willful withholding of information … is a serious matter,” said Krantz. “This is one of those situations where there shouldn’t be any fence sitting. To not make a choice is to make a choice.”

In December, Welch Sr.’s wife, Patricia Welch, was arrested and charged with perjury during grand jury proceedings. She is also a current Hyattsville resident.

Krantz confirmed during the press conference that she is accused of making “Willful material false statements while under oath.”

Brown said the ERT has 12 members up on the mountain. Additional investigators include two members of the Virginia State Police and a forensic anthropologist.

Get fit in 2016: Hyattsville edition