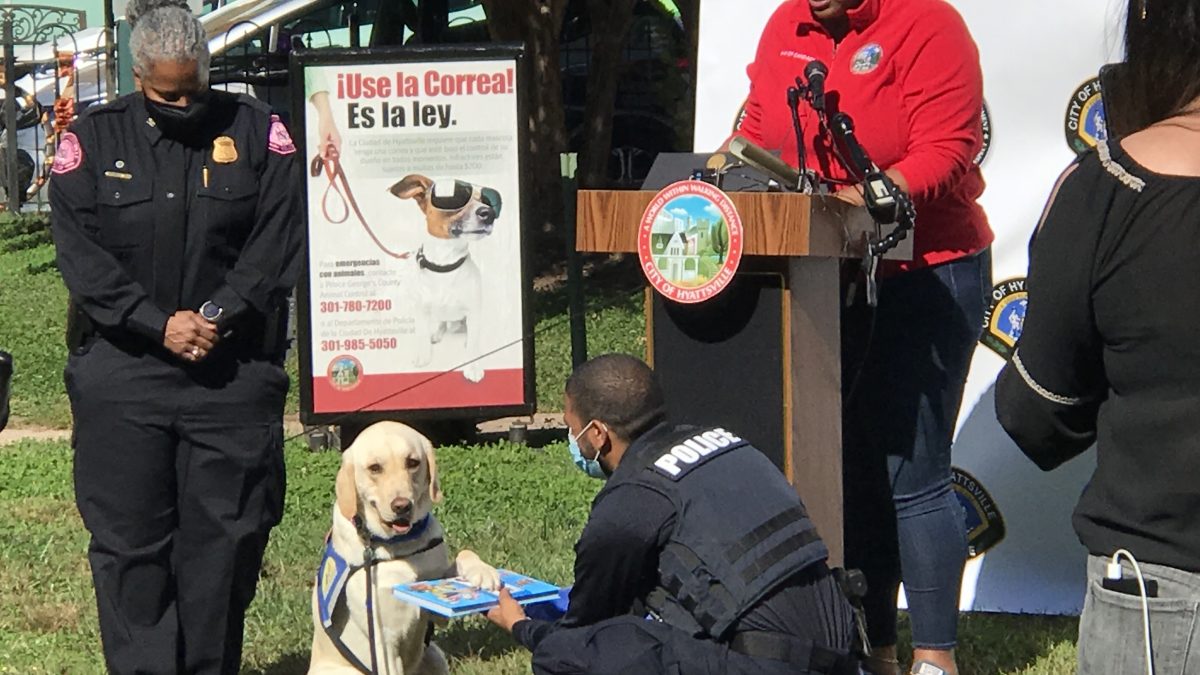 The Hyattsville City Police Department (HCPD) swore in its newest member at an Oct. 8 press conference held at Robert J. King Memorial Park. Nola the Fifth will be working with the Community Action Team (CAT), and despite the acronym, she is, in fact, a facility dog. 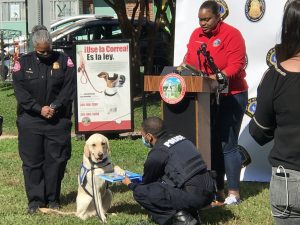 A facility dog is a service dog who serves an organization. Nola, though not a therapy dog, is trained to engage with people in crisis situations who may be traumatized or are exhibiting symptoms of a mental illness, according to an HCPD press release.

Acting Cpl. Chris Evans will serve as 2-year-old Nola’s handler. “When I brought this idea to Chief Awad, it was a vision to better the Community Action Team and the community engagement with the city of Hyattsville’s residents,” said Evans. “What better way to do that than by bringing a dog into the mix?”

Evans and Nola responded to the Oct. 1 electrical fire at the Friendship Arms senior residence home apartments. “When we went to the Friendship Arms apartments to help the residents who were evacuated because of a fire, everyone who saw Nola smiled.” said Evans in an email. “They couldn’t stop petting her. In that moment, the residents weren’t thinking about the fire, they were focused on this loving dog who was helping to bring calm to what may have been a frightening situation for some of them.”

Awad said the nonprofit Canine Companions for Independence (CCI) provided Nola to the department for free after investing more than $50,000 in Nola’s overall training and care. “We’re very honored,” said Awad. “[Nola] is already leaving her paw print throughout the city.”

Olivia Demberg, Nola’s puppy raiser since 2018 agreed that the Labrador-golden retriever mix will be a strong addition to the department. “She is the most adaptable dog I’ve ever met, so I know she’ll fit in perfectly to her new workplace and make everyone smile every day,” said Demberg.

While learning may not be an issue for Nola, Demberg said that she does get distracted by one thing: water. “The first time she saw the ocean, she ran in before I could stop her and spent so much time swimming happily back and forth,” said Demberg. “I finally had to go in the water to retrieve my retriever.”

Despite her water fascination, Nola is perfect for the department, according to Demberg, who said letting her go was a bittersweet moment. “She’s had such a deep impact on my life,” said Demberg. “⁣I can’t wait to see the difference she is going to make in Hyattsville.” 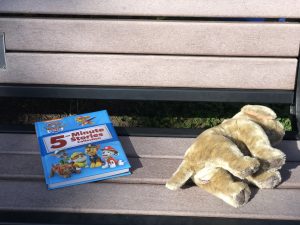 Madison Burinsky is an intern with the Hyattsville Life & Times.