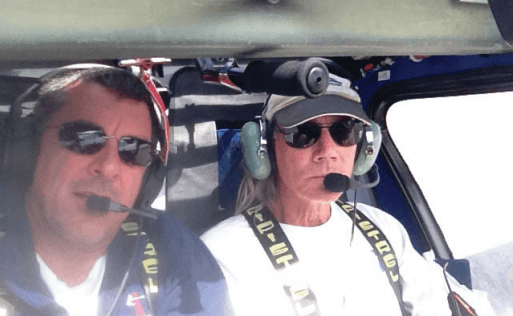 Under normal circumstances, a year-long parasailing and snorkeling adventure in the Philippines with the love of your life might be a trip of a lifetime.

For Hyattsville resident Hugh McElrath, 62, it opened the door to another trip that was equally memorable. He and his wife, Sallie, returned in January from their extended Southeast Asia jaunt,  made possible by her job transfer. By mid-March, he was back in California readying for a cross-country flight.

But this wasn’t your run-of-the-mill, United six-hour flight from LAX to Dulles. It took five days. In a 2006 touring motor glider McElrath had just purchased – and would be piloting.

McElrath’s glider, a Pipistrel Virus, is a far cry from Boeing’s mammoth Dreamliner. There was no first-class service; only room for two persons, and they used spare clothing as seat cushions. The one carry-on bag airlines allow? Fine, as long as it wasn’t heavier than 8.8 pounds. McElrath says he packed little more than a change of underwear and a toothbrush.

The engine? Let’s just say that the 20-horse field in the Kentucky Derby can produce a quarter of its horsepower.

McElrath first became acquainted with the 1,300-pound plane on the way home from the Philippines, in January. He and Sallie had decided to spend some time in San Francisco before continuing to Hyattsville, where they have lived for 27 years.

For McElrath, who has had a pilot’s license since 1979, that meant a trip to a nearby airfield in San Jose. The avid adventurer spent some time with the little glider, and by the end of the trip, he had decided to expand his flying horizons by buying it.

In mid-March, he returned to San Jose to spend nearly two weeks dealing with licensing and maintenance issues. He also looked up Greg Read, “an uber-mechanic” who had worked at the airfield where the glider was based, to see if Read would agree to make the trip with him.

At first, the recently unemployed Read had no interest in flying again. But a few beers with McElrath changed his mind. Over drinks, the pair learned they were on the same Navy submarine over 30 years ago.

And so, on March 30, the two men departed San Jose. Bolstered by a strong cold front behind them, they reached a cruising altitude of 9,500 feet.

Five days – three full, two half – and 24 flight hours later, McElrath and Read touched down at College Park Airport. Recalling the trip, McElrath says the most striking thing was “the vast emptiness of Texas.”

He had plenty of time to study it, as it took a full day of flying – nine hours – to cross the state.

“It was a whole lot of empty country, with mineral extraction the only thing going on,” he said. “We tried to stay near the interstate.”

McElrath grew up in Louisville, Kentucky, and spent plenty of time around Bowman Field, the local airport. Sallie, too, is from Louisville, but the two met in Naples, where he was stationed with the Navy.

When he went to sign up for an Italian class, his eye caught the “pretty blonde” at the register. As fate would have it, she was not only from his hometown but also knew his mother.

Their first date? A 90-minute airplane tour of Naples and the surrounding areas of Vesuvius, Amalfi and Capri.

Years later, the couple find themselves in Hyattsville with an empty nest. Their son Dewi, who was born in Italy, is in the Marines now, while son Jasper is enrolled at the University of South Carolina. McElrath, now retired, worked for the federal government for 30 years as a Naval officer, a civilian and a contractor.

It might be more accurate to call Hyattsville a home base. From Naples to the Philippians, and to their upcoming vacation in northeastern Spain, the McElraths love traveling the world gliding, snorkeling and parasailing.

When not abroad, they take advantage of the outdoor amenities that Hyattsville and the surrounding area can offer.

And, of course, there is the flying.

It is now illegal to park within three feet of a driveway apron in the City of Hyattsville; you can also add gravel to your existing gravel driveway without a permit