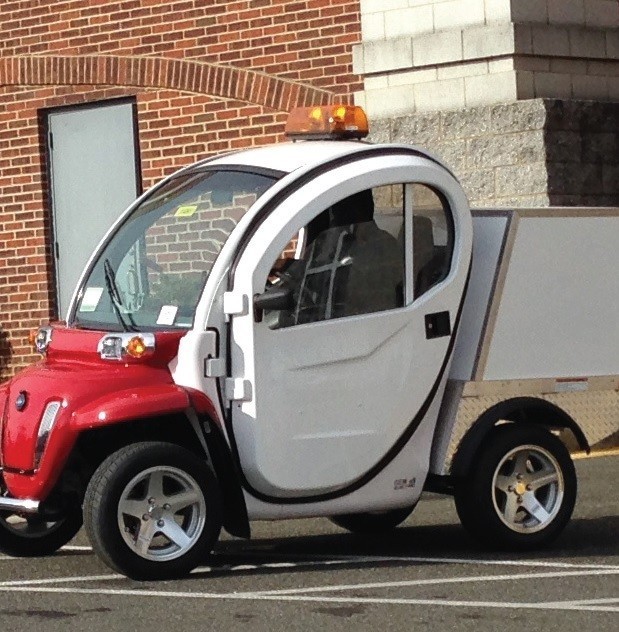 BY AMANDA EISENBERG — Three electric cars have joined the city’s fleet, funded by a $59,000  Maryland Smart Energy Communities grant. The little red-and-white Polaris GEMs, for use by Hyattsville’s parking and code officers, replace gas-guzzlers like a 2001 Ford Taurus and a Ford F150.

On November 15, after the vehicles were readied for the road in the Hyattsville Municipal Building’s parking lot, Code Compliance Inspector David Hill took one for a test drive.

“This is my first time out,” said Hill, a code compliance inspector for the city, who compared the cars to “glorified golf carts.”

“It’s kind of uncomfortable sitting in it, but I feel after about an hour or two we’ll get used to it. It’s pretty cool.”

The electric vehicles are street legal and can go up to 35 mph, said Assistant City Administrator and Director of Community and Economic Development Jim Chandler.

In October, Hyattsville was one of five cities in Prince George’s County awarded the Sustainable Maryland Certified status for its environmental policies and dedication to energy reduction. The city has made many strides in reducing its carbon footprint, such as adding bike lanes and bike signage around the city, said Councilmember Patrick Paschall of Ward 3.

The grant is administered by the Sustainable Maryland Certified, an initiative within the University of Maryland’s Environmental Finance Center. Program director Mike Hunninghake said that he and Chandler have worked together over the past five months to determine the city’s energy and fuel baseline and adopt a policy within the next three years.

Chandler said that the cars “plug into a basic outlet and charge for eight hours.”
They can be driven for up to nine hours between charges. In addition, they do not give off emissions, like gas-fueled cars do.

“We’re excited because it’s an opportunity to [use] some of the smarter technology and get away from petroleum,” said Chandler. “We’re hopeful that we can take this model and apply it to some other practices in the city.”

The electric vehicles, however, are only the latest step in the city’s sustainability action plan.

Many of the sustainable additions to the city will take “about five years to break even” despite the upfront costs, said Groves before adding that the city will save money in the long run.