Nina Faye voiced her support for the council size to stay as is, stating that her portion of Ward 3 has often felt underrepresented throughout the years. “I don’t think it would be a true representation of our democratic process to have fewer councilmembers.”

“Why are the members of the council not speaking on this?” Menasian asked.

That question was answered when all 10 present councilmembers gave their opinions on the referendum question. And they had a lot to say. Those for reducing the size of the council cited meeting length, council efficiency, the “divisions” on the council, scheduling logistics, and strain on city staff. Those against reducing the number of councilmembers argued that two members leads to better representation and more options for representation, and help with the council “learning curve.”

Councilmember Shani Warner (Ward 2) said, “To say that this is a sudden thing, I think mischaracterizes the debate that’s going on since before I ran for office,” adding that she answered a question about the issue in 2011. Warner said she’s “seen the size of the council to be a structural obstacle” to members working together on the council. “I think it’s fostered divisions and factionalism and the cliques that have been described because we don’t have to work together, with a council of this size.”

She went on to cite the length of the meetings as an issue she sees tied to the size of the council. Hyattsville has been “very lucky to have a council that works very well together” for the past few years, “but what happens when you have serious clashes of opinion and when you have controversial topics that are subjects of debate, you have 11 people up here who each want to talk about something.”

Warner also cited “problems” that have arisen when trying to work around the schedules of 11 individuals to find a time to discuss staff changes and new hires and how those scheduling issues have delayed the process. “There are certain decisions that need to happen with all 11 of us in a room … and that is virtually impossible. It’s created an enormous burden on us.”

She noted, however, that there are things that she thinks do work with the current structure: “I do like having the staggered elections, and two people for each ward.” She went on to say, though, “I think we’d be more nimble and stronger if we had fewer people.”

Calling the council size “a constant topic of conversation” on the dais, Warner stressed the “need to kickstart this conversation” with voters now, explaining the long process of enacting such a major change. She added that council does not have very many opportunities to solicit residents’ opinions. The council engages in a mandatory redistricting effort after the US Census every 10 years. The next census will occur in 2020, with the city’s redistricting likely occurring in 2021.

“I think we need to start this far in advance in order to be well-positioned for the next redistricting … It’s such a big, enormous change to think about, that you don’t want to wait until the last minute,” Warner said.

“This thing on the ballot is not binding; it’s not the end of the story,” she said.

Councilmember Tom Wright (Ward 3) was the next to weigh in. Citing Warner’s claims of inefficiency, he said, “Efficiency alone, in my opinion, should not come at the expense of representation. We can be inefficient up here with, say, four of us, or we can be very efficient with perhaps 14 of us.”

Councilmember Paula Perry (Ward 4), who has been on the council for 18 years, said the issue has come up before but never made it to a referendum because “the majority [of residents who spoke on the issue] opposed it,” adding that “having two councilmembers has been an advantage.” She cited the benefit of having options: “If you don’t like one councilmember, you always have the other to go to. … If one didn’t do anything, you always had at least one other person to lean on.”

“As far as discussions go, yeah, there are times we don’t get along,” said Perry. “But a discussion is democracy; having less of a discussion is, I think, a hinderance.”

Perry also talked about having less representation for residents in West Hyattsville if council size was reduced to one councilmember per ward. “As it is now, [some West Hyattsville residents] feel very separated from the city,” she said.

Councilmember Robert Croslin (Ward 2) said he agreed with Councilmembers Wright and Perry. “I think that it is important to keep the number the way it is. I think if we go to one councilmember per ward, we lose something.” He talked about the learning curve that every “newbie” councilmember has after being elected. “If you have someone already there in your ward who has been here awhile, you have an opportunity to get help with that learning curve. I don’t want to see that advantage leave our council.”

Croslin pushed the need for respectful disagreements on the council. “Everyone is, at some point, going to disagree with someone else. However, I think we can disagree with respect for each other.”

Councilmember Ruth Ann Frazier (Ward 5), who is often quiet at council meetings, spoke on the issue of speaking time, saying, “The mayor has the authority to set a time on the councilmembers. If it’s getting out of hand, then it’s the mayor’s responsibility to say okay, let’s move on.” Her opinion? “Leave the council as it is. Each ward needs it own representation. Let’s leave that as it is and concentrate on rules and regulations.”

Attempting to explain the referendum questions, Councilmember Patrick Paschall (Ward 3) said, “First, I think it’s important for us to note what we are and aren’t debating here. The debate isn’t whether or not to reduce the council. The debate is whether or not the council should spend resources and likely funds associated with expert opinions in investigating what the different structures may look like and investigating how those structures may play out for our city. And having the more information to really be able to make an informed decision on what the structure should look like, if any change is appropriate.”

Paschall added that he didn’t want to spend time and money looking into this issue without knowing what the voters want. “That’s what this question is: Do you, the voters, want to see the council engage in that process? And if so, getting a spot-check on what your initial preferences are in terms of possibilities.

“It’s not us making a decision on the direction we are going and shoving this down people’s throats,” Paschall said. “No decision has been made.”

He went on to give his opinion on the issue, saying, “I have to question the base validity of more is better; more councilmembers equals better representation. I don’t know that that’s true.”

Paschall enumerated the reasons that he is for reducing the size of council, with one being that “it is also difficult to have meaningful relationships and discussions with other legislators when there are so many of us.”

“I do support reducing the council size. I don’t support doing it hastily, and that’s why we need to hear from the voters,” Paschall said.

Saying he would try to be brief, Councilmember Edouard Haba (Ward 4) weighed in with his opinion, saying “the conversation needs to happen.” He brought up the wording of the question, saying “it is leaning” that the question only asks about reducing the size of the council or keeping it the way it is. He said the question should have been left open, to let residents decide on whether to keep the number of councilmembers as is, reduce the number or increase the number.

Haba said he supports keeping the size of the council as is, because “this is a part-time job,” adding that having two councilmembers ensures representation. “I see a lot of advantages to what we have currently,” he said.

Touching on the final question of the referendum, Councilmember Jospeh Solomon (Ward 5) cited data that at-large members are received favorably in cities that use them and are seen as being impartial. “I think that where we are in terms of growth and how we are experiencing that across all wards in the city of Hyattsville, that it is at least worth considering whether it’s better for us to bring on some level of at-large councilmember.”

Former councilmember Scott Wilson, who served for 16 years, said he’s always been against decreasing the number of councilmembers. “The more representation we have, the better the chances we have for avoiding unintended consequences in our votes,” he said.

Councilmember Bart Lawrence (Ward 1) chimed in about the at-large member, saying he shares concerns about parts of the city that may be underrepresented by an at-large member.

The mayor, who proposed the referendum on this year’s ballot, spoke last.

“The question of the size of the council, for me, has very little to do with relationships and how well people get along with each other,” Mayor Candace Hollingsworth said. “It’s more about how best can we get work done.” She pointed to the number of full-time city employees (seven) compared to the number of councilmembers (11). “That means that when you have 11 very active councilmembers and mayor, those seven people are fielding requests for information, constituent issues from 11 different people.”

“The question is leaning, yes, toward reduce … because I do believe that is what is necessary,” she said. “Yet if that is not what the residents desire … we don’t spend any additional city resources to explore that question any further. My opinion is that it should be reduced. I would hope that the residents think about those particular operational impacts of the size of this council and what it bears on this group.”

Citing requests from residents to hear each councilmember’s perspective on the issue,  Hollingsworth said she did not enforce the two minutes during the hearing so that councilmembers could have their time to give their opinions.

Need more information? The discussions are continuing on social media and the H.O.P.E. listserv.

Here are the referendum questions as they appear on the ballot: 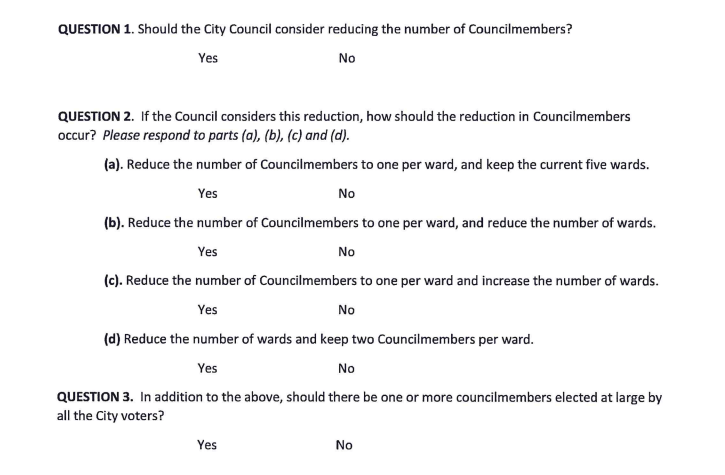