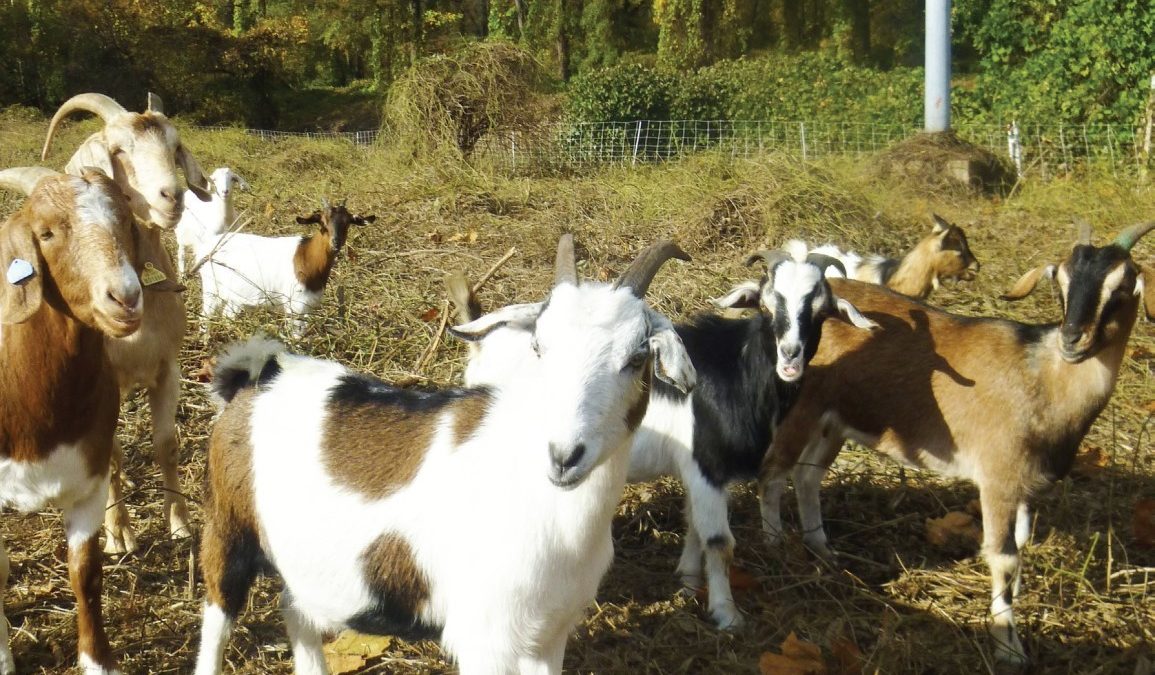 BY ROSANNA LANDIS WEAVER — By Nov. 8, the day Brian Knox came to pick up his herd of approximately 30 goats, the plot of land off Nicholson street could have been used to illustrate the word “denuded” in the dictionary. True to their billing, the goats had cleared all the invasive species, earning their title as “environmentally friendly vegetation control.”

The goats, hired by the Anacostia Watershed Society,  had arrived Nov. 1 to clear a total of 1.5 acres of kudzu and other invasive weeds off an area by the Northwest Branch of the Anacostia river, not far from Ager Road.

As is true at every job managed by Knox, supervising forester for Eco Goats, a security guard was hired to keep watch over the flock by night.  Knox says when calling security firms to get quotes the job he often has a hard time explaining what will be involved.   While the use of goats to address vegetation has become more common, it continues to be rare in an urban environment.

The security guard at the Nicholson job earned his pay when a driver under the influence “of something” spun off the road at 3 a.m. Sunday morning, Nov. 3, taking down a portion of the electrified fence that keeps the goats inside the area and the people out.  By the time Knox arrived, the vehicle was being towed, and the fence was quickly repaired.  No goats were injured.

A few hours later, he was called again by a resident who reported that one of the goats had just given birth to twins.  Knox immediately came to pick up the kids, now named Ashton and Mary, and their mother Princess and take them back to Garden Farms of Davidsonville, Md.  In all likelihood the kids would have been fine where they were, but Knox notes newborn kids move quickly from toddling to scampering, and at even a few days old are more difficult to corral into the truck.

This is not the case for the other approximately 30 members of the herd, who were ready to go home and knew the routine.  While the tallest goat, Larry, stood on his hind legs, munching on the last green vine in sight, some 8 feet up in a tree, others had a forlorn and hungry look.   Some appeared to gaze longingly at the stunning amount of green kudzu vine just a few feet on the other side of the fence. Others looked idly at the empty bottles of Bacardi and Corona on the ground: not evidence of a goat party but of the kind of pollution under the greenery that the Watershed society now has a better chance of keeping out of the river.

When Knox opened the truck, which had feed inside, the goats practically trampled each other in their eagerness to get on board.  The goats will be back in the spring to clear two additional acres on the other side of the creek. The herd may be larger: according to neighborhood observers in addition to the kids who were born it appears that others may have been conceived in Hyattsville.