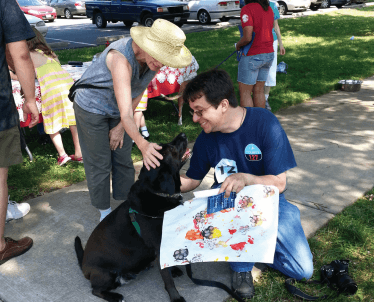 Michael Horlick praises his paw-painting dog Bamboo, who seems to have found a new admirer.
Art

Over 50 people turned up on a hot, sunny Saturday morning in Magruder Park to watch 16 local artists at work. But the spectators weren’t likely to get tips on technique; these artists were canines competing in the 17th Annual Dogs for the Arts.

The June 1 event, put on by the Lively Arts in Hyattsville program, gave neighborhood dogs a chance to showcase their artistic paw-painting talents and also compete for prizes. Activities included a talent competition as well as contests for Dog and Owner Look-Alikes, Best Companion and Best Overall, with the winners getting PetSmart gift cards.

The Lively Arts is run by longtime resident Gloria Felix Thompson, who is also the president of the Hyattsville Preservation Society.

Cheri Everhart, the city’s recreation events coordinator, was on hand to help set up and break down the event. “It’s a great opportunity for residents to bring their dogs out and socialize,” she said.

The dogs, too, enjoyed the opportunity to socialize. Alicia McNeill, a Hyattsville resident, said that it was her dog Lila’s first social outing. And it was a memorable one for both of them – Lila went home with the Best Overall in Hyattsville award, which earned her a “spa treatment” grooming donated by Chichie’s Pet Boutique in addition to the gift card.

“Lila is a great dog – very social and [she has] a lot of energy,” praised Welch, who kept a large water bowl filled throughout the event to keep the dogs hydrated on the hot day.

New city councilmembers are often asked to judge the various competitions. “It’s a good opportunity to introduce [them] to the community in a lovable way,” commented Thompson.

Miss Floribunda: In search of blue flowers for landscaping

Busboys Books under new management, with ‘thoughtfully curated’ books for the community

Mall at Prince Georges hosted back to school pep rally

Hyattsville Life and Times, 6 years ago 1 min read
From the Editor