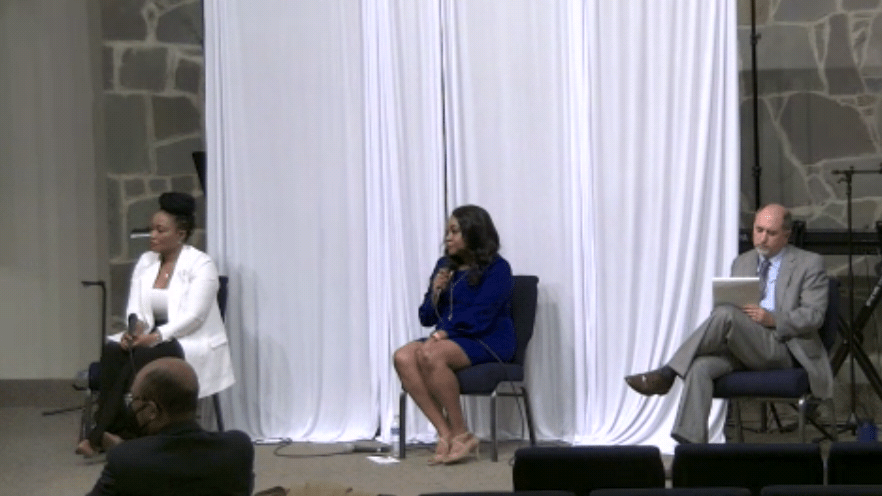 There are three candidates running for the single District 3 seat: Sia Finoh, Eric Olson, and Eve Shuman. All three attended the forum.

Eve Shuman, who was first to speak, introduced herself as a mom, an attorney, and a former US senate staffer. Shuman, who grew up in a household near JFK airport where her family helped recent immigrants get on their feet, said she is running because she cares about people. Asked to describe her campaign in one word, she offered “unstoppable.” Shuman spoke about the need to ensure retired Prince Georgians can afford their property taxes and medicines, as well as the need to address crime and prevent children from getting involved in illegal activity by means of summer youth employment and recreational sports. Shuman also supports a citizens’ advisory board for transparency in development, and expanding the commercial tax base by bringing in more businesses.

Sia Finoh, a single mother of three, said she came to Prince George’s county from Sierra Leone as a refugee at age 13. “This is my home,” she said, “And when something is broken in your home, you get up, roll your sleeves, and fix it.” Finoh said that the county deserves a change, and doesn’t have the integrity and accountability to move into the 21st century. Finoh said her campaign was “unbreakable.” She specified education, including trade schools, and promoting businesses, especially small businesses, as legislative priorities. Finoh set herself a goal, if elected, of adding 2,000 businesses in the county.

Eric Olson, a father of two, said he views himself as a community organizer, not just a legislator. He detailed his long political history, including nine years on the College Park city council (1997-2006) and eight years in the district 3 seat (2006-2014). Olson offered “together” as the single word for his campaign. Olson said he intends to focus on quality of life issues, citing his work on limiting pawnshops and illegal strip clubs, as well as preventing overcrowded rental houses. He also spoke about the need for affordable housing and improved infrastructure.

On many issues, the candidates were aligned. All three opposed the maglev train, for example, citing the high environmental cost and the potential to divide and thereby destroy communities. All candidates also spoke in favor of increased requirements for affordable housing, as well as firmly condemning the county council’s proposed redistricting map, which was passed despite unanimous citizen opposition. (The map was later overturned in court.) All three also acknowledged the need to protect the environment.

On public safety, Shuman and Finoh spoke in support of community policing. Shuman emphasized the recent increase in crime combined with a decrease in the number of police officers, and stressed the need to recruit officers from the communities they would be policing. Olson cited the Youth and Gang Violence Prevention Task Force, which he co-proposed in 2008, as an example of effective crime prevention that addressed the issues that lead to crime.

Michael Herman posed one of the key questions for the debate, asking the candidates to discuss the choice between candidates with prior experience, such as Olson, or candidates with “fresh and new ideas,” such as Finoh and Shuman.

“We need to be in the 21st century,” Finoh responded, adding that it is time to move on from politicians talking about what they did eight years ago. “We want to change the narrative of Prince George’s County,” she said. Olson responded that what matters is not length of time in office, but a person’s accomplishments while in office. “We should be looking at results,” he said. “I reject the word experience,” Shuman said, adding that she wouldn’t be surprised if every woman, person of color or member of a disadvantaged group cringed upon hearing appeals to experience. “That’s a wonderful way to keep new people out.” Instead, Shuman suggested, we should ask if a person is qualified. “And I would say, yes, I am very qualified!”

The state primary is July 19, with early voting from July 7 to July 14. The general election is Nov. 8, also preceded by early voting, from Oct. 27 to Nov. 3. Any voter can also request a mail-in ballot for either election.