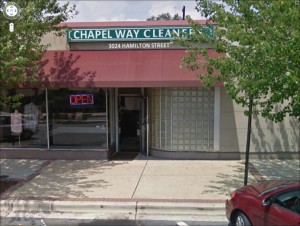 BY SUSIE CURRIE — Normally at this time of year, organizers would be putting the finishing touches on plans for the annual International Festival, held every September at Queens Chapel Town Center.
This year, though, the city’s 125th anniversary celebration is scheduled for that weekend instead of the festival. Acting recreation director Abby Sandel said she expects it to return same time, next year.
In April, Chapel Way Cleaners opened in the location that Hamilton Cleaners closed in August 2010.  Manager Emmanuel Sogah says that although the ownership has changed, the store retains “the same 15-year experienced staff.”
Over the summer, the shopping center at the intersection of Hamilton Street and Queens Chapel Road lost Curves, which consolidated with the Takoma Park location. And Yawd Style Caribbean Cuisine gave way to Mi Patio, serving Dominican cuisine.
One thing that hasn’t changed is the Tuesday farmer’s market. Held in the shopping center parking lot, continues to draw a regular crowd, and probably will until the end of the growing season.

Postcards from the Past: Husbands brought home the bacon -- and other groceries

Hyattsville resident sends her son off to play for the NFL