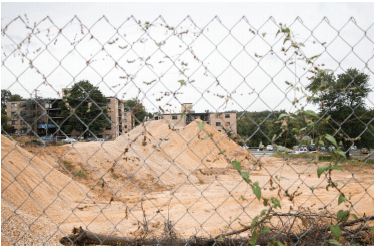 Werrlein expects to get building and grading permits in January for this site. Credit Julia Nikhinson
Hyattsville

Development by park renamed, too: Who is Jonathan Werrlein, anyway?

During the past year, a real estate developer changed the name of a planned development next to Hyattsville’s biggest city park.

Werrlein Properties originally named the site Magruder Pointe, after the neighboring Magruder Park, which was donated to the city in 1927 on the condition that only white people would be able to use it. Click here (Link to Magruder

Now, the development will be known as Suffrage Point, in recognition of the site’s history as a gathering point for the suffragettes as they prepared to march to Washington, D.C., fighting for equal voting rights for women.

“It is very timely and symbolic,” said Werrlein. “We are living in a crazy world, and we wanted to show our support for our country’s rich history and our commitment to diversity and equality.”

Jonathan Werrlein, owner and managing partner of Werrlein Properties, said that while he was renovating a home in the community, the new owners and their neighbors asked him to consider taking on the abandoned Washington Suburban Sanitation Commission (WSSC) building, as well.

Werrlein was up for the challenge. “I really do think it’s going to be something spectacular when it’s all done,” he said.

Werrlein said he expects to get the building and grading permit this month for the upper lot of the site.

Werrlein’s career began in manufacturing. His stepfather had a business that manufactured Teflon hoses, and after college, Werrlein helped his stepfather’s nephew start a distributorship in Raleigh, N.C.

In 2003, Werrlein, his sister and his twin brother moved to Maryland and started a new company in Bowie. He was again manufacturing Teflon hoses, which they did until their business was acquired in 2008.

Werrlein had a 5-year working contract with the acquiring company. When that contract ended, in 2013, he jumped into the construction business and eventually founded Werrlein Properties in 2014.

Werrlein said he is passionate about building and renovating homes.

“I consider myself a person of integrity,” Werrlein said. “I really take pride in doing what I feel is the right thing to do, with the hope that those decisions bring happiness to as many people as possible.”

Hyattsville came on his radar after he bought and renovated seven houses in Riverdale Park. Werrlein Properties then began to renovate houses in Hyattsville.

Werrlein said he’s renovated around 20 houses in the area.

“We build a lot of new houses,” Werrlein said. “I prefer doing the major renovations, and typically that’s for an older house.”

Hyattsville offers many outdoor amenities, Werrlein noted, which is something that people are looking for as they buy houses during the pandemic. More people want home offices, as well.

Werrlein hired Michael Romero, a local architect, to design the Suffrage Point houses to fit the character of the community.

Romero had attended a meeting about three years ago at Vigilante Coffee Company, he said, where residents gathered to meet Werrlein and discuss their concerns about the project. Romero said he, like some of his other neighbors, did not like the architecture in the original plans. After following up with Werrlein and showing him some design ideas in a neighboring community, Romero got the job.

He commended Werrlein on his perseverance, despite challenges, when other developers might have walked away.

“He’s still trying to do the right thing, in the face of continued opposition,” Romero said. (Click for more on Werrlein) “He really believes in the project.”

Werrlein has been living in Annapolis since 2008. And while he does not currently plan on moving to Hyattsville, he said his family have talked about doing so after his two children are out of school.

“Hyattsville is such a unique, interesting and diverse city,” said Werrlein.

Maryland men’s lacrosse looks ahead to another great season

PorchFest is back, bringing local musicians together to jam