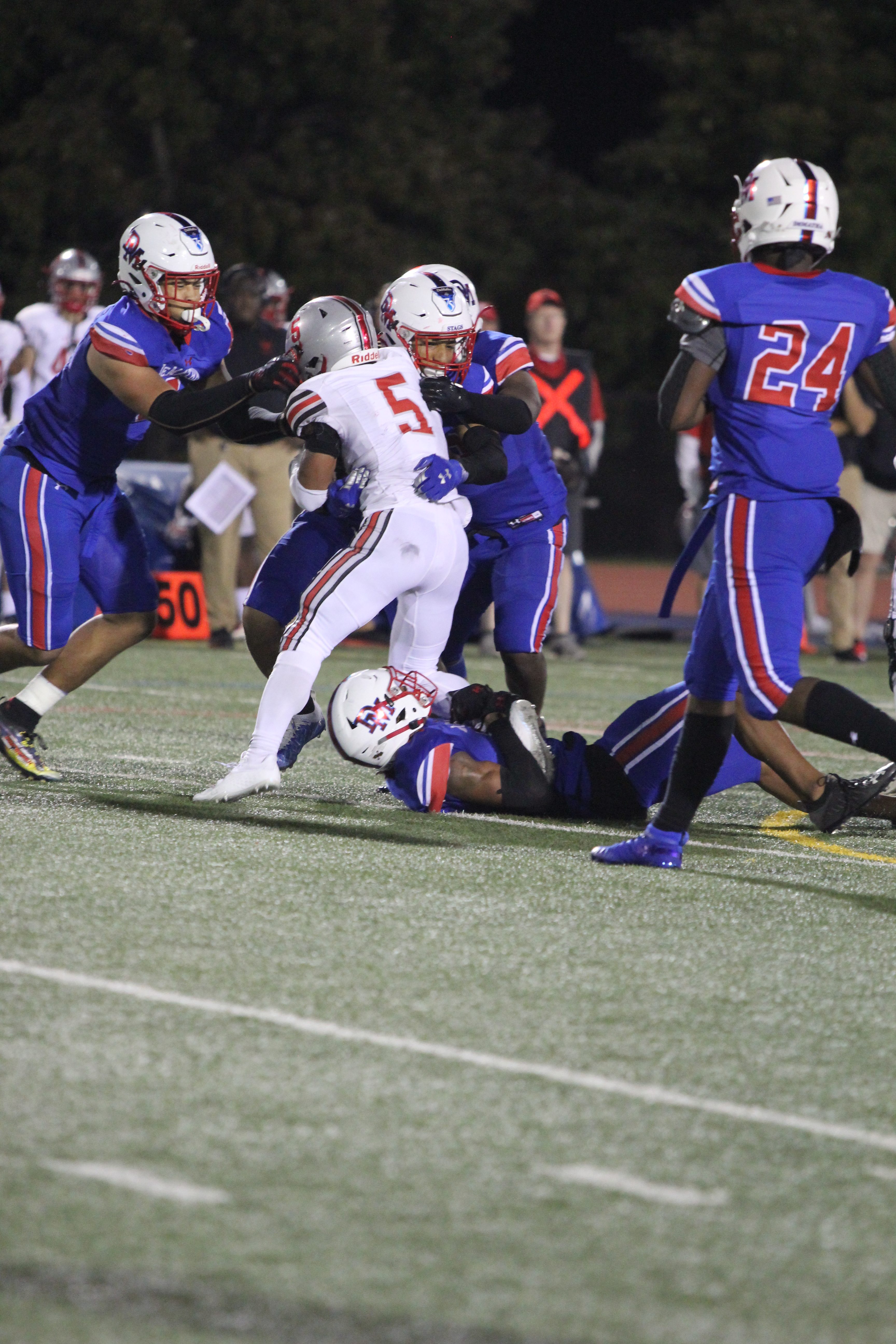 The DeMatha defense held St. John's to its lowest point total of the season. Here they are swarming Cadet running back Jamar Curtis. Photo courtesy of Ed King.
Hyattsville

The Cadets, top-ranked in the Washington area, held the No. 4 Stags to their lowest point total of the year en route to a 14-7 victory.

“Offensively, we could not control the line of scrimmage,” DeMatha Coach Bill McGregor said. “They overpowered us, and we didn’t play well throwing the football. We didn’t have time to throw, and some good decisions were not made. But [the season] still has a long way to go.”

Stags freshman quarterback Denzel Gardner, under pressure most of the night, often had to hurry his throws while trying to escape the St. John’s pass rush. He finished 7 of 21 for 71 yards, one touchdown and one interception. He was sacked six times.

“Our protection was breaking down,” McGregor said. “They overpowered us at the point of attack. They’re a big, strong football team, and they’re a very good football team. We’ve got a lot of work to do.”

The Cadets improved to 7-0 and 2-0 in the Washington Catholic Athletic Conference. They have won four games by shutout and given up just 20 points all season. Their 14 points Friday were their least this year.

“I thought our defense played well,” McGregor said. “We limited them to one touchdown in each half. That’s a high-scoring team and a very athletic team. Defensively, I don’t think we could have played much tougher than we did.”

Neither of the two longtime rivals scored in the first quarter in what was the Stags’ most well-attended home game of 2021. The teams combined to punt the first 11 times they had the ball.

DeMatha got on the board first when Gardner stepped up in the pocket and found K.J. Winston open over the middle for a 39-yard TD. The score, with 2:58 to go before halftime, completed a five-play, 94-yard drive. It included a completion of 14 yards to Winston and a 22-yard run by Brendon Wyatt.

St. John’s tied it on their next series by going 65 yards and scoring on a 20-yard run by Jamar Curtis.

The Stags got a 24-yard return by Winston on the second-half kickoff, and, helped by a roughing the passer penalty, marched into Cadet territory. The drive ended at the 25 when Phillip Rawlings picked off Gardner.

St. John’s converted the turnover into points on D.J. Linkins’ 47-yard reception from Wyatt Hagen. Linkins caught the ball near the left sideline and outran pursuers across the field and down the opposite boundary into the end zone.

Following a sack by DeMatha sophomore Emmett Laws and a 22-yard punt, the Stags took over with their best field position of the evening – the Cadet 32. They managed just four yards before Gardner’s pass was knocked down at the line of scrimmage. Daniel Holbrook missed wide right on a 45-yard field goal attempt.

DeMatha proceeded to the St. John’s 23 midway through the fourth quarter, but Gardner threw incomplete on fourth down.

McGregor said he was most disappointed with his team’s “lack of offensive production. … Somehow we’ve got to figure out what we’re doing offensively and get it going.”

Rankings & Upcoming Games – DeMatha is ranked sixth in The Washington Post Top 20. The Stags will host a non-league game against Roman Catholic (3-6) of Philadelphia on Friday Oct. 29 at 7 p.m.  (UPDATE – The game has been canceled.)

“It’s going to come down to a two-game season at the end,” McGregor said. “Right now, we’ve got to go back to the drawing board. We’ve got a lot to do.”

Guilford Woods Gets a Temporary Reprieve