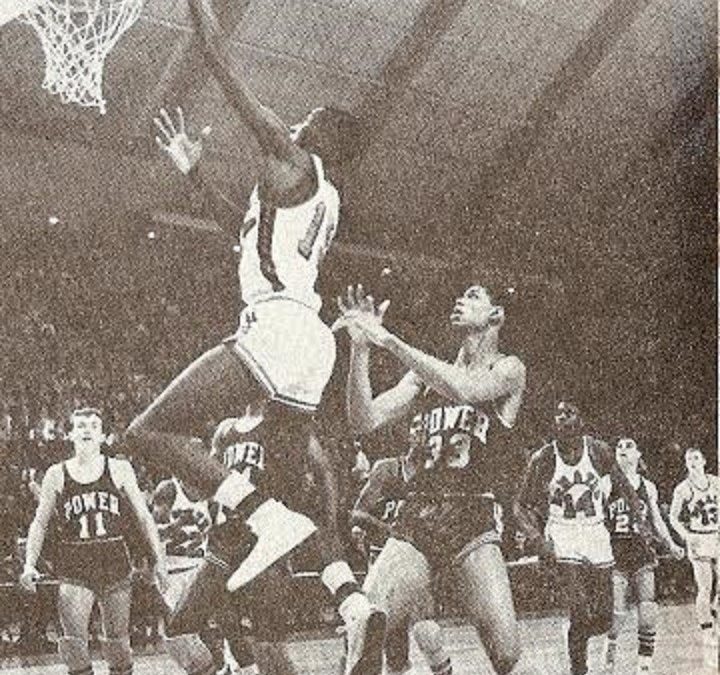 BY CHRIS MCMANES — Morgan Wootten won 88 percent of the basketball games he coached at DeMatha Catholic High School from 1956 to 2002. He learned more from the losses than the wins.

On Feb. 1, 1964, DeMatha fell to Power Memorial Academy, 65-62, at the University of Maryland’s Cole Field House. The Panthers featured Lew Alcindor, a 7-foot-1 junior center who changed his name to Kareem Abdul-Jabbar and became the all-time leading scorer in NBA history.

Wootten reasoned that by shutting down everyone else, one player couldn’t beat him. He was wrong. Jabbar dominated with 37 points and 21 rebounds.

When the two teams met again at Cole Field House on Jan. 30, 1965, the then-33-year-old coach whose wife Kathy was expecting their first child any day, decided to go after Jabbar, deny him the ball and not concede anything.

To help prepare for Jabbar’s size, one of Wootten’s assistants, John Moylan, suggested that the Stags practice with Sid Catlett, a 6-8 power forward, holding a tennis racket over his head.

“We wanted to emulate [Jabbar’s] wingspan,” said Moylan, who served as DeMatha principal from 1968 to 2000. “The idea was to get the players to shoot their regular, normal shot but know where to shoot from and not get blocked.

“That was the purpose of the tennis racket.”

The Hyattsville school celebrated a 50th anniversary reunion of the contest on Jan. 30, 2015 with a reception, video and player introductions during the Stags’ home game against Bishop Ireton.

Power entered the 1965 rematch on a 71-game winning streak, while the Stags had won 29 straight. DeMatha, founded by the Trinitarians in 1946, was No. 1 in the Washington area; the Panthers were arguably the best team in America.

“The first game sold out that night, but the second one sold out three weeks in advance,” Wootten said. “Whoever heard of a high school game selling out a college arena of over 12,000 three weeks before they played?”

Power’s players and coaches enjoyed lunch in the Stags’ cafeteria the day before the big Saturday night game in College Park. Pregame festivities included a boys matchup between St. Bernard and St. Jerome.

Wiles, who went on to play at Georgia and Maryland, said the Stags felt little pressure to win.

“We were expected to win every game, except for the Power game because they were a tremendous team,” said Wiles, who lives in La Quinta, Calif. “If we lost to St. John’s or McKinley Tech, that was a disaster. If we lost to Power Memorial, it was a good contest, so there wasn’t as much pressure.”

After their customary prayers, including a petition to St. John DeMatha, the Stags took the court and went into halftime with a 23-22 lead. Wootten’s strategy of having Whitmore in front of Jabbar and either Catlett or Williams behind him paid off. Jabbar, who averaged 33 points per game that season, ended with 16 points, the fewest of his high school career.

“We took the ball away from him pretty much the whole game; I think he caught it 11 times,” Wootten said. “Mickey Wiles and Ernie Austin did a great job of directing [Power’s offense] down the sidelines. We were trapping, and the name of the game was keeping it away from Kareem.

“That’s what stands out in my mind: the great defense we were able to play.”

Catlett, who finished with 13 points and later teamed with Whitmore at Notre Dame, said he didn’t anticipate scoring so much.

“I was just in the right place at the right time,” he said on reunion night. “The ball just happened to show up in my hands, and I was able to do something with it.”

With a minute and 40 seconds to play, Catlett nailed a long jumper and hit a foul shot as DeMatha surged ahead 41-36. Wiles hit two free throws and Catlett scored on a rebound basket to extend the lead to 45-38. Catlett produced seven of the Stags’ final nine points in their 46-43 victory.

“The game is a centerpiece of Morgan’s career,” said Tom Ponton, DeMatha’s development director. “People in the area who didn’t know about DeMatha before the game sure did after.”

The Stags finished 24-1 that season, losing only to the Maryland freshman team. The Panthers went undefeated the rest of the way and captured their third straight New York City Catholic championship.

“When I look in the stands and I see the diversity, and I see the growth of DeMatha, that game was tremendous,” Catlett said. “It was the foundation for an institution we all want, which is the type of educational institution where, in spite of religious and racial differences, it can grow into something beautiful that we can all be proud of.”

Chris McManes (mick-manyz) is a member of the DeMatha Alumni Association.