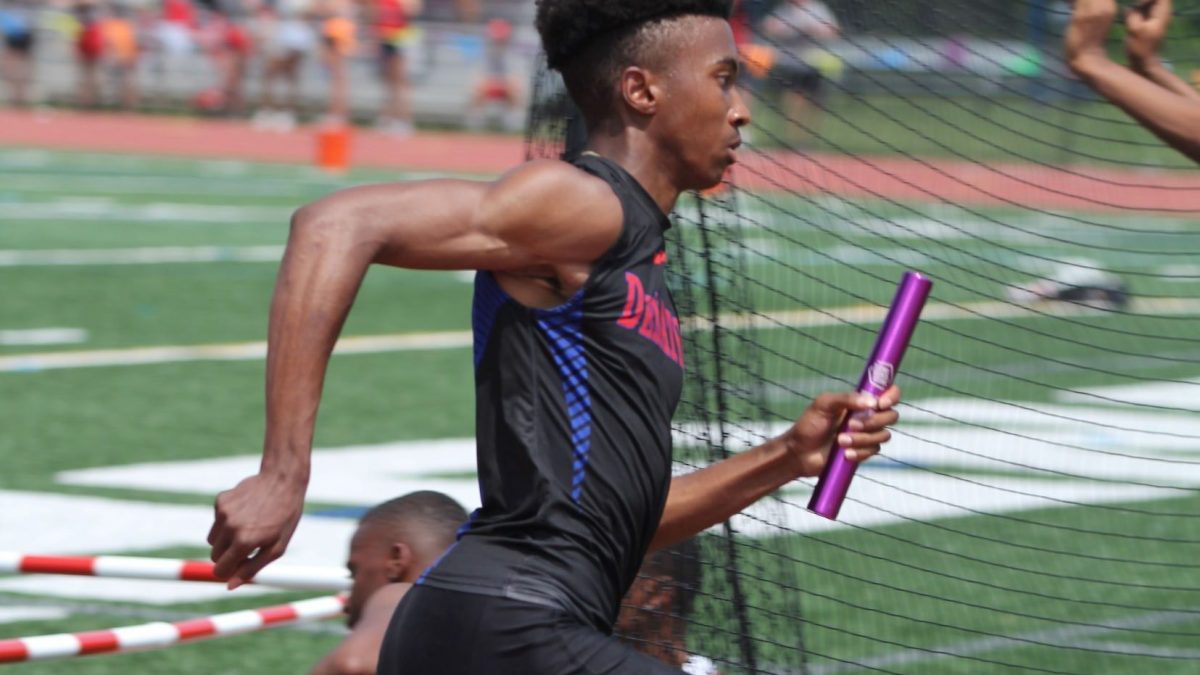 Sage Phillips helped DeMatha set a meet record in the 4x400-meter relay at the 2022 WCAC outdoor track championships. The senior also won a pair of individual events and will run track next year at Penn State. Courtesy of Ed King.
DeMatha

DeMatha scored highly in several individual events at the 2022 Washington Catholic Athletic Conference Outdoor Track and Field Championships May 20-21. It was in the team events, however, where the Stags really dominated.

The triumph was DeMatha’s seventh title since 2010. (The WCAC-concluding meet was not held in 2020 and ’21.) The program, which won its first league crown in 1991, now has 18 conference championships.

“It felt like a burden off my shoulders,” Stags sixth-year Coach Buddy Crutchfield said. “When you win [often], people expect you to win. So, this means a lot to me.”

DeMatha’s Gavin Weddington, Christopher Toomer, Dawson Grogan and Daden Grogan established a meet record in the 4×800-meter relay with a time of 7:52.03.

The Stags also set a meet standard in the 4×400 when Dawson Baker, Zilan Williams, Sage Phillips and Weddington combined to run 3:15.95. In addition, the four were recently recognized as honor roll students.

Grogan’s performance was significant considering he missed more than two months of the spring season with a hamstring injury.

“He didn’t start running with us until the end of April, and then we brought him back slowly,” Crutchfield said. “It was a really tough task for him to do what he did.”

Grogan will compete next year at North Carolina A&T. “They have a great program,” Crutchfield said. “He’s a strong kid. He’ll help them out a lot.”

“Sage had a wonderful meet,” Crutchfield said. “I ask a lot of Sage, and he’s come through for me every time. When Dawson went down with a hamstring and couldn’t run in the indoor nationals, Sage really picked us up.

“He and Dawson were the heartbeat of the team.”

James Long was third for DeMatha in the 400 and Williams fourth. Anthony Waterman placed second in the 300 hurdles.

Williams was runner-up in the 100 and 200 behind Nyckoles Harbor of Carroll. Williams is heading to Rutgers on a football scholarship.

In field events, Kristian Tate was second in the high jump. McGinnis placed third in the long jump and Michael Hansford second in the triple jump.

Maximus Greene was 13th in the discus, while Adrian Walker was ninth in the shot put.

Several of Crutchfield’s top performers will compete in Philadelphia June 16-19 at the New Balance National Outdoors.

Crutchfield, whose first spring team at DeMatha (2017) placed second in the WCAC, gives much of the credit for his program’s success to his assistants.

“Every time we win, it means a lot because my coaches have done a hell of a job,” he said. “I could not ask for better coaches than I have now.