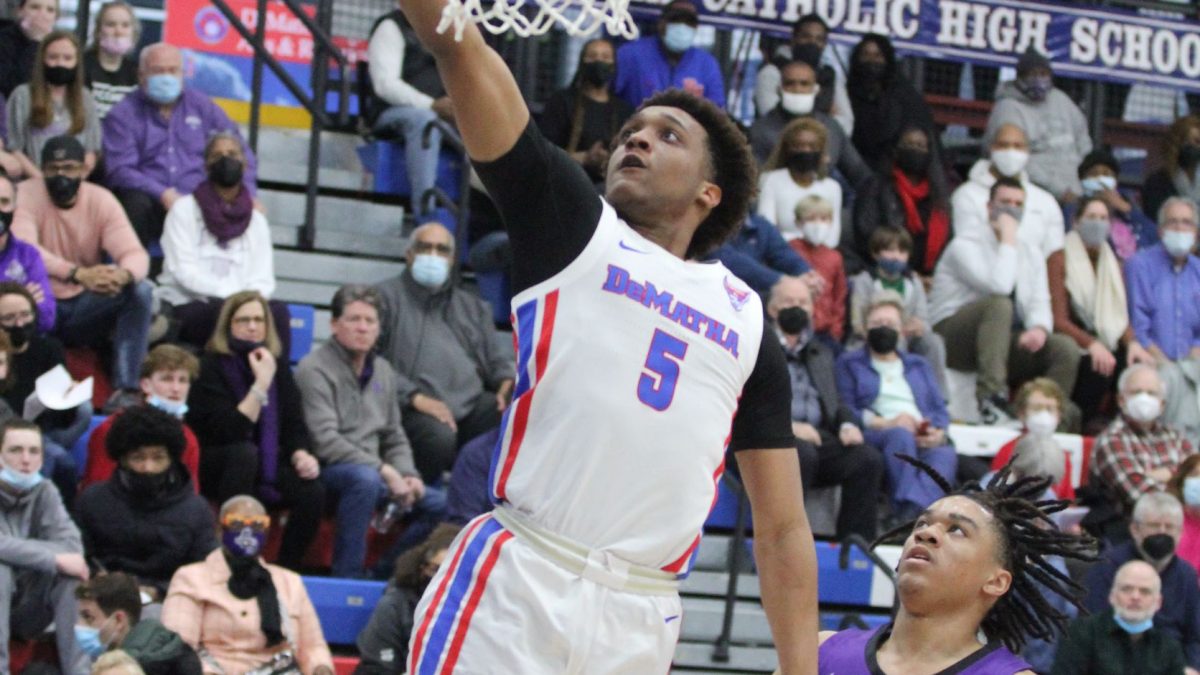 DeMatha’s seniors had no idea they’d have a different head coach last year at this time. But when Mike Jones left for a job at Virginia Tech, the Stags found themselves led by former DeMatha player and assistant Pete Strickland.

There were some tough patches along the way, but for the most part the players and coaches performed like a typical Stags team. DeMatha concluded its home schedule with a 62-56 Senior Night victory over Gonzaga on Feb. 18.

Strickland was particularly happy for the players who started their final home game at the Looney Convocation Center: Aaron and Jerrell Roberson, Tyrell Ward, Bryson Hill and Rodney Rice.

“Senior Night is what gives it that cherry-on-top sort of ingredient,” said Strickland, who is serving this season as the interim head coach. “These guys lost their coach. He was a great coach and a great guy – a DeMatha man, one of our icons. And that was hard for them.

“So this just really makes it special for those guys because they’ve endured some hardships. And none of them self-inflicted, just the nature of a change.”

Ward and Rice scored all of the Stags’ 17 fourth-quarter points of their Washington Catholic Athletic Conference win against the Eagles. Ward finished with a game-high 25 points. Rice had 17, and Jerrell Roberson nine.

Clinging to a one-point lead, Rice scored on a slam dunk and a free throw to put DeMatha on top 56-52 with 2:00 to go. Hill took a charge under the basket, and Ward followed with a steal and driving layup to boost the lead to six. Rice sealed it by sinking four free throws in the final 43.7 seconds.

“I couldn’t ask for a better way to end my career out here in this gym,” Ward said. “I don’t have any words for it. It’s just great.”

The Stags, who lost their final contest in a makeup game at St. Maria Goretti in Hagerstown on Feb. 20, finished the regular season 17-6 (12-3 WCAC).

Against Gonzaga, DeMatha led by seven late in the second quarter before going into halftime on top 23-22. The second of Ward’s three 3-pointers gave the Stags an eight-point advantage, but they could never quite pull away. The Eagles came nearly all the way back to trail by just 53-52 with 2:37 remaining.

“At the end of the day, basketball is a game of runs,” Rice said. “They’re gonna go on their run; we’re gonna go on our run. We just had to stick through adversity during their run. Just stay strong, take care of the ball, hit shots when we can.”

“If it was the other way around, we’d just have that empty feeling in our bodies,” he said. “So, I feel like it was important to get that win.”

Strickland and Jones both played under the legendary Morgan Wootten. Strickland graduated in 1975 and then went to Pittsburgh. Jones finished his Stags career in 1991 and played at Old Dominion. Both competed as professionals overseas. Wootten shaped much of their approach to coaching.

Despite the similarities, the current Stags were much more familiar with Jones, who succeeded Wootten in 2002 and won more than 500 games.

“While Mike and I are both very similar in terms of style of play and the way we approach the game, the way we approach kids, it’s still different,” Strickland said. “So, I think it’s so neat to have come through all that and get a win like this where they can really share it with everybody.”

Tournament Gets Underway – DeMatha will play St. John’s in the quarterfinals of the WCAC Tournament on Saturday Feb. 26 at 4:15 p.m. St. Paul VI is the top seed, and Bishop McNamara is second.

The games are at Robinson High School in Fairfax, Va., and will be broadcast live by First Amendment Sports.

The Stags, currently ranked fifth by The Washington Post, defeated No. 20 St. John’s 64-56 on the road Jan. 28. The victory came during a stretch in which DeMatha won 11 of 12 WCAC contests.

“We’re playing well,” Strickland said. “It’s an ascendancy that has nothing to do with our wins and losses. I feel good about the way we’re playing.”

St. John’s (13-11) is much better than its record indicates. If the Stags prevail, they will play the winner of the Good Counsel/McNamara game.

Beating Gonzaga “feels great, but we’ve got to get ready for the playoffs – stay focused and get back to work,” Rice said. “I still think we can play a little bit tougher, but that’ll come. I like where we are.”