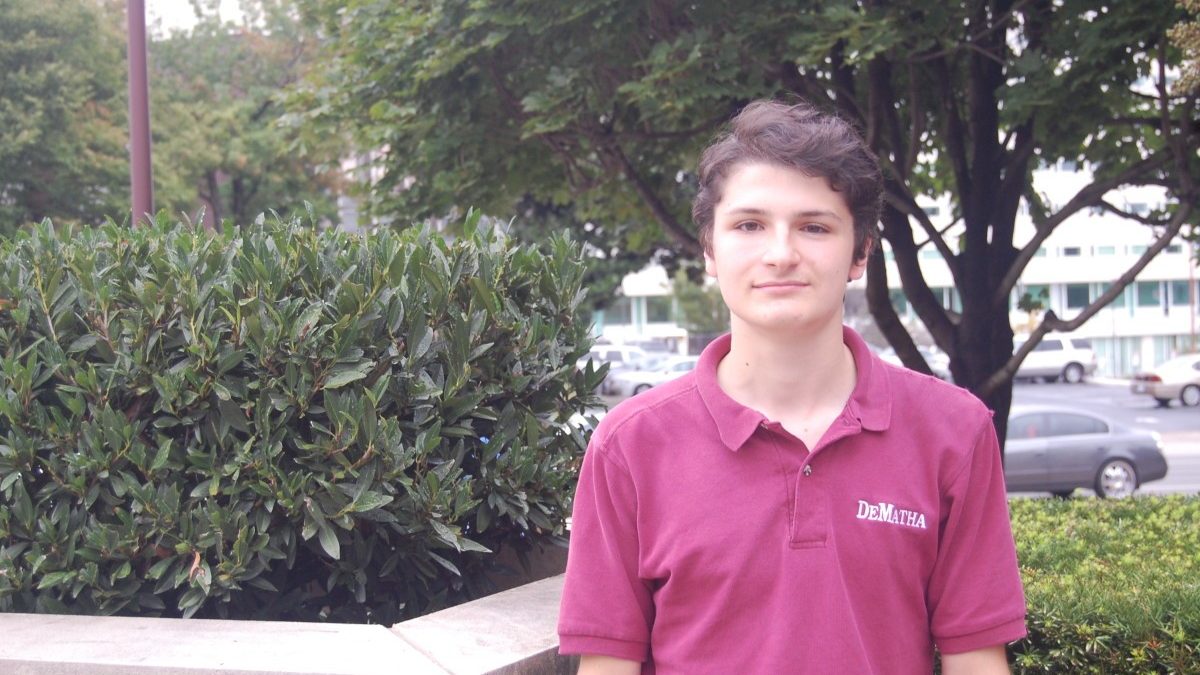 BY JAKE EISENBERG — His name is John-Paul Teti, but his friends call him “JP.”

The DeMatha Catholic High School senior and Hyattsville resident was recently named a National Merit Scholar Semi-Finalist as a result of his high score on the Practice Student Aptitude Test (PSAT). The cutoff for the state of Maryland was 221 out of 240, the fifth-highest cutoff in the nation. Teti scored a 222, equivalent to a 2200 on the Student Aptitude Test (SAT).

Approximately 16,000 of the 1.4 million students who take the test nationally are notified that they are semi-finalists. In February, about 15,000 will qualify as finalists, with approximately 7,600 of the finalists receiving Merit Scholarships. The next step is to complete a detailed scholarship application, which includes, among other things, an academic record, community activities and honors.

“Being a National Merit Semi-Finalist is an honor and a rewarding recognition of my work and effort,” said Teti.

Teti is the oldest of three brothers and sisters—Rachel, 15, Joseph, 13, and Lincoln, 10. He also mentors elementary school children, tutoring them in various subjects at St. Jerome’s Academy, and volunteers at St. Jerome’s Church as an altar server.

His schedule is filled with Advanced Placement (AP) classes—Calculus BC, Physics C, Government and Literature—leading to larger and more difficult amounts of homework. He  also sings baritone in the school’s chorus and is the captain of the the Academic Quiz Bowl team.

However, his true passion lies in computer science. Around the age of seven, he happened upon a book about HTML coding in the school library at St. Jerome’s Academy and was instantly hooked.

“I have no idea why I took that book out. I had no idea what it meant and didn’t understand most of it, said Teti. “I was looking through it and said, ‘Oh, this is cool, I sort of get this.’”

Near the end of 7th Grade, teachers began to recognize his affinity for computers and would occasionally ask him for IT help. That summer, he wrote a fledgling grade-counting website.

“I wouldn’t say I was great at it, but it doesn’t take being great—you just need to be a little bit better than everyone else,” he said.

Toward the end of his sophomore year, he began developing his first iPhone application. Teti wanted to keep track of his grades with an application, but could not find one that fit his need on the App Store. It was then that he taught himself the iOS coding language, Operation C, and built his first app, called “Studies.”

“I decided to do it myself. It seemed like a simple thing to do and I wanted to learn anyway,” he said.

This fall, like most other seniors in high school, Teti will be applying to colleges, looking specifically for a school with a good computer science program. One day, he hopes to use his computer skills to ease the daily lives of the people around him.

“I’d like to find some sort of really interesting problem that can be solved with computers, iPhones—all this new technology we have—and put together the thing that solves it for people,” he said.

Nature Nearby: A nice-smelling invader

Apartments now under construction by Safeway