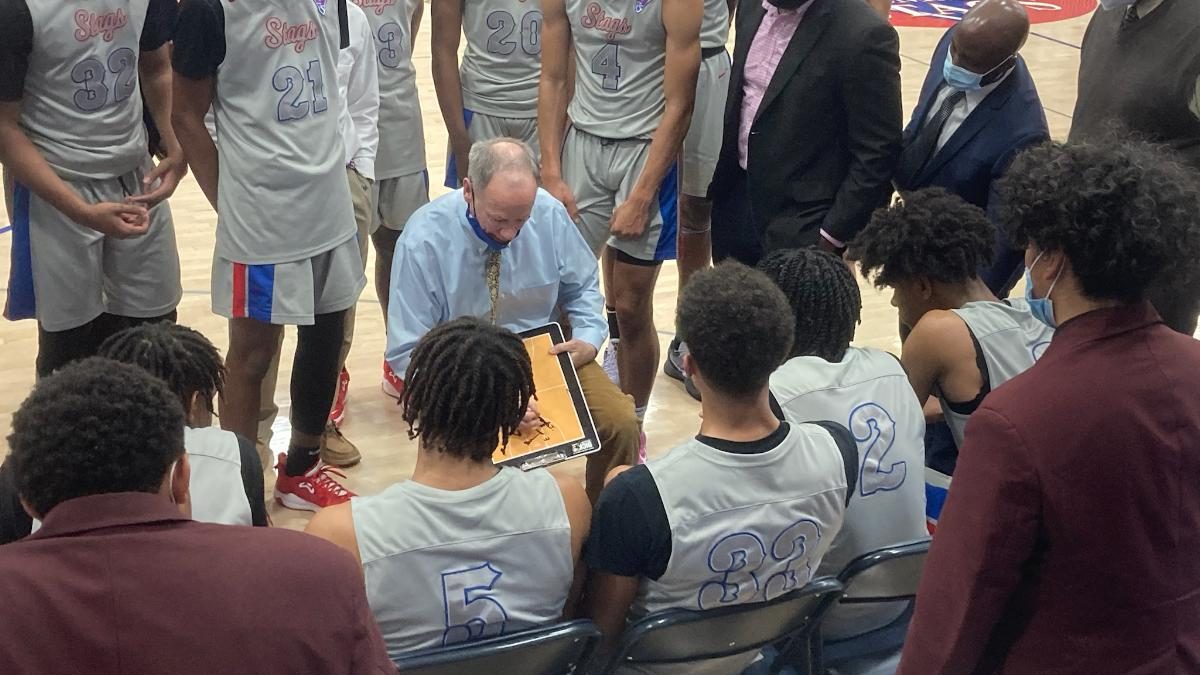 DeMatha interim head coach Pete Strickland diagrams a play for his team during a break in the Stags’ 77-50 victory over No. 1 Bishop McNamara on Jan 25. Courtesy of Chris McManes.
Hyattsville

DeMatha runs win streak to five with 27-point victory over No. 1 McNamara

You wouldn’t have known No. 10 DeMatha was playing its fifth game in eight days Tuesday night by the energy level it displayed from the opening tip.

The Stags surged to a 13-2 lead and never trailed in a 77-50 home victory over No. 1 Bishop McNamara. With its fifth-straight win, DeMatha improved to 11-4 and 6-2 in the Washington Catholic Athletic Conference. The Mustangs fell to 11-1 and 6-1.

“The energy we brought is indicative of the fact that [the players] have taken care of their bodies and gotten their rest,” DeMatha interim head coach Pete Strickland said. “They’ve eaten well, and we’ve stayed healthy and played with energy.”

Seniors Rodney Rice and Tyrell Ward paced the Stags offensively. Rice scored 16 of his 23 points in the first half. Ward, who sat out most of the half with two fouls, tallied 13 of his 20 points after halftime.

COVID-19-related cancellations and restrictions have compressed DeMatha’s schedule. The Stags missed eight games during a 27-day break, including a tournament in the San Diego area. And they only held six practices during that time.

DeMatha was 6-1 after winning at St. Mary’s Ryken on Dec. 15. It didn’t play again until Jan. 11, a 14-point loss at then-top-ranked Gonzaga. The Stags returned home to the Looney Convocation Center the next night and lost to Bishop O’Connell, 72-65.

The Knights jumped to a 12-0 lead in that game, and at one point in the first half, DeMatha had as many turnovers (10) as points. On. Jan. 15, the Stags’ losing streak reached three with an 86-65 loss in Massachusetts against nationally ranked Montverde (Fla.) Academy.

“We were playing really well on December 15th … and felt good about where we were,” Strickland said. “But that absence [made] it difficult to bounce back right away. I’m real pleased with the way we’ve stuck to it and stayed together. Now we’re playing our best basketball.”

DeMatha’s full arsenal was on display against McNamara, which came into the game having won at Gonzaga and at home vs. O’Connell. The Stags forced three Mustang turnovers in the opening three-and-a-half minutes and led by 11. They closed the period on a 9-1 run to lead 24-7.

Rice had eight points in the quarter and Ward 7. Jerrell Roberson scored seven points, including a 3-pointer and a slam dunk off a Ward pass. Ward picked up his second personal foul with 1:20 left in the period and sat out the rest of the half.

DeMatha was ahead by 15 points at halftime and scored the first 10 points after the break to build a commanding 47-22 advantage.

Roberson, a 6-foot-9 senior who has signed with James Madison, finished with 10 points and three blocks. For much of the night, he was guarding McNamara’s 6-11 center Favour Aire, who’s heading to South Florida to play for Miami. Roberson helped hold him to 10 points, 4.5 below his season average.

“Jerrell is nothing if not consistent,” Strickland said. “He did a great job of stopping their big guy early. He kind of got us going there. We believe in Jerrell.” Strickland, a 1975 DeMatha graduate who took over for Mike Jones, was happy with his team’s defensive mindset and execution. The Stags did a particularly good job of turning steals and turnovers into points. The Mustangs finished with 18 turnovers.

“We’re opportunistic defensively, and we are getting better at the true tenets of defense as well,” Strickland said. “We have some real anticipators, some ballhawks. We’re playing some defenses that allow us to play disruptive defense.”

One of DeMatha’s biggest recent wins was 90-86 on Jan. 19 at Archbishop Carroll in double overtime. Rice, a Virginia Tech recruit, scored a career-high 35 points that night. Ward, who’s going to Xavier, had 28.

“They did a great job defensively, took us out of things we like to run,” Keithline said. “It’s a lesson learned tonight. I don’t look at it as a loss, but a lesson. I try to look at it that way with the young men. It was a tough night for us, but we’re going to come back tomorrow stronger in practice.”

Secondhand News: Green Owl Design is changing the face of Hyattsville, one storefront at a time

Miss Floribunda: Toto, I have a feeling we’re not in Maryland anymore