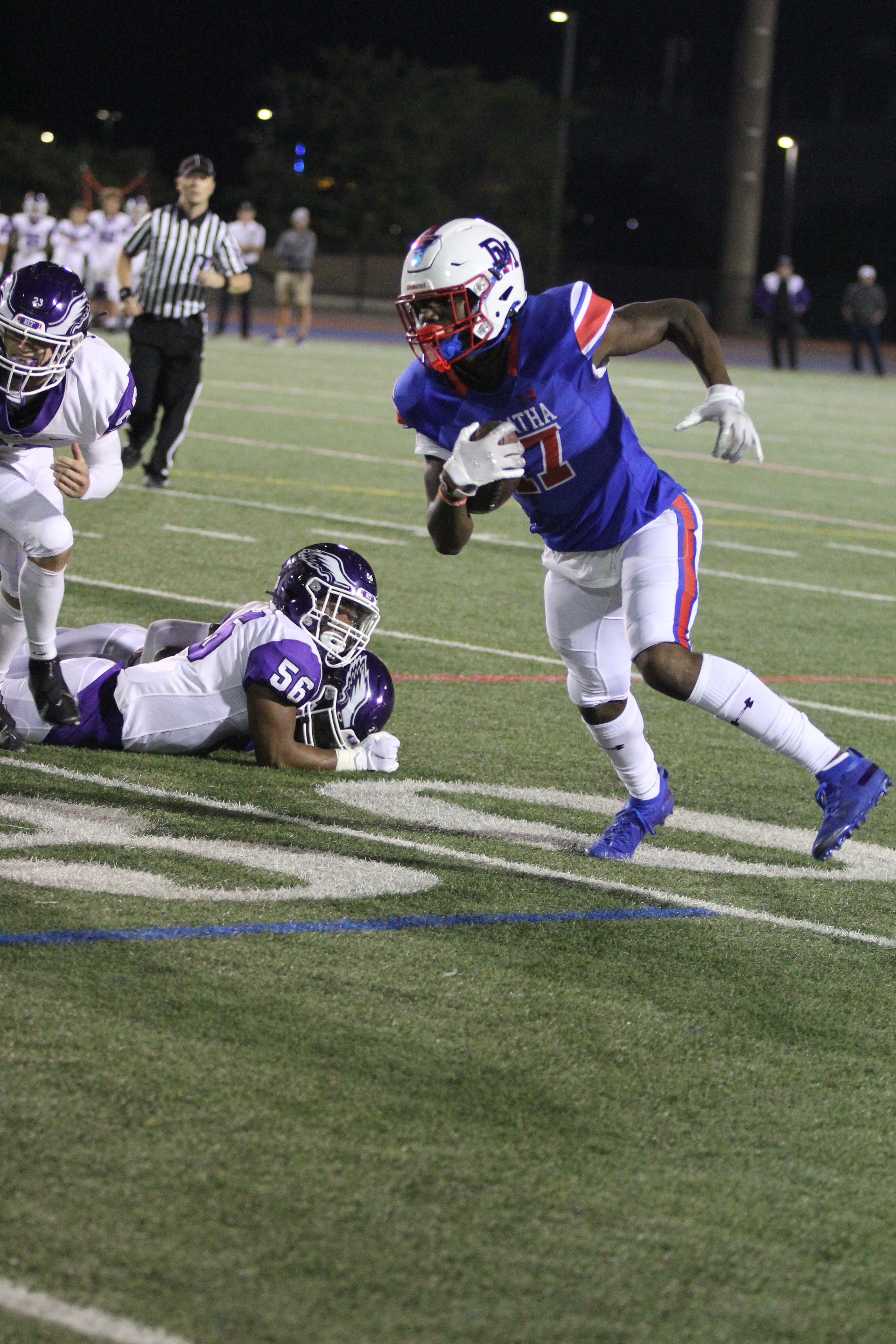 Winston caught four passes for 102 yards and a score. The senior wide receiver/defensive back had his best offensive performance of the season.

“The stage is never too big for K.J.,” Stags Coach Bill McGregor said. “We have a saying, ‘big people play big in big games.’ This was a big game and you saw how he played – nobody’s better. He’s the absolute best.”

In the Washington Catholic Athletic Conference opener for both teams, No. 9 DeMatha moved to 5-1 overall. Gonzaga, ranked sixth, fell to 4-3. It was the Stags’ most complete win of the year.

“It was a good team win,” McGregor said. “We played a very, very good football team. We came out and did what we had to do.”

Winston set up DeMatha’s first TD with a 44-yard “hitch-and-go” from Gardner to the Eagles’ 6-yard-line.

“I had to set the [defensive back] up; he bit on [my first move] a little bit and I just had to run past him,” Winston said. “Denzel put a great throw out there, got me away from the safety and I caught it.”

Brendon Wyatt scored from the 2 three plays later to put the Stags on top 10-0 just before halftime. The junior carried the ball 18 times for 72 yards.

Gonzaga got on the scoreboard when Austin Lathrop blocked Daniel Holbrook’s punt and Maxwell Edmonds recovered it in the end zone. Although DeMatha senior Zilan Williams blocked the extra point, the Eagles had the momentum.

Winston took the ensuing kickoff at his 1 and returned it 78 yards. Following his blocking, he sprinted down the right sideline before Patrick McMahon knocked him out of bounds at the Gonzaga 21.

“Coming off the blocked kick and touchdown, I knew we had to get us back going; everyone was down,” Winston said. “So I had to make a play to get us going. I just took the lane and ran away with it.”

After a 2-yard loss and a pair of holding penalties pushed the Stags back 24 yards, Gardner and Winston hooked up for a 45-yard TD and 17-6 lead. Gardner also found junior Kalen Cobb for a 35-yard score with 4:18 to go in the third quarter.

“There are a lot of things we’ve got to do better, but offensively I feel like that’s the best we’ve played all season,” Winston said. “I’d call it a complete win, but there’s always stuff we can work on.”

Rookie doing his part – Gardner finished 10 of 16 for 213 yards, three touchdowns and one interception. Four of his completions went for 31 yards or more. The freshman was making his fifth-straight start after senior Blake Kendall was lost for the season on Aug. 28.

“[Denzel’s] just one piece of the puzzle,” McGregor said. “In order for those [long pass] plays to happen, 10 other guys on that field have to make plays. The offensive line did a great job with protection, the receivers did a great job running the routes, we caught the ball and he delivered the ball.

“It’s everybody contributing to our success. I thought Denzel did some pretty good things, but again there’s a lot of improvement he has to [make] too. It’s one step at a time.”

Defense hard to penetrate – DeMatha has allowed just 33 points in six games. Until Gonzaga scored, it had held opponents scoreless for 12 straight quarters.

The Stags forced the Eagles to punt eight times and recorded three sacks. Gonzaga’s deepest penetration was to the DeMatha 19.

“I feel like we played great defense,” Winston said. “We had them for a shutout minus the blocked punt.”

McGregor recognized each of his defensive coaches by name, starting with defensive coordinator Deno Campbell.

“They put a lot of time and effort into it,” McGregor said. “We fortunately have had some pretty good results.”

Stellar on both sides of the ball – The 6-foot-3, 210-pound Winston has committed to attend Penn State as a defender, but don’t be surprised if the Nittany Lions also tap into his offensive firepower.

“Right now, it’s for defense,” he said. “I committed for safety.”

McGregor calls Winston a “special” player, one of the best in the Washington area: “He’s a great football player.”

Governor stops by – Maryland Gov. Larry Hogan, who attended DeMatha for two years before moving to Florida, did the coin toss. The Stags won it and deferred to the second half. Hogan sat in front of the press box for most of the game.

Good Counsel (4-2) remained seventh, and Gonzaga dropped to No. 11. Those two play each other in Northwest Washington on Saturday Oct. 16. The Stags play at Bishop McNamara (3-2) at noon.

St. John’s has the week off before playing DeMatha in Landover on Friday Oct. 22.

“It’s one game at a time in the WCAC, and there’s not much difference between any of us,” McGregor said. “And you know each game is going to be a slugfest.”

THE ZOMBIES ARE COMING!

Non-US citizens one step closer to voting in local elections

PHOTOS: Metal art house and other gems on 2016 house tour