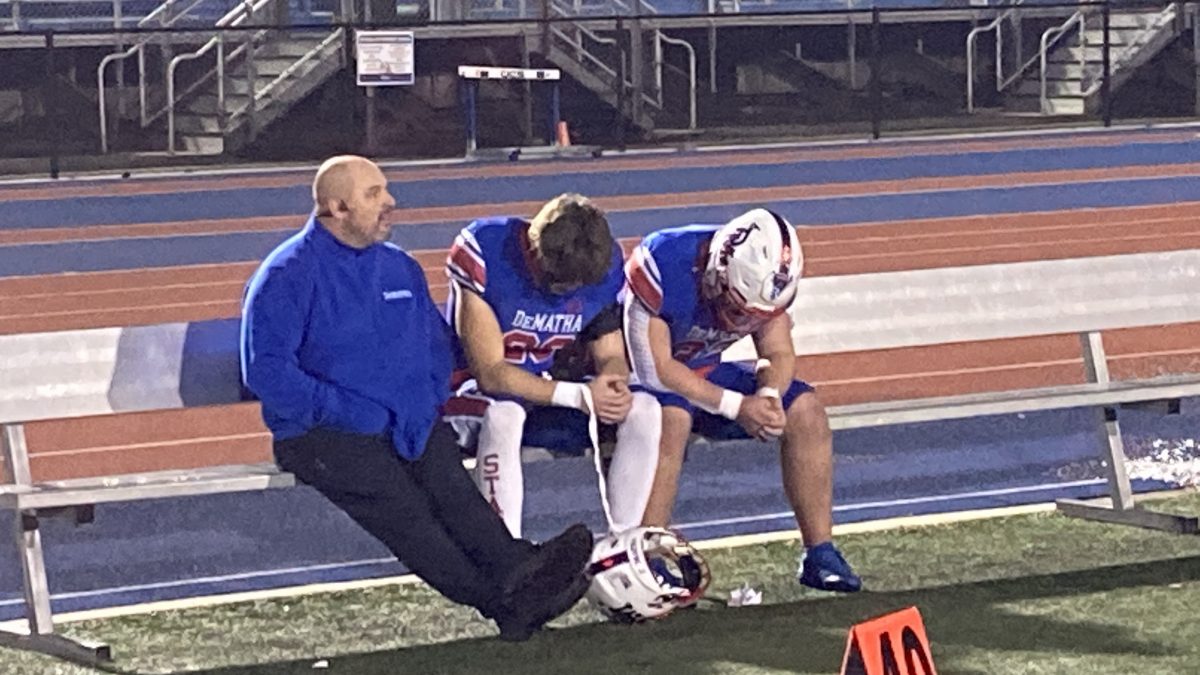 Good Counsel, one week after losing to DeMatha 28-0, made sure the sequel was nothing like the original.

The Falcons scored the first time they had the ball and built a 14-0 lead en route to a 17-15 victory at Wilson Stadium in Landover on Friday Nov. 12. The Stags’ main problem in the Washington Catholic Athletic Conference playoff semifinal was an out of synch offense.

“That was the difference between the games,” DeMatha Coach Bill McGregor said. “Last week, we had some things going in the passing game and the running game. Tonight, we had to make some plays offensively, but we never got it going.”

“It’s definitely disappointing,” Moore said. “I feel bad for the seniors. All that work we put in, and we didn’t accomplish our goal.”

With the win, Good Counsel will meet St. John’s for the WCAC Capital Division championship in Landover on Sunday Nov. 21 at 5 p.m. The Falcons defeated the Cadets in 2019, the last time the game was contested.

“Coach Gorgone and the defensive staff did a phenomenal job,” Stefanelli said. “They had a great gameplan coming in. … The defense played great. They bailed us out.”

Good Counsel drove 80 yards on its opening possession and scored on an 8-yard pass from Frankie Weaver to Elijah Moore. The key play was a 49-yard catch-and-run by Joe Comello. The senior had four receptions in the first quarter.

“He’s a great player,” Stefanelli said. “He has a knack for getting open, for finding seams in the defense and making plays. He’s had a great year.”

Weaver punctuated the Falcons’ third series – an 81-yard drive – with a 20-yard completion to Shane Carroll to give Good Counsel a 14-point lead early in the second quarter.

“We came out a little slow,” Jason Moore said. “We gave up a lot of yards that we shouldn’t have, on stuff we worked on.”

Moore got the Stags on the board with a strip sack and fumble recovery TD inside the Falcons’ 5-yard line. Dylan Gooden blocked the DeMatha extra point.

The Stags trimmed the Good Counsel advantage to 14-9 with 7:25 left in the third period on a 42-yard field goal by Daniel Holbrook. John Reyes restored the Falcons’ eight-point lead early in the fourth with a 43-yard field goal.

DeMatha had a golden opportunity to score when it recovered a fumbled punt at the Good Counsel 29. But after a sack and holding penalty put the Stags in a fourth-and-21 situation from the Falcons’ 40, they punted.

“You’ve got to be able to cash in,” McGregor said. “When we had that short field there, you’ve got to get something out of it – a field goal, a touchdown. Something has to happen, and we didn’t do it.”

After the DeMatha defense produced a three-and-out, Good Counsel bobbled the snap on the punt. The Stags took over on their opponent’s 10. On third down, Gardner found K.J. Winston for a 5-yard TD to bring DeMatha to within 17-15.

On the two-point conversion, Gardner rolled right but couldn’t find anyone open in the end zone. He tried to run it in but was pushed out of bounds at the 2.

With 3:00 to play and no timeouts, the Stags were unsuccessful on an onside kick. The Falcons ran three running plays to bleed the clock. Following another punt, DeMatha got the ball back at its 24. The game ended on a Stags’ penalty.

“The thing I was proud about [is] we didn’t quit,” McGregor said. “We made it a full four-quarter game. We fought to the last second.”

“It’s hard to beat somebody two times in a row,” he said. “They went back to the drawing board, and they had a really good gameplan coming out after us. I thought they did a heck of a job.”

Moore does it all – Moore did a little bit of everything for DeMatha on Friday. He batted down the first two passes, had five tackles, two sacks and recorded his first touchdown. On the score, he hit the quarterback’s arm to jar the ball loose, plucked it out of the air and went into the end zone.

The Washington Post named him one of its four Players of the Week.

“Jason was fantastic,” McGregor said. “He could not have played any better than he did. He took over the ballgame.”

“He’s a great player, a legit first-team All-American,” McGregor said. “He’s as fine a football player as you have anywhere in the country.”

Moore was preceded at DeMatha by his brother, Justin, now a junior basketball star at Villanova. Jason played two years of varsity basketball for the Stags before giving it up this season to concentrate on football.

Bright future – DeMatha only had 14 seniors on this year’s team.

“We’ve got to get some offensive firepower going a little bit, but we’re young,” McGregor said. “We’ve got a lot of guys coming back on offense. We’ll look to the future and see what happens.”

The Stags outscored their 10 opponents 243 to 80. The 17 points they allowed to Good Counsel were the most they gave up all season. They won three games by shutout. Sophomore linebacker Simeon Coleman had an interception Friday.

“I think the defense was fantastic,” McGregor said. “They kept us in the game all year.”

Traffic calming measures under review for Jefferson and Nicholson Streets

Nature Nearby: A smelly harbinger of spring