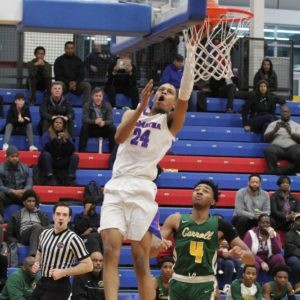 The Varsity boys basketball game vs. DeMatha has been postponed due to an unplanned water shut off at Bishop O’Connell today. The coaches will work together to find a new date.

By CHRIS McMANES — Mike Jones had a tough day Wednesday. Tonight might be even tougher.

Jones, head coach of the DeMatha basketball team, had to deal Wednesday with the grief of losing his former coach, Morgan Wootten. He also had to prepare his team to play a conference game that night.

This evening, Jones will take his Stags to Arlington, Va., for a game against Bishop O’Connell. The Knights are coached by Wootten’s son, Joe. The friends and former teammates played for Coach Wootten prior to graduating from DeMatha in 1991.

“I think that will be tougher than maybe [Wednesday night] was because I know my emotions and how I’m feeling. I could not even pretend to imagine what Joe’s going through,” Jones said. “That will be a moment where the DeMatha brotherhood will really stand out.”

The Stags had no trouble dispatching Archbishop Carroll, 76-34, on Wednesday night in Hyattsville. They have not lost since falling at the nation’s top-ranked team, Montverde (Fla.) Academy on Dec. 12. DeMatha, ranked No. 1 in the area and third in the nation, takes a 13-game winning streak into tonight’s Washington Catholic Athletic Conference contest.

“Just playing at O’Connell in general is tough,” Stags senior Hunter Dickinson said. “I’ve personally never won there. It’s going to be a tough game regardless of what happened [this week]. We’re just going to go in there and try to play our best again.”

“We had a moment of silence during the beginning of the day,” he said. “It was a lot quieter on campus.”

Dickinson said he met Wootten a couple times when the coach and his wife, Kathy, would take early morning walks around the Looney Convocation Center.

Sunday’s home game against Good Counsel has been postponed as Morgan and Kathy Wootten Gymnasium will host viewings Saturday and Sunday. The funeral Mass will be there Monday morning. Students have the day off but many will attend.

Jones, a member of Wootten’s second undefeated team (30-0 in 1990-91), was on Wootten’s coaching staff for four years before succeeding him prior to the start of the 2002-03 season.

At the time of his resignation, Wootten’s 1,274 victories made him the winningest coach in high school basketball history. He had led the Stags to 33 Catholic league championships in 46 years. In 2000, he became the first exclusively high school coach to be inducted into the Naismith Memorial Basketball Hall of Fame.

When Jones took the keys to the DeMatha juggernaut, he knew he couldn’t live up to Wootten’s legacy.

“It’s impossible,” he said. “I learned a long time ago, ‘Don’t try to do that.’ To be honest with you, when I first got the job, that’s one of the things coach said in his own way. He didn’t say, ‘Don’t try to live up to me’ because he’s too humble to say that. But he did say to make sure that I did things my way and don’t try to just do what he did. He said kids are smart enough. They’ll know that it’s not genuine.

“It took me a while to truly understand what that meant, but I thank him so much. He almost gave me permission to do things my way. Without that, who wants to change what’s worked for 46 years?”

Jones has coached an NBA All-Star (Victor Oladipo) and the top pick in the 2017 NBA Draft (Markelle Fultz). He has 485 career victories and will celebrate No. 500 either this year or next. In 2006, he led the 34-1 Stags to their sixth national title.

“I think Coach [Wootten] took it as his responsibility to make sure that he helped me anyway he could,” Jones said. “I remember game number one over in the old gym. I remember right before jump ball looking up at him on the balcony, and in coach Wootten fashion, he gave me the thumbs up. Somebody snapped a picture of that.

“I don’t think I’ll ever be able to look at that picture the same again.”

Chris McManes is an assistant baseball coach at DeMatha.

PHOTOS: Riders speed through the city during Route 1 Rampage

Quick-strike DeMatha improves to 3-0 with dominating second half