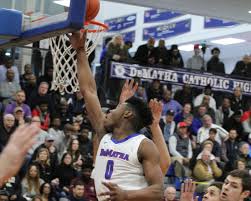 By CHRIS MCMANES — Games like this are why the Washington Catholic Athletic Conference is regarded as the nation’s premier high school basketball conference.

In a matchup of the area’s top two teams, No. 1 DeMatha slipped past Paul VI, 62-60, in front of a standing-room-only crowd at the Looney Convocation Center on Tuesday night. The Stags (18-2, 10-0 WCAC) needed a 3-pointer and a block in the final 45 seconds to prevail.

“It was a great WCAC atmosphere,” DeMatha Coach Mike Jones said. “For two teams out of the many in our league that are capable of winning this thing, I don’t think anyone expected anything less.”

The Stags were ensured victory when 7-foot-2 center Hunter Dickinson got a hand on Tyler Coleman’s 3-point attempt. Dickinson grabbed the rebound and threw the ball downcourt as time expired. It was the latest in a series of highlight-reel plays the Michigan recruit has made in his four years on Madison Street.

“As big as he is, many times he has to guard people away from the basket,” Jones said. “It was a great play. I’m glad he’s on our side.”

The 18-year DeMatha coach is also happy to have Jordan Hawkins on his side. The junior transfer from Gaithersburg High scored a team-high-tying 17 points, including the winning 3-pointer.

“He played very well,” Jones said. “We absolutely needed every one of his baskets.”

Dickinson added 17 points, 15 boards, three assists and two blocks for DeMatha, which won its 14th in a row.

Both teams came out firing, combining for seven 3-pointers in the first quarter, including one from NBA range by Panther point guard Jeremy Roach.

After Timberlake blocked Roach’s open-court layup attempt, Stags junior Will Reynolds (nine points) followed a miss with a one-handed slam dunk. He added a fastbreak dunk and assisted trey to give DeMatha a 23-15 lead early in the second period.

The advantage remained at eight points when Timberlake found Dickinson for a 3-ball from the left wing. Paul VI sophomore Knasir “Dug” McDaniel kept his team close by hitting three triples and scoring 13 of his game-high 20 points in the first half.

Hawkins scored the Stags’ first eight points following intermission on a pair of free throws and two treys. Up 43-36, DeMatha had a chance to increase its advantage after senior Donovan Miller took a charge from Roach en route to the basket.

Roach, a lightning-quick senior who will play at Duke, ended the third quarter and began the fourth with driving layups as the Panthers (16-5, 10-2) took the lead for just the second time, 51-50.

The Stags responded by scoring the next seven points, punctuated by Dickinson’s 3-pointer from the top of the key. Paul VI answered in kind to lead, 58-57, with 2:53 remaining. Dickinson and Timberlake turned the ball over on consecutive possessions, but the Panthers couldn’t capitalize.

Hawkins tipped in a miss, and McDaniel scored with just under a minute to play to put Paul VI ahead, 60-59. On the ensuing possession, Dickinson located Hawkins on the left wing, and the 6-4 wing nailed his third 3-pointer.

Following a Panthers’ miss under the basket, Hawkins got fouled with 20.5 seconds remaining but missed the front end of the one-and-one. Paul VI worked the ball around to Coleman, whose 3-point try traveled but a few feet after Dickinson’s block.

Because of his size and ability, Dickinson presents matchup problems on both ends of the floor. Offensively, he has added to his dominance inside with a soft shooting touch from mid-range and long distance.

“He can score at all three levels,” Panthers Coach Glenn Farello said. “He can step out and score, and he’s also a great passer. He kicked [the ball] out for the three that put them ahead. I think he’s a heck of a talent.

“I’ve always appreciated how skilled he is. He’s obviously a big presence in there, but he does a little bit of everything to help them win.”

“He had a great second half,” Jones said. “He got fouled early on in the half and made a couple buckets. So, he got to see the ball go through the net, and after he was able to do that, I think that got his confidence going.”

Farello in his 13th season at the Fairfax, Va., school, agreed it was a great conference matchup.

“Absolutely,” Farello said. “I thought both teams fought hard. I thought they both defended. Give DeMatha complete credit on playing better defense than us. They were able to limit our opportunities.

“It comes down to the last minute of the game like it typically does between the two us, and they were able to hit the shot that they needed, and we weren’t able to do it ourselves.”

The Stags were happy to be caught up in the on-court delirium when the DeMatha student section stormed the court in celebration.

“The team really wanted to go out there and say thank you to [our fellow students] for coming out,” Dickinson said. “That’s probably one of the biggest crowds we’ve had since Gonzaga came here my freshman year.”

Paul VI, which will be moving to a new campus in South Riding, Va., will play its final regular-season home game in Fairfax against DeMatha on Sunday Feb. 16.

Farello expects Roach to continue improving after missing all of last season with a torn ACL in his right knee. Scout.com ranks him the nation’s No. 2 point guard in the class of 2020.

“We knew in January he’d be better than he was in December,” Farello said. “I’m excited to see how February’s going to be better than January because he’s pretty good. He was a big part of the reason we were able to come back and take the lead.

“We’re real excited to see him keep getting better.”

Jones wants to see his team improve in taking care of the basketball. The Stags turned the ball over way too much on traveling calls and ill-advised cross-court passes.

“We didn’t take care of the ball,” Jones said. “That was number two on our to-do list for tonight. We did not do a very good job of that, and I’m sure we’ll work hard to make sure it’s not an issue the next time we play them.”

See highlights of the game from Capitol Hoops.

Stags support Coach Jones, honor Coach Wootten – The normally upbeat atmosphere at DeMatha has been subdued the past week since the death of beloved former basketball coach Morgan Wootten, who died Jan. 21.

After defeating Archbishop Carroll at home less than 24 hours later, the Stags’ game at Bishop O’Connell on Jan. 24 was postponed due to a water shut-off. Sunday’s home game against Good Counsel was postponed until Feb. 17 because the Looney Convocation Center hosted Wootten’s viewing.

On Monday, the players handed out program’s at Wootten’s funeral on campus and helped clean up afterwards prior to practice.

DeMatha Coach Mike Jones, who played for Wootten and was one of his assistants for four years before succeeding him in 2002, leaned on his team for emotional support Monday.

“It wasn’t much of a practice,” he said. “It was more of a ‘let’s just spend some time together,’ get some shots up and support one another. To be honest with you, the biggest thing for me is I think these guys see the pain and the heartache that I’ve been in. They’ve all checked on me. [Monday’s] practice was probably more about me being around them than them being around each other.

“I love my team, and I appreciate that.”

The Stags wore “MW” patches on the upper left of their jerseys. They will be on all the club’s uniforms through the 2020-21 season.

“We just want to be there for Coach Jones and show him our support,” senior Hunter Dickinson said. “We know he’s going through a tough time right now. We’ve always got his back, no matter what.”

Upcoming WCAC games – The Stags will host Bishop Ireton on Saturday at 4:30 p.m. They will travel to Good Counsel on Tuesday Feb. 4 and play at The Heights the following day.

On Friday Feb. 7, DeMatha will welcome Gonzaga to the Looney Convocation Center. The Stags defeated the Eagles, 70-67, on Jan. 13. Game time is 7:30 p.m. Fans are encouraged to arrive early to ensure admission and a seat. It will likely be a sellout.