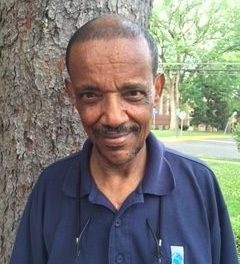 Despite many hardships, including imprisonment, Yirdaw Anteneh remains grateful for the many miracles he’s received in his life. Born and raised in northern Ethiopia, Anteneh was educated in the French school system and became a French teacher after completing university in Ethiopia’s capital city of Addis Ababa. A few months later, however, he was arrested and imprisoned by the military junta that overthrew Emperor Haile Selassie in a bloody coup d’etat.

“I was arrested for distributing suspicious readings to my students about democracy,” said Anteneh. “They chained my legs for two weeks. It happened to thousands of potentially dangerous people who would ask why, such as students and their teachers.”

During this period, known as the Red Terror, Anteneh spent two and a half years in prison where he was tortured.

“For most people like me who were detained, we were in a shelter and always waiting until they would come to kill you. We didn’t know when we would be released. There was no case, no interview.”

In 1979, Anteneh was one of the fortunate few to be released, and he resumed teaching French. He also received a scholarship allowing him to obtain additional training in France where he received a master’s degree. He eventually settled back in Ethiopia and began to teach at an American international school.

“It was a huge opportunity for me to get paid in Addis Ababa with an American salary. Life in the school was unbelievable, but outside of school life was tough. There was no democracy. For a long time I lived in fear.” Loyalty to his family kept Anteneh in Ethiopia. “I have a large family with many brothers and sisters, so I didn’t bother to stay in France so I could support my family. I couldn’t imagine staying there in anticipation of being happy there by myself.”

As fate would have it, Anteneh did have to leave his country once again, this time for health reasons. Anteneh developed a terminal liver disease and was airlifted to Nairobi for treatment due to insufficient health care in Ethiopia. Close to death, he was later able to receive a U.S. visa to come to Georgetown for a liver transplant. His ex‐wife had relocated to Washington, DC several years earlier, so he and his children, who had stayed with him in Addis Ababa, came to the U.S.

“Before I came, I thought America was the real survival of the fittest and people just matter about their own business and don’t care about you. In part because of the antagonism that the socialist government propagated in Ethiopia, so I had a misconception about that. I’m glad I was proved wrong because there are wonderful people.”

Anteneh and his children struggled for several years. Soon after his arrival, his ex‐wife developed breast cancer and subsequently committed suicide. His health still precarious, Anteneh relied on the generosity of American friends and colleagues to help them through this period.

“All the possibilities came together. So many miracles happened to me here. When I think there are millions of Americans who die every day because they don’t have liver transplants. How did I get it? I can’t explain. Now when something huge happens to me, life has taught me to live in the present, like a meditation, and I know it will pass.”

After living in Rockville and moving around from place to place, Anteneh and his children settled in Hyattsville four years ago. “I love the area. Everything is within walking distance. The house is wonderful — it’s warm and welcoming. It’s very peaceful here. I can walk from the metro — there is no fear. There is nothing better than peace when you live in an area.”

Julia Gaspar‐Bates is a cross‐cultural trainer and consultant. “Cultural Connections” is devoted to bringing forth the voices of immigrants and other foreigners who have settled in Hyattsville.

Nature Nearby: A hillside architect