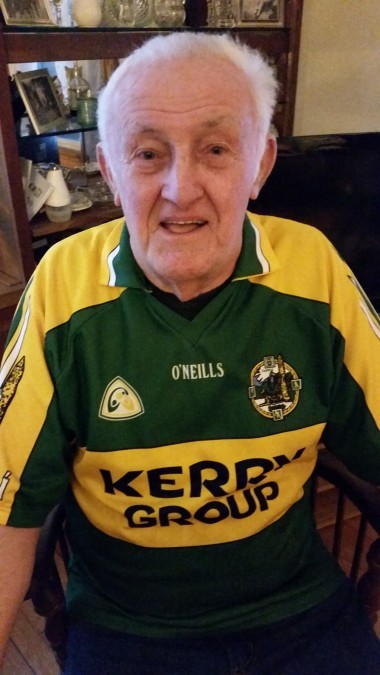 When Jimmy McAuliffe’s ship landed in New York in 1959 after leaving his native Ireland, he was overwhelmed by all the cars, lights and noise he encountered.  “It was kind of scary because I was young and I’d never traveled before. I thought to myself ‘what in the name of God have I gotten myself into?’ There were no cars back home like there are nowadays so I used a bicycle, a pony and trap.”

Growing up in a small village in County Kerry, McAuliffe was unaccustomed to the fast pace of modern life in the United States. He lived with his parents and siblings in a small house on seven acres of land. He recalls, “We had a small farm with two cows, a pony, ducks, chickens and turkeys. My mother worked with local farmers. At Christmas time, you sold turkeys in the local town to ship to England. My father worked repairing the roads on the county council.”

Although McAuliffe’s parents had lived in the U.S. in the 1920s and were married in Baltimore, they returned to Ireland before starting a family because his mother didn’t like living here. Several of her children, however, decided to tempt their fate on the other side of the Atlantic. “It was very tough economically in Ireland. A lot of people immigrated to the U.S. at that time after the war,” he said. McAuliffe worked as a farmer prior to leaving his country. “It was a lot of hard work and little pay. I worked shoveling hay, making oats, and milking cows. It was long days;you worked from six in the morning to eight at night and sometimes longer.” After a few years doing this laborious job, McAuliffe decided to follow his siblings’ lead, all of whom had settled in Prince George’s County.

“I was 23 when I arrived in the U.S. My brother worked for Giant Foods and got me a job a few days after I landed in Hyattsville and I’ve been living here since.” McAuliffe enjoyed working for Giant so much that he remained a loyal employee until he retired 42 year later. “When I first went to the warehouse the people were very welcoming. Izzy Cohen was the owner of Giant Food and he was a very good man. He opened his first store in DC in 1936, the year I was born. He was a real gentleman and was the best person I ever worked for. He treated you like a king.”

Although McAuliffe didn’t experience major culture shock settling in the U.S., at first he “found American people very strange. In the neighborhoods people wouldn’t talk to you very much. In Ireland you knew everyone around you. Here you barely know your next door neighbor.”

Indeed, in his small village in Ireland, McAuliffe knew a lot of people. “If you went to a dance hall, there might be 700 people and you would know all of them. Back in my time the Irish people were very friendly. I had an uncle and people would visit his house every night. There might be 12, 14 people chatting away. There was no TV or cell phones so people would talk.”

After getting married in 1978, McAuliffe bought the house he still lives in today. “I very much like living in Hyattsville. It’s very friendly with a lot of nice neighbors. I talk to a lot of them every day when I see them in the road.  The community hasn’t changed that much since I moved here except that younger people are moving in and older people are gone. The atmosphere is about the same.”

There is not a lot that McAuliffe misses about Ireland, although he does return every two years to visit family. He also manages to stay connected to certain aspects of his culture and gets together with Irish friends every Sunday from May to September to watch Gaelic football. “I put on my Kerry jersey and I go downtown to Chinatown where they have Irish soccer games broadcast live from an Irish pub. You can take the man out of the country but you can’t take the country out of the man.”