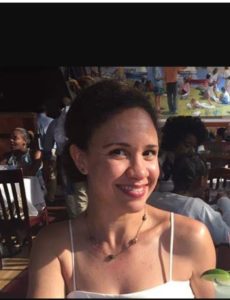 Cultural Connections: From rural to urban – A Dominican’s migration

Hyattsville Life and Times, 4 years ago

By JULIA GASPAR-BATES — Claudia Simasek has many happy memories of growing up in the rural town of San Francisco de Macoris, which is about 2.5 hours from Dominican Republic’s capital city, Santo Domingo. “It was a very communal environment. There were no walls in the backyard. All the kids in the neighborhood would play together. All the neighbors would invite you to eat. It was normal for the electricity to go off for several hours during the day, so when there was no light in the house, people would gather in the street and talk and wait for the lights to come back on. I was living in a world where there were no computers or cell phones. People are very hands-on, so you learn skills to take care of your environment. Those kinds of things for me are precious.”

Although Simasek had been traveling to the U.S. since the age of 14 to visit extended family, love eventually led her to immigrate here. She met her husband, Ben, a Peace Corps volunteer, in 2010 when she brought students to the rural Dominican town where he was working. “When I first saw Ben, I thought he was part of the community. He was dressed like a country guy, with rubber boots and a machete.”

Since communication channels were limited in Ben’s rural community, they spoke only sporadically after their initial meeting. After Ben visited her in Santo Domingo, the couple connected and began a long-distance relationship after he returned to the U.S. to complete his master’s degree. Simasek eventually joined him in D.C. and found a job as a Montessori school teacher. “I met a lot of great people from all over South America. The school had teachers from Columbia, Venezuela, Honduras, Mexico and Chile. It was a very rich experience because I had this exchange with people from many different countries. Something I really like about D.C. is how cosmopolitan it is, but it’s very relaxed.”

At the same time, Simasek experienced some culture shock. “The weather was hard, especially winter. I also couldn’t understand why Americans gather together, but they don’t dance, even on Christmas. I feel that the thing that shocked me the most is that the culture is more closed. I found it not so open as my culture, much more quiet. Not as loud and joyful. In my culture, people are more extroverted and party-oriented. At first it was very hard socially. I was missing my country, and I realized that I had taken a lot of things for granted socially.”

Simasek also learned that parenting children was very different in the U.S., particularly after opening her own day care center two years ago, Espirales Montessori Bilingual, in Hyattsville. “In my country, parents have much more authority. Here, parents are more relaxed and have to work a lot and don’t have the time to spend with their kids. At first, I couldn’t understand because in the [Dominican Republic] you don’t need a day care because you have your moms or aunties or neighbors, and you never have to pay. I started to realize that if I had a baby, that would be my future. I realized that many day cares have waiting lists and are full, so I started a day care center. What I like is that I get to give service to the people in Hyattsville.”

Hyattsville has also given back to Simasek. After arriving in the U.S., she and Ben lived in Takoma Park, which they loved. However, since housing costs were prohibitively expensive, a realtor suggested exploring Hyattsville. “When we first visited, I liked the neighborhood. People were friendly; they invited us to their home. It felt like my country. Our neighbors are now our friends. I also really like the activities. I’m involved in the Hyattsville Swap [www.hy-swap.com/], which is great for the parents. People take the time to know each other. I have met so many women, and, now that I’m a mom, it’s so great to have those connections. The community is also very relaxed.”

Despite feeling settled in her adopted country, Simasek feels nostalgic about the people back home, where everybody talks to each other and tells you their life story in five minutes. She also misses “the sense of tropical island all the time. You feel like it’s life — maybe because of the sun. It’s always bright. The energy is vibrant. Dominicans have learned how to laugh when things don’t work and look for the positive side of things, so you don’t feel so helpless. When you come to the U.S. and you see people complaining, you always think, that is nothing because in my country it is much worse. I think this is a [plus] because you learn how to find the positive of things and not complain. In the end, things work.”

“Cultural Connections” is devoted to bringing forth the voices of immigrants and other foreigners who have settled in Hyattsville.

Hyattsville Life and Times, 9 years ago 5 min read
From the Editor

From the Editor: What are the Times coming to?