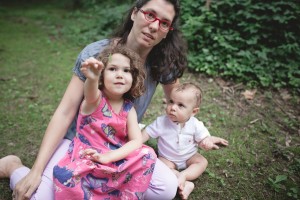 When Juliette Fradin first arrived in the U.S. from her native France seven years ago, she was impressed with the warmth of Americans.

“I was totally blown away because people here are so welcoming,” she said.  “… It’s really pleasant to live here where people are always optimistic.”

Fradin’s experience in the U.S. has been surprising on multiple fronts. Her husband Antoine was offered a teaching position at the University of Maryland. “The adventure of living in the U.S. was really appealing. There are lots of clichés about Americans in France but we are raised with American culture, so there is always this American dream. I thought it would be the same in France and U.S. since American culture is everywhere in France.  But now I can say that we are two different cultures.”

It took Fradin time to fully understand these differences and for her culture shock to subside.

“There is no spontaneity,” she said. “Everything is scheduled. You need an invitation, and they’re sent one month in advance. Here you have a party with a defined time frame. There is no possibility of just being in the moment. It’s always so busy. Last year we spent a month in Paris and people just sit around on benches or terraces reading books, watching people and socializing with friends.”

“Also, I didn’t expect to see so many churches,” she said. “I come from a country where being secular is a religion so it was really strange for me to see how many people were going to church, and God is everywhere.”

Fradin also initially struggled to find deeper connections with American people. “People are friendly but don’t necessarily want to be your friend. It was confusing for me in the beginning because people were welcoming but there was nothing behind [it],” she said. “In France it’s the opposite.  People are stiff at first and then the friendship grows slowly over time but it’s more secure.”

Eventually, Fradin was able to develop friendships  “thanks to my daughter and the Hyattsville Nurturing Moms group, which is awesome. It helped me meet new people and get me out of my shell.; being in a new country was difficult because you don’t master the language so it was hard to meet people. With kids it’s easier because there are meetings with new moms and multiple activities.”

Fradin has settled into her new country and said there are many reasons she wants to stay. “Here people really take care of each other.  People say “hi” in the streets. I like the spirit of sharing. …People give freely without expecting anything in return.”

She appreciates that living in a new country offers her the ability to reinvent herself. Prior to moving abroad, Fradin worked as a vocational counselor in Paris. Since she didn’t initially have an American work visa, she had ample time to think about what she wanted to do. She has since launched a photography business, working with several local clients.

“The first year I had to adjust a lot,” she said. “I got involved with a French association and headed up the Job Networking Club. This gave me a sense of how to seek a job in the U.S. My father was a professional photographer so I was always interested in photography. Here there’s a strong interest in family portraits. I mostly document families in their homes to capture ordinary life.”

Despite adopting the U.S. as her home, there are certain aspects of French culture that Fradin misses. “I miss the history.  Everywhere you go you have something that tells about French history — old stones, old churches or castles.  I miss cheese, charcuterie and the social life around food. In France, food is a ceremony.  Even in the average family, you have a three-course meal. I miss having some of those refined things in my life.”

Hyattsville has helped Fradin feel more at home.  “I like that Hyattsville is developing more and more. I like the sense of community. Actually this is my next photographic project — to photograph the community. Basically everyone is so proud to live in Hyattsville because of the community, because people have each other’s back, because of the mom’s group. My children will grow up in a multicultural environment that is gay friendly. I’m happy my kids are exposed to that diversity.”

Nature Nearby: Dragons and damsels in Magruder Park

Hyattsville Life and Times, 6 years ago 4 min read
Nature Nearby