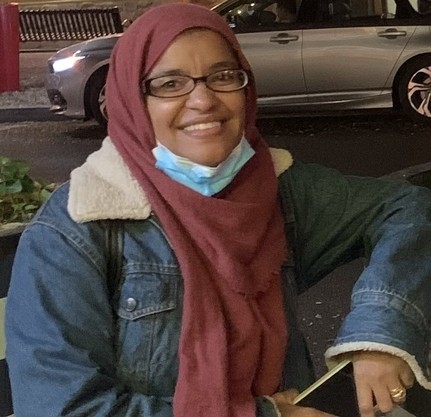 Born in Cairo, Egypt, Fawaya Mohammed spent her early years in a poor neighborhood close to the Nile river, where everyone knew each other and looked out for each other’s children. She would spend her days outside with other kids and “find things to play with, such as the top of a soda bottle, an apricot seed that we would grind on the concrete to make a hole to make a whistle, or dirt,” Mohammed explained. “We used to make mud houses. We made soccer balls out of socks or trash bags. You make the best with what you’ve got.”

Mohammed’s father was rarely home, having moved to Greece to work as a chef, given the lack of work in Egypt. A visit from him was a welcome treat. She recalls one time when he brought her a book bag. “Things were really down, and we were poor, but [my parents] always told us everything was great.”

Mohammed says that Egyptian culture stresses respect for the elderly, and even an older brother could fit that description. “When you did something wrong, there were consequences. One time my teacher told me to go to the blackboard to write the answer, and I didn’t know it, so I made a joke. The teacher pushed my head into the board, and I fell down. She acted like it was my fault. But if I said that I didn’t know the answer, I would also have gotten hit.”

She also appreciates the warmth and generosity of the Egyptians. “Egyptians are very open people. We go out of our way to give. They will invite you in, even if you don’t know them. If you can’t, you say things — dus — small prayers, such as, ‘May Allah bless you and protect you and your children.’”

“Ramadan is like Thanksgiving for 30 days. In Egypt, the family all gets together for Iftar [break fast]. You are hungry the entire day and then, at the end of the day when the sun sets, family members will come and bring a plate. You also sometimes invite your neighbors, even if they are Christians. Sometimes in solidarity, the Christians won’t eat during the day, either.”

Mohammed’s father first came to the U.S. in 1976, and the rest of the family joined him several years later, when she was 12. She was immediately awed by her new environment. “Everything was white and bright — unlike in Egypt where everything is grayish. There was no dirt in the street. There were trees and grass. I thought it was heaven because everything was perfect. We went to a park, and we saw a playground for the first time. Seeing people of different shades was exciting.”

She experienced challenges at her school in Mount Rainier where she had to repeat sixth grade twice. “We didn’t know anything. It was really hard to communicate, because I couldn’t speak English.”

She added, “What I experienced was nothing compared to what I saw on American TV. It was a shock. Nobody had guns and was going around and shooting people. I thought we were misled by what we saw on TV. You had to completely adjust what you knew, because it was different in real life. Everybody was secluded. . . instead of community. How come people don’t talk to each other?”

Mohammed’s parents worked very hard, and each of them often worked two jobs. Eventually, they started a hot dog vending business that brought more prosperity. This enabled them to buy a house in Hyattsville, where Mohammed still lives with her parents, brother, husband and children.

After graduating from University of Maryland, Mohammed decided to go back to Egypt for several years, and she met her husband there. They returned to the U.S. for the birth of their first child, as the medical care here is superior to that in Egypt. Their initial plan was to move back to Egypt in five years; however, this never happened.

Mohammed enjoys life in Hyattsville. “I like that I have everything around me. I can go to [the Mall at Prince George’s] or take the Metro and go downtown. I can take my kids to the park, and we can relax. I feel like I live on a safe street. I like volunteering for cultural events for the community.”

At the same time, she hopes to eventually return to Egypt when her kids are grown. “There is more to do in Egypt than here. It’s exciting. If you’re bored, you can go to the pyramids. If you’re stressed out, you can go sit on the Nile. You can raise your hands, and someone will bring you warm hummus. Whenever you’re tired of the people in your house, you can go out, and you don’t have to go far to visit people and just hang out.”

Cultural Connections is dedicated to bringing forth the voices of Hyattsville’s international residents. Interested in sharing your story? Please contact culturalconnections@hyattsvillelife.com.