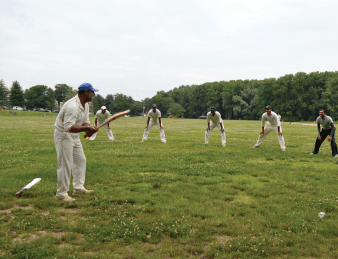 The Washington Cricket League has matches every weekend from April to September on fields around the metro area, including ones in Chillum, Riverdale Park and Adelphi. Recently, the Dulles and Virginia clubs played on the Chillum field. Photo by Megan J. Brockett.
Hyattsville

It may just be the most popular thing in town that you’ve never heard of.

The Washington Cricket League (WCL) is the largest in the D.C. metro area, boasting nearly 40 teams in three divisions.  Formed in 1974 and a member of the USA Cricket Association, the League hosts clubs from Maryland, Virginia and Washington.

And one of the 14 fields they play on is just outside of Hyattsville, on 16th Avenue near the intersection of Chillum Road, with two more in Riverdale Park and Adelphi.

WCL team members come from such countries as India, Pakistan, Sri Lanka, New Zealand, Jamaica and Trinidad, forming a melting pot of different cultures and different languages, with one common love: the game of cricket.

“It is very popular here,” said Waqas Shahid, a member of the Virginia Cricket Club. “There’s a lot of cricket in this area because … a lot of immigrants were living here and there was no other sport for them to play. They were not good in basketball or football or other games. Basically, they got into either cricket or soccer.”

Among American sports, baseball is the closest thing to cricket. But the field is more circular than diamond-shaped and it centers around a rectangular strip called a pitch. Cricket bats are flat-fronted, more like paddles than baseball bats, and the balls are harder and heavier than baseballs.

As in baseball, one team is up at bat while the other fields, and the team with the most runs at the end of the game wins. Instead of four bases, there are two wickets, at either end of the pitch; the batsman (not batter) scores each time he runs back and forth between them.

Like many WCL players, Shahid, a native of  Pakistan, grew up in a culture immersed in cricket. Before joining the League, he played professionally at the national level. So did several other players, some of whom are well known in the cricket world.

Where Shahid is from, the sport is in people’s blood, he said.

“Even if they don’t play cricket, they follow cricket so closely,” he said. “They’re glued to their TV watching the national games for their own countries and other countries.”

Bilal Razzaq, a member of the Dulles Cricket Club, described cricket in the D.C. metro area as a type of subculture, likening it to the hype surrounding Latino soccer leagues.

They’d have to be, to play in the Washington Cricket League. Matches are held every weekend from April to September, and games last about seven hours.

For Shahid, who lives in Delaware, it’s a commitment that eats up nearly 12 hours of his weekend, with the trip to Hyattsville taking about two hours each way.

“My wife [doesn’t] like it that much,” he said, smiling.  “But it’s fun. I won’t even know where the seven hours are going, to be honest; this is how exciting it gets. It’s like a child playing a sport – I still feel the same way. That’s what keeps me going.”

Cultural Connections: From rural to urban – A Dominican’s migration