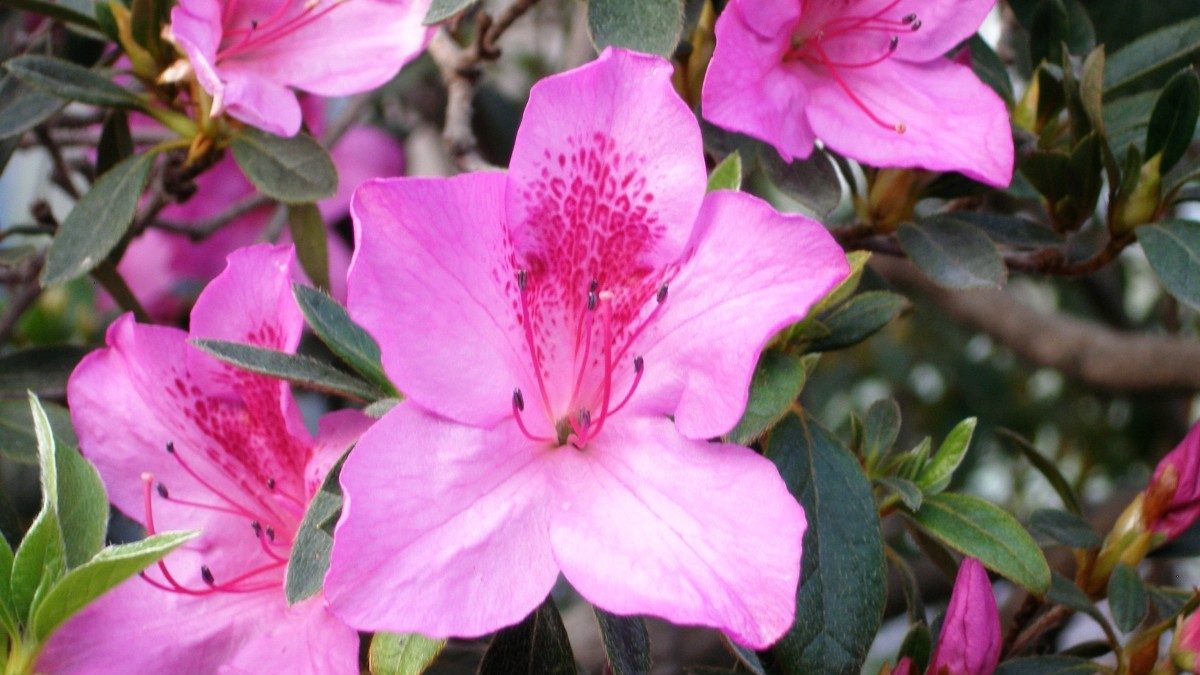 I have quite a nice collection of azalea bushes that make a beautiful display later in April, but this year I’m noticing something alarming that makes me fear it won’t happen:  The leaves have become pale with yellow splotches. Buds have formed, but I am not confident they will open – or, scarier still, that the plants will even survive. The soil is good, sufficiently acidic, and the plant is in a sunny spot.  I haven’t seen any insects. This is really a puzzling and worrisome new development.

It sounds as if you have an infestation of the larvae of lace bugs, Stephanitis pyroides of the Tingidae family. If you take a blank sheet of paper and shake the branches over it, you will probably see the bugs as black specks.

Your azalea buds will bloom as these tiny critters prefer to nourish themselves on the leaves, but you do want to do something about the situation. My expert on failing flora, Cousin Moribunda, advises you to spray the plant now with horticultural oil, and repeat this practice each March as new leaves begin to form. Nothing you can do now will repair the damage to the current crop of leaves. However, she is confident that the bushes themselves are not in danger, which is what is most important.

She also points out that the sunny location is in fact part of the problem. Azaleas are shallow-rooted and dry out quickly if not planted in partial shade. Full sun dries them out, weakens them, and makes insect proliferation more likely.

Moribunda tells me that you should water your azalea plants daily when it does not rain and wash the leaves periodically. The lace bugs lay eggs four times a year, and a black tarry substance under the leaves will betray their presence.  In the autumn, pick up fallen leaves and dispose of them so that the pests can’t overwinter.

There is another solution to the lace bug problem: their natural predator.  Ranger Mark of the Maryland-National Capital Park and Planning Commission,  who is an expert conservation biologist, believes the best thing you can do is to introduce the native insect species often confused with the lace bugs, the lace wings. Both the common lace wing, Chrysoperla rufilabris, and the Eastern lace wing, Chrysoperla ornata, feed on the larvae of the lace bug. They will be attracted to your garden if you grow any of our common wild flowers: chicory, Queen Anne’s lace, black-eyed Susans, and even those dandelions you may have been trying to root out of your lawn. More formal flowers, such as asters and roses, will attract them as well.

Like the beautiful but terrible Japanese beetle, the lace bug is an exotic insect introduced early in the 20th century from the Far East. It is fortunate that we have the native lace wing, which resembles it so closely, to keep it in check.

To learn more, please join Ranger Mark on Saturday, April  20, for a tour of Magruder Park in which he will point out native and non-native plant and insect species and explain their characteristics. The Hyattsville Horticultural Society will be meeting him at the Hamilton Street parking lot at 10 a.m.

As a result of this tour, the HHS semi-annual plant exchange is postponed till Saturday April 27, after a brief meeting  at the home of Joe Buriel and Dave Roeder, 3909 Longfellow  Street at 10 a.m.  If you have too much of certain plants, dig them up and come exchange them for plants you’d like to try out. You will also be able to exchange information with other area gardeners.