County to kids: Wait to skate 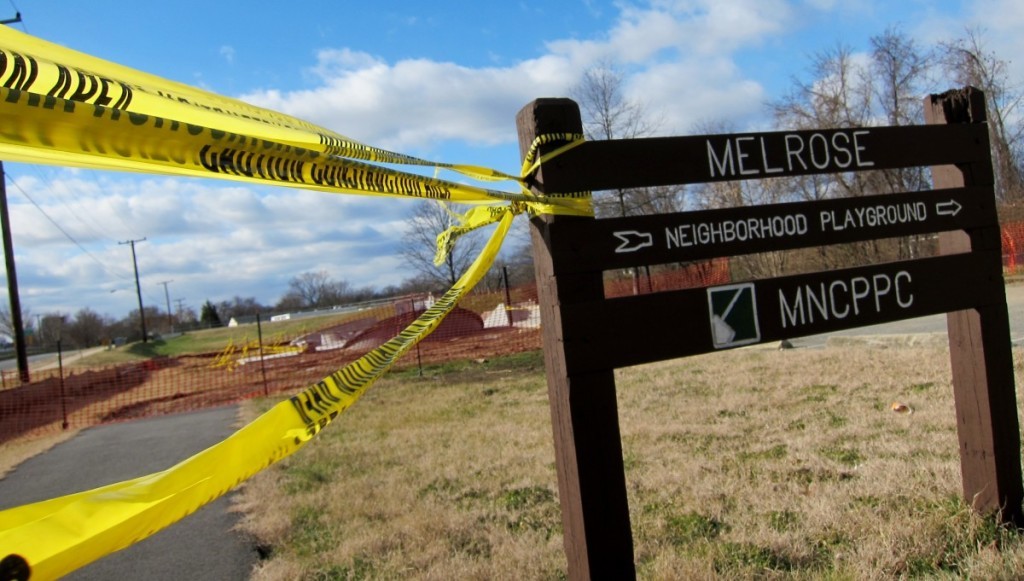 BY SUSIE CURRIE — Note to Maryland-National Capital Park and Planning Commission: If you build it, they will come.

Nine years after a St. Jerome middle-schooler started a petition, the American Ramp Company finished installing Melrose Skate Park in early December. It marked the end of the first stage of a larger renovation of a 3.4-acre park on the Northwest Branch Trail, near the city’s southern border.

Then construction ceased, due to falling temperatures that closed the asphalt companies. When they reopen, contractors can start installing the basketball half-court, the expanded parking area and the realigned trail. It should be done by late March, said M-NCPPC landscape architect supervisor Brenda Iraola.

In the meantime, skaters of all ages have been flocking to the park. So many, said Iraola, that a concrete bench broke before it had finished curing and had to be replaced.

“We’re glad that so many people are excited about it,” she said, “But for love of the skate park, people have already ruined part of it.”

Iraola, who also oversaw construction of the Mount Rainier Skate Park in 2009, says that the amount of premature park use has been a surprise.

“We didn’t know people would be using it before we were ready to open,” she said. Some kids jumped the gun on the Mount Rainier opening, too, “but because it’s kind of tucked away, they didn’t start coming until the very end. Being on Rhode Island Avenue, Melrose is so visible – it’s gotten a lot more use much earlier in the process.”

The main concern, she said, is safety. Since the rest of the park isn’t finished, the whole area is considered an active construction site and, as such, could be hazardous.

“A skater who fell into those empty planters would be falling three or four feet into hollow concrete,” she explained. “Also, there’s still construction debris – nails, pieces of rebar – around the perimeter. So even getting to the site, anyone who fell while walking through the mud or gravel could get hurt.”

And so, on December 23, M-NCPPC employees came to seal off Melrose Skate Park. That came as a surprise to several children; 4-year-old Gloria Bowman had been hoping to practice in-line skating when county workers began surrounding the area with yellow caution tape and orange snow fencing.

Later that week, other children, who intended to spend part of their school vacation perfecting skateboard tricks, were instead told by county officials that the Park Police would soon be doing spot checks to remind people of the closure. A temporary chain-link fence with a No Trespassing sign will be installed by mid-January.

“It’s silly for the county to invite kids to jump off 5-foot concrete ramps, but worry they will walk through the muddy edge of a vacant site or fall into a flower planter,” said Matt Bowman, Gloria’s father. “Kids from around the county will climb any fence they erect.”

While construction is halted, he said, the county could “clean up [debris] on a small path leading to the skate park, cover the empty planter with a piece of plywood, and just fence the side of the park that would prevent the ‘hazard’ of a kid walking into construction mud.”

Iraola understands the frustration. She said she tried to get a temporary opening of the skate portion until construction resumes on the rest of the park, which she expects to be mid-February.

“But the risk-management team here thought … it would be sending mixed signals to open it, then close it,” she explained. “And we really do have to have it closed while the rest of the work is getting done, when there will be big machines everywhere.”

City Councilmember Eric Wingard (Ward 1) represents the district containing the park. “Considering there will be nothing added to the park for safety, I personally do not see why it cannot be used at one’s own risk, as it will be once officially open,” said Wingard, one of several parents who recently bought their children skateboards. “That being said, the park is really a fantastic addition to the neighborhood.”

“It’s not that we don’t want people to use it!” said Iraola. “We’re excited that people are coming, but we want to keep it safe. When we’re done with everything and the Bobcats and tools are gone, we want them to come back and skate their hearts out.”

In Memoriam: An emotional farewell to Hyattsville Elementary teacher