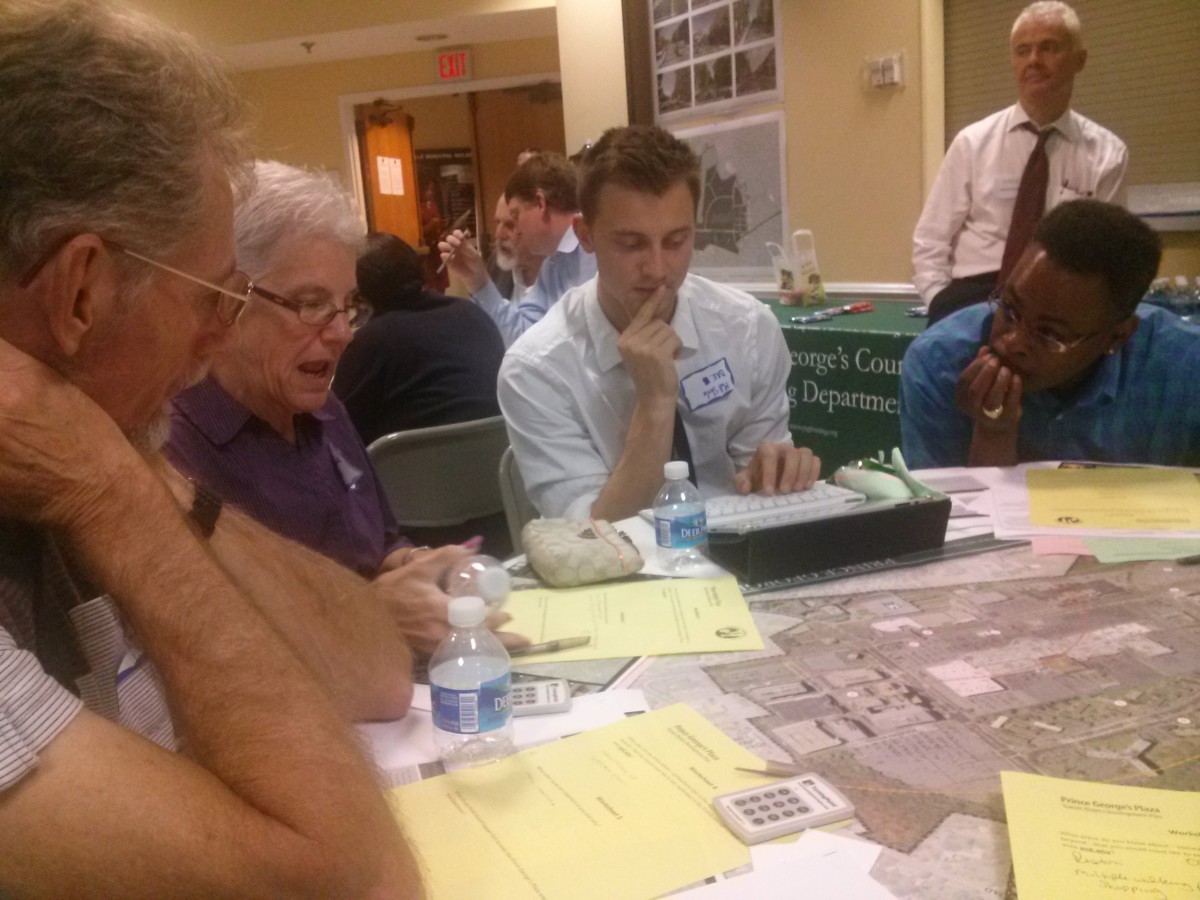 BY ANDREW MARDER AND REBECCA BENNETT — On September 17, over sixty people met at the Hyattsville Municipal Building to kick-off a three-day design charrette to discuss updating the transit district development plan (TDDP) for the area around the Prince George’s Plaza Metro Station. The meetings, run by the County planning department, were designed to give community members a chance to make suggestions for the future of the area around the Mall at Prince George’s.

That area, bounded by Northwestern High School on the north, the Hyattsville Library on the east, Nicholas Orem on the south, and West Park Drive on the west, has been designated as a future downtown site in the Plan Prince George’s 2035 program.

Residents, City council members, and business stakeholders were asked to suggest ways in which they thought the area could be improved. Questions ranged from how to increase safety to ways in which green space could be incorporated.

Participants were also polled on their current use of the area. Questions included how often they shopped in the mall, how they traveled to the metro, and whether they felt safe when in the area.

After the charrette kick-off meeting and a drop-in suggestion day, the planning department presented potential plan alternatives on September 20th.

“We think it’s really important the area begins to change in the near term,” Cheryl O’Neill, one of the consultants working on the plan update, said as she presented the proposed concept.

The planning department said County priorities included adding a second Metro entrance on the opposite side of the platform that would lead into green space between the Metro and the Mall at Prince George’s. The updated concept plan also includes tree-lined pathways, green courtyards, and green roofs throughout the parking lot of the Mall to address current storm water management issues.

O’Neill said these changes “set forth a pattern of development that makes sense.” From there, planners hope to see development on the Mall site, including a medium-scale residential building mimicking the Post Park and Mosaic apartments with retail space in the bottom.

Planners believe these initial changes will help transform the area around the Prince George’s Plaza Metro Station into a viable “downtown.”

The 30-year concept plan went even further to include a fully-developed Mall site and tree-lined pathways all through the transit district. They envision the Mall’s existing covered walkways being an important part of connecting foot traffic around the Mall.

A pedestrian street between the Mall and the adjacent University Town Center (UTC) is in the plan, as are connective paths to northern isolated areas of the transit district.

Planners indicated they would like to see the community center moved to the southwest parking lot of UTC, closer to the Metro. The planning department additionally sees some kind of public recreational or entertainment center taking root north of the Mall, as well as rain gardens and a bioretention facility to address storm water management in the area.

Additionally, Ricks suggested three new stop lights in front of the Mall, including the light at Editor’s Park, near the pedestrian bridge, and in front of University Town Center could operate without decreasing overall time it takes cars to travel through the area..

The planning department will present a refined plan to the public on October 14 at 6:30 p.m. at the Prince George’s Plaza Community Center.