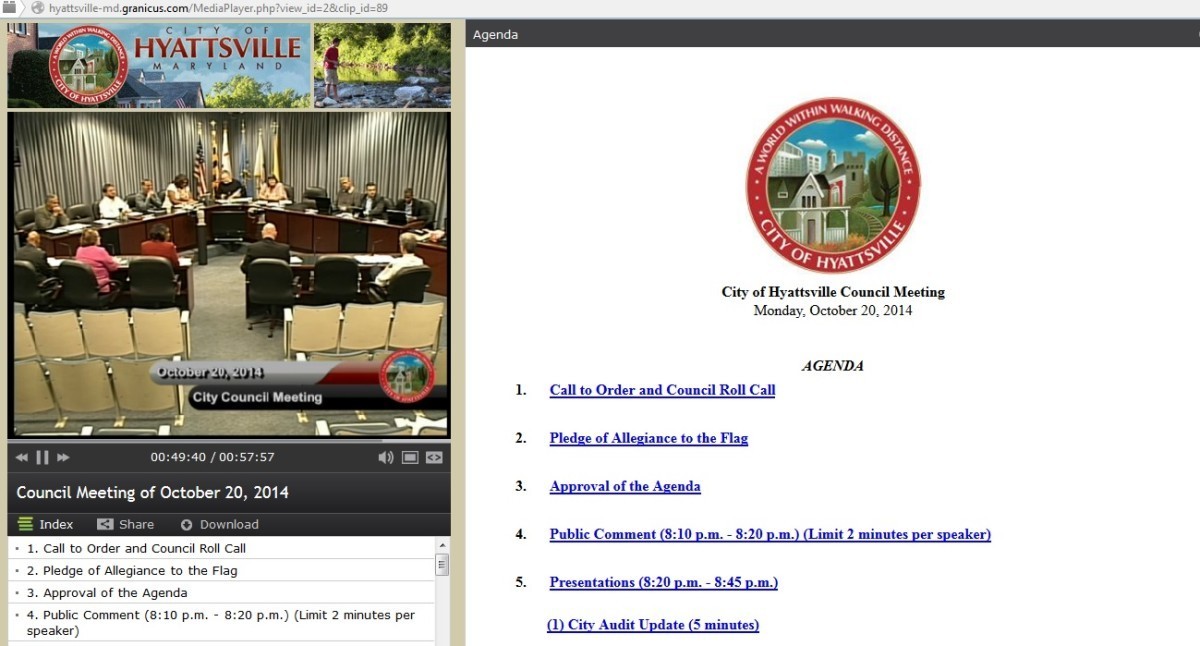 BY GRANT WHITTINGTON — On October 20, Hyattsville councilmembers voted to switch software which is used to stream council meetings online from Granicus to Carahsoft. Along with the online streaming feature, Carahsoft offers agenda and meetings management services.

Hyattsville City Clerk Laura Reams advocating for the switch that will become effective as soon as January 2015.

“We were looking for compatibility with existing systems, capabilities and both internal and end user (council and the public) functionality,” Reams said. “The evaluation team felt that Carahsoft was the best fit and value for the City’s needs.”

Reams said that the City was pleased with Granicus but issued a Request for Proposal (RFP) to shop for other systems that could make the online services more accessible for both the public and the Council. There were six respondents to the RFP, who then performed presentations in front of select council members and staff. City Administrator Tracy Nicholson said Carahsoft was the vendor that offered the City the best deal.

“We think the system is very good and it meets our goals listed here. We’re pretty happy with what this package will offer us,” Nicholson said.

Councilmember Patrick Paschall said Carahsoft offered a similar value than that of the other vendors, but it’s accessibility for the end user made choosing Carahsoft a no-brainer.

“I think the primary factor that makes it different from the other vendors are the ease of use for staff, ability to track for staff and cost savings,” Paschall said.

Along with the “ease of use” as Paschall mentioned, the change in systems saves the City money. The switch to Carahsoft saves the City an estimated $5,000 annually, as the Council and staff were able to bundle the video streaming with the agenda and meetings management services, Reams said.

“Not only because it’s less than what we budgeted and less expensive than other options but also the live media streaming is significantly cheaper than the vendor we currently use,” Paschall said in the Council meeting.

“I think that the search feature will be a great enhancement for the City’s website and we are excited about the enhanced transparency this will offer to the public,” Reams said. “It will be a one stop shop.”

Along with the enhanced public access to databases, Carahsoft allows the City to expand it’s features in upcoming months. Reams and the staff anticipate that by mid-2015, the staff will implement live voting results from Council meetings. The vendor also allows residents to register to speak at a meeting online as well as provide comments to specific agenda issues concerning them.

PHOTOS: Shakespeare in the Park