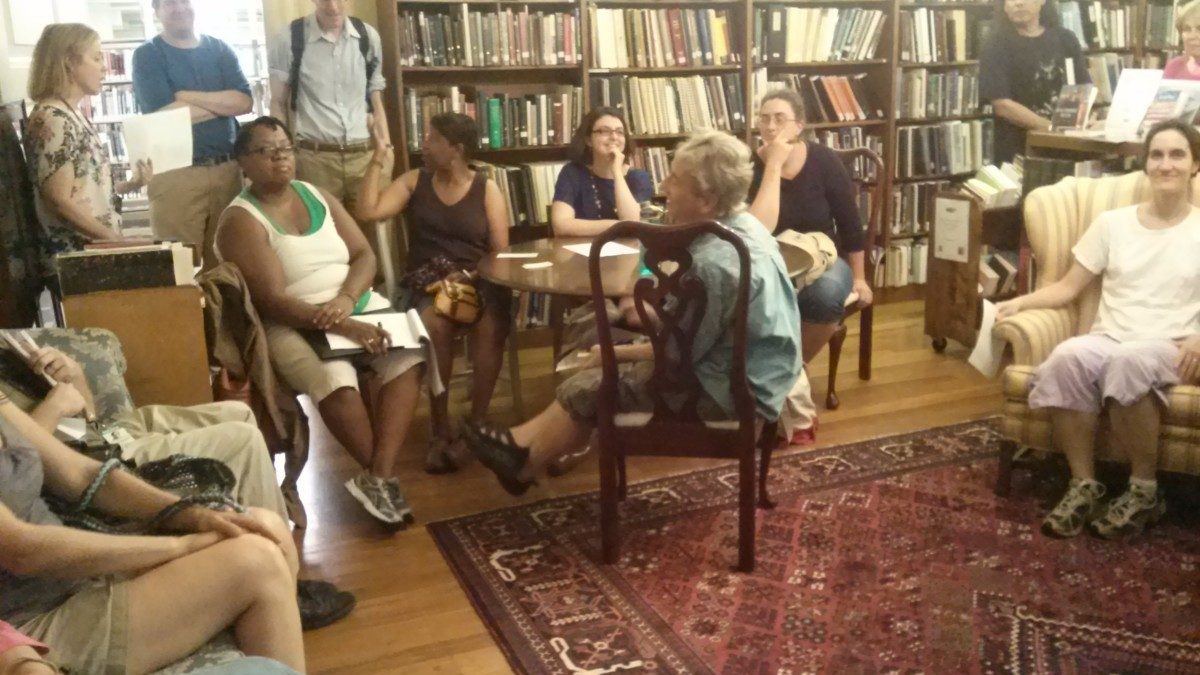 What could have been the last meeting of the Friends of the Hyattsville Branch, PGCMLSs, had standing room only. Photo courtesy Rebecca Bennett.
Hyattsville

When word got out last week about the rocky state of the Friends of the Hyattsville Branch in the Prince George’s County Memorial Library System, community members were told that Wednesday’s meeting could be the group’s last.

But not even the group’s officers were prepared for a standing-room-only meeting when nearly 20 people showed up to support the group in one way or another.

President Peter O’Day commented he had never seen this many people before at a Friends of the Hyattsville Branch meeting.  Treasurer Alan Mattladge, a librarian at the University of Maryland, replied he had seen this kind of turnout maybe once.

Mattladge and O’Day told attendees that the Friends of the Hyattsville Branch reorganized three years ago and had been working well for a couple of years.  They said about a year ago, attendance started to taper off.  The Saturday morning time slot didn’t seem to be working for most folks anymore.

For the past few months, the group had difficulty getting a three-member quorum to conduct business, which meant they couldn’t write checks to cover funding requests from the library.

The Friends of the Hyattsville Branch also preloads a gift card so the library can buy day-to-day items without waiting for the next monthly meeting.  According to Hollerbach, the gift card had $3.09 on Wednesday.  This out of the $250 that had been on the card the last time funds were added.

O’Day commented that because people showed up to Wednesday’s meeting, the Friends of the Hyattsville Branch could sign new checks for upcoming expenses.

The financial state of things

According to the treasurer, the group currently has around $12,000 set aside in the bank for the library.   The officers commented that a chunk of this money was left over more than three years go from the previous iteration of the friends group.

The group has been having difficulty keeping up with the bookstore.  O’Day said the library staff had been collecting money from patrons buying used books, but the county decided the staff could not do that anymore.  Hollerbach said this was because of tax implications.  O’Day says they struggled to get a donation box up.  For a period, they could only keep the library open when a volunteer showed up one day a week.

Mattladge says the Friends of the Hyattsville Branch used to collect between $300 and $400 per month when staff collected the funds.  He speculated that they have not seen a significant drop in donations now that the honor system is in place.

Group officers say the current difficultly with the bookstore is collecting the money from the donation box and getting it to the treasurer to be donated.  They need someone to do that on a regular basis.

What does Friends of the Hyattsville Library do?

According to current members, the Friends of the Hyattsville Branch is:

If the group disbands, Mattladge said they are not sure what would happen to the books from the store.  He commented that they may leave the community.   Hollerbach said a conversation with the county director indicated they most likely would go to the New Carrollton bookstore.

Mattladge and Hollerbach both speculated that the annual book sale at the Hyattsville branch would most likely go away if the friends group doesn’t organize it.

In a statement from PGCMLS director Kathleen Teaze:

Each Friends group may place emphasis on different things.  One of the significant contributions of Friends of the Library in Prince George’s County has been to financially support special events and programs that the library holds.  The money to pay for guest speakers and entertainers for our children’s Summer Reading Program (Summer@Your Library) has most often been donated by Friends groups.  They often contribute to purchase special items that fall outside the Library’s budget limitations, such as special shelving, extra computer equipment.

Because Friends groups are separate organizations, the Library System does not budget their contributions and doesn’t rely on them to provide any basic services.  Instead, we appreciate the enhancements to our programs that the Friends of Libraries provide.

Looking to the future

When the group voted to approve library requests for funding, it was met with laughs and giggles of excitement.  Requests for funding presented by Hollerbach incuded a film program, snacks for the teen advisory board, and supplies for a science program.

“That’s the biggest thing we do,” group president O’Day said.

Treasurer Mattladge said, “We could do bigger things that that.”

The president, treasurer, and area manager tossed out ideas that the group could do in the future:

Area manager Hollerbach added that at one branch, friends bought $50 in $1 ice cream cones for the kids when an ice cream truck showed up on a hot day.  She said the friends could staff the bookstore with volunteers the whole time the library was open.  Hollerbach also said the friends group could sell ear buds, flash drives, and other useful items to library patrons.

But the future is still unsure for the Friends of the Hyattsville Branch.  The turnout made current officers feel confident enough to schedule officer elections in August, something they tried to do in April.

Both O’Day and Mattladge are ready to step down.

That means, the group is looking for volunteers to serve as president, secretary, and treasurer.  The group vice president was unable to attend Wednesday’s meeting.

Elections of those officer positions will be held at the group’s next meeting, which is August 20 at 7:00pm at the Hyattsville Library.

Anyone who donates to the group or attends a meeting is considered a member.  Anyone who wishes to run for office can just show up at the meeting.

You can connect with the group online at https://groups.yahoo.com/group/hyattsville_library_friends