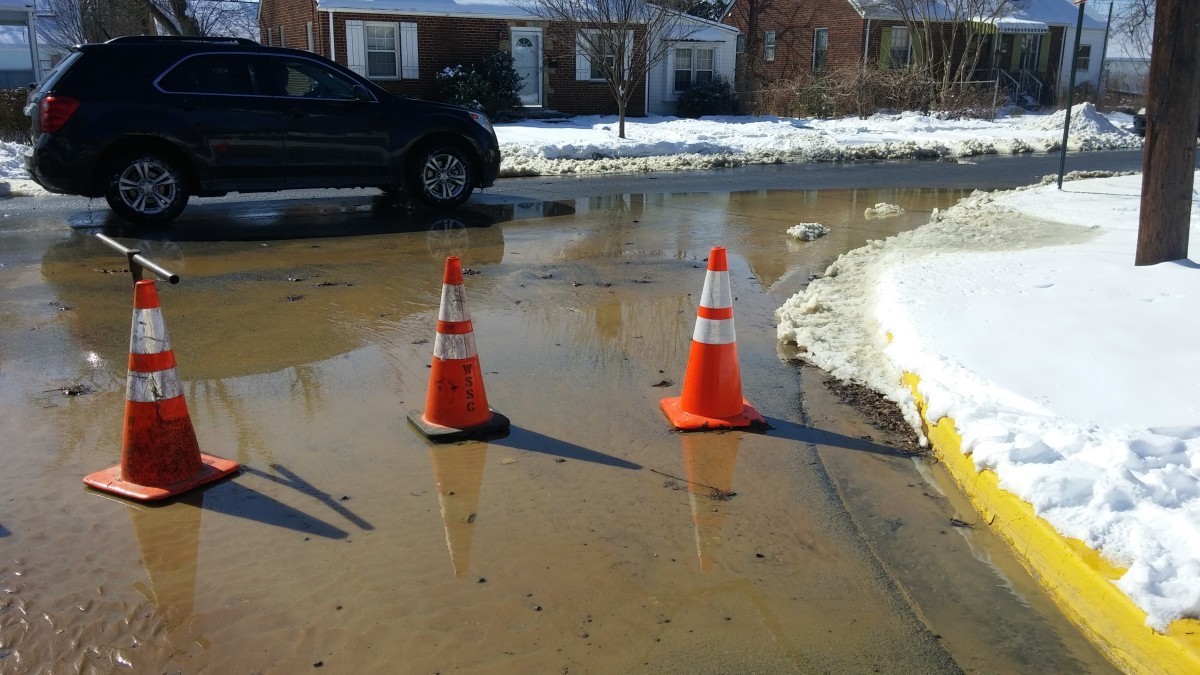 As flooding becomes a more persistent local and regional problem, particularly for downstream areas like College Park’s Calvert Hills, residents are paying the price for an outdated system that can’t accommodate more frequent and severe storms. Much of the city’s stormwater management infrastructure predates current county and state requirements.

Many residents are vocal about the impacts of flooding, and especially about the resulting sewage backflows. As previously reported by College Park Here & Now, local utility company WSSC Water has been engaging with the city for months on how to best address backflow issues. At a March 29 meeting, WSSC representatives said that they’re looking into a range of short-term solutions, including backwater valve installations for select homes, as they search for a long-term solution.

The most recent severe flooding in the city occurred on September 10, when about 4.5 inches of rain fell over two and a half hours. According to data from the National Oceanic and Atmospheric Administration, about 4.9 inches of rain over a 24-hour period is considered a 10-year storm. The same amount falling in two and a half hours is considered a 100- or 200-year storm.

State and county guidelines stipulate that a stormwater management system should be able to accommodate precipitation from a 10-year storm.

A project to retroactively increase the city system’s capacity is still in the planning stages. Shovels may be in the ground this summer.

Representatives from the county, the Maryland Department of the Environment (MDE) and engineering consultants from RK&K Civil Engineering held a public meeting on October 21 to provide an update on the Calvert Hills Drainage Improvement project.

“We have to understand and appreciate the fact that the majority of the storm rain infrastructure built within that area of the county predated current design standards, and it is undersize, as is most of the case with the inner beltway communities,” MDE Division Associate Director Jeff DeHan said at the meeting. “The majority of all of the storm drain infrastructure in that area of the county was designed and implemented probably over 40 to 45 years ago, and it was designed to address and meet capacities at that time. Impervious areas have increased over the years, which increased the amount of runoff.”

“There’s a significant amount of development happening upstream of the Calvert Hills and Old Town communities. And I think a lot of it is excellent in terms of improving stormwater management,” Calvert structural engineer and certified floodplain manager Stuart Adams said. Adams is also secretary of the Calvert Hills Civic Association. “A lot of that definitely improved the stormwater management that’s currently there, but I’m an advocate that we can’t just go with what the minimum requirements of the county are – we even have to go above, even though Prince George’s County is pretty good about our standards that are required. There’s still opportunity to improve.”

The Calvert Hills Drainage Improvement project is based on a study of the College Park system that was conducted more than a decade ago.

“That same thing that happened in September could happen again,” Adams said. “We just need to continuously improve stormwater management, across the board, because the current standards and the projects that are in place are based on years and years of older data, and, as we’re seeing, there’s a much more intense rainfall that seems to be occurring in the area.”

The current plan will update the system to existing standards and does not factor in the prospect of more frequent and intense storms.

Some city residents and local officials maintain that efforts to get the city’s system up to current standards aren’t sufficient to handle an increasing problem, especially as local development — which can significantly impact stormwater management efforts — continues. Having multiple jurisdictions involved in development approvals creates an additional layer of complications.

“Our real concern is that development is going to put us in a situation like Ellicott City, where they’re going to be like, ‘Oh, well, yeah, we tried.’” College Park resident Aaron Springer said. “Accountability is a very difficult thing for everybody here, because there’s so many bureaucratic layers where everybody can sort of pass the buck”

Guilford Run, a creek flowing into the Anacostia River watershed, is of particular concern.

According to the MDE Office of Communications, state and federal projects in Maryland are reviewed by the department’s Sediment and Stormwater Plan Review Division. The office noted, however, that sometimes private entities or local governments may be responsible for regulating developments on state lands.

“Approval authority depends on the developer, not the property owner, and therefore these projects would be reviewed by the local jurisdiction, such as Prince George’s County,” MDE Office of Communications Deputy Director Jay Apperson wrote in an email. “Such an example would be one of the privately developed hotels on the UMD campus.”

The university is currently in the process of selling land in the Guilford Woods area to a private company, Gilbane Development, for a project known as Western Gateway.

In a statement provided to the College Park Here & Now, the university’s Office of Strategic Communication said that the 300-unit apartment complex, a “transit-oriented development project,” will expand housing options for graduate students.

The Western Gateway proposal has not yet been submitted for review to the Prince George’s County Planning Board. The proposal will be subject to public hearings during which residents can express their views on the project.

Many residents have already spoken out against the sale to Gilbane Development. There is even an online petition circulating called Save Guilford Woods.

The petition argues that “The proposed project is starkly inconsistent with fundamental principles of sustainable and responsible development and fiscal responsibility. This is not smart growth.”

“The neighborhood has spoken for well over ten years. We’ve requested that [the University of Maryland] sequester more of their runoff. They’ve done some, but they’ve not done enough,” Springer said.

According to the university, the project’s current design will leave approximately 31 of the 40 acres of forested land along the stream as a buffer between Guilford Run, the stream coursing through Guilford Woods, and the surrounding neighborhood.

“We have engaged the campus and local community, hearing support for the project as well as some concerns, including those around stormwater management and trees,” the UMD Office of Strategic Communication wrote in their statement. “Effective stormwater management is a key component of this project. Gilbane has addressed these issues in the current design, and we look forward to continued conversations with the community on the project.”

With several agencies regulating the issue in the city, stormwater management will be an ongoing and complex problem. Residents are encouraged to continue to voice their concerns as opportunities to engage with developers and regulating officials arise.

Community on the Move: University Community Vision, past and present

NEW DETAILS: College Park will be home to Franklin’s Grill and Oyster Bar