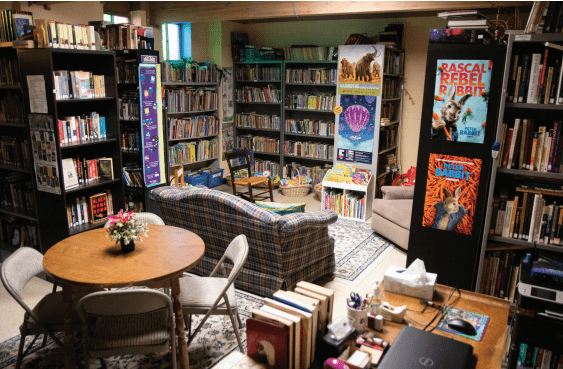 The new year is here, and the College Park Community Library is eager to reopen and even launch a new program.

The library, which is located in the basement of the College Park Church of the Nazarene, has been closed since Gov. Hogan issued the state’s shutdown order last March.

Before the pandemic, the volunteer-run library offered a wide range of free programs to the community — book, photography and arts groups, storytime sessions, English as a Second Language classes, a junior reader program — and more.

The library was planning to hold its eighth annual book festival last March, with some 43 authors on tap to participate.

“To call everybody and say to them, ‘Hey, we have to put this on hold maybe until October [of 2020] or later,’ was so devastating, yet they were all understanding,” said Jackie Kelly, library co-founder and director.

Kelly noted that the library will reopen only when it is safe to do so. The library’s space is small —  roughly 17 by 23 feet — with a desk and a table, a sofa, some chairs, and, of course, books.

“I cannot see having maybe 12 kids and their parents in there for storytime, and there’s no room to social distance,” she said.

One of the library’s book groups continued to meet monthly in the church parking lot well into the fall, and more recently has been meeting virtually.

“Once the weather got cold and the days got short, it was difficult to do it at 7 p.m. outside,” said member Jessica Elk. “It’s unfortunate, because it was nice to be able to go somewhere and see people. That made a huge difference.”

The pandemic has impacted some members’ participation, though.

“It’s just been exponentially harder … we have more people who are regulars, but they’ve kind of dropped out with the pandemic,” book club member Carol Munn said.

The club has a core group of about seven people and a mailing list of some 20 more. Member Debbie Dugan said that people tend to participate sporadically or if a book interests them.

“Once we’re in a different place [with the pandemic], I think we’ll definitely be looking to get together in-person again,” Elk said.

Although the library’s reopening date is uncertain, Kelly is looking forward to implementing a new programming idea that a volunteer suggested.

Andy Guan, a recent University of Maryland graduate, wants to launch a program for low-income families to teach them how to build, maintain and use computers. Guan believes that such a program will empower participants and likely increase their access to computers.

Guan said the inspiration for this project stems from his childhood experiences.

“I used to rely on my public library all the time for computers, to be able to access computers growing up, and it’s sort of unfortunate that the College Park community doesn’t have that option,” Guan said. “I want to find a way to sort of get around that and bring more computers to people’s homes.”

Guan has been building computers since he was about 12 years old, mainly, he said, to figure out “cheap ways to create a powerful machine to play games on.”

“I guess my own desire to play games has really helped me to develop a skill that can help others,” Guan said.

Kelly recently approved Guan’s suggestion and will provide him with $500 in funding to launch the program.

“I talked to the leadership staff at the library, and we decided that we have some money set aside from a grant that we can offer him. I don’t want him to take any money out of his pocket, because that’s not what volunteers need to do,” Kelly said.

Guan is exploring next steps, but he also had an eye to how the pandemic may affect his options.

“We still have a pandemic going on, and it’s not clear how many people may be comfortable coming back to the library, but I have a very strong idea of what I’m going to do for the program,” he said.

Kelly said she is excited about Guan’s idea and admires his ambition.

“He has goals in mind, and he’s going to meet those goals,” she said.

In the meantime, Kelly is seeking additional volunteers for when the library reopens.

“We’re trying to do everything within the community that we can to make our community viable right now, and we can’t wait for our doors to open again, and have people come in and take part in our activities,” Kelly said.

Hyattsville Life and Times, 10 years ago 1 min read
Beyond Hyattsville