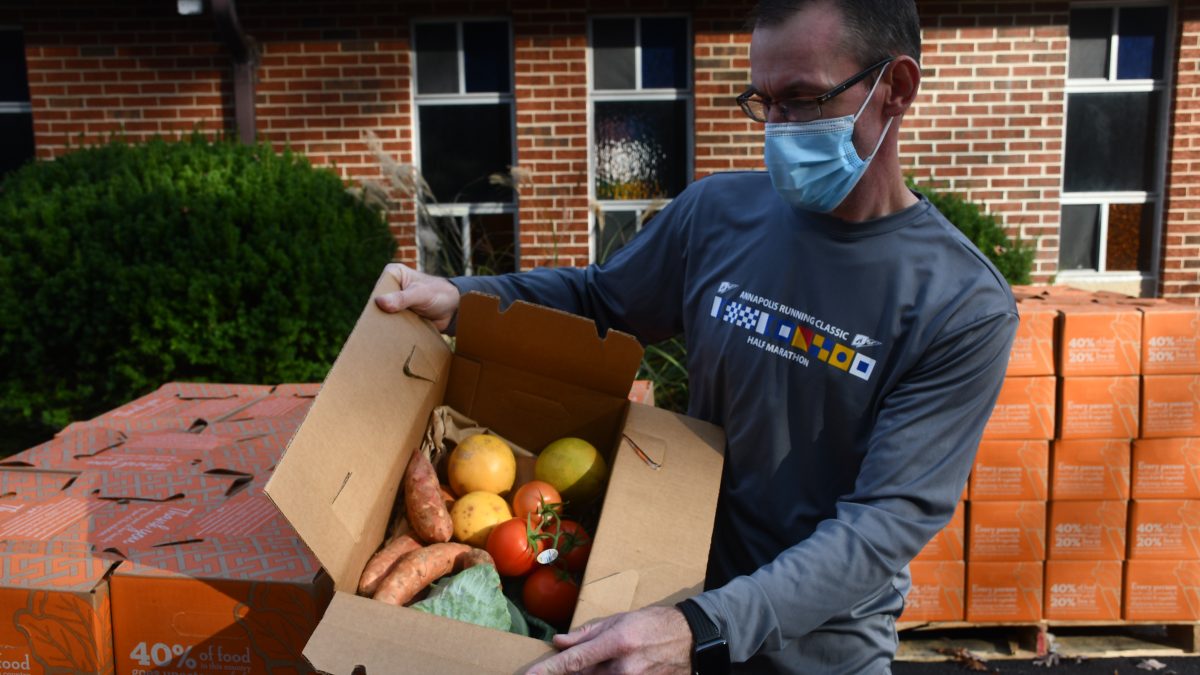 Franklin “Frank” Yates, who lives in Wheaton, stood in frigid weather for more than half an hour on Nov. 14, waiting for fresh produce outside the College Park Community Food Bank (CPCFB), located at the Church of Nazarene, 9704 Rhode Island Avenue.

Yates, a 72-year-old retired Navy Reserve veteran, traveled more than nine miles by bus to the food bank. Like many, he experiences food insecurity, which has become even more of a challenge for him during the pandemic.

It usually takes about an hour and a half one way for Frank to get to the Greenbelt Station, where he gets off and then walks almost a mile to the church, but Yates excitedly explained that his trip took only 45 minutes.

The food bank has been operating for 12 years, serving College Park and its neighboring communities. As food insecurity has increased because of COVID-19, the nonprofit has moved from monthly to weekly distributions, serving more than 1,000 people every month.

But need in the community fluctuates, and has been trending up through the fall. In October, the food bank served about 4,000 individuals, and continued to provide 10-pound boxes filled with seasonal foods. But it is hard-pressed to keep up with demand.

“As soon as those boxes are gone, that’s all we can do,” said Mark Garrett, senior pastor at the Church of the Nazarene.

Garrett noted that the food bank pays more than $3,000 to order the boxes from Hungry Harvest, a local company that sources produce from farms and wholesalers, and repackages food for delivery.

“We have never had a shortage of volunteers, and to be honest, we very rarely had a shortage of finances. As the need has increased, so has the financial giving for the College Park Community Food Bank,” Garrett explained.

Evan Lutz, Hungry Harvest CEO and co-founder, came up with the idea to sell leftover harvested goods while studying at the University of Maryland. Hungry Harvest, which is headquartered in Baltimore, has 65 employees scattered across nine states.

Due to the expense, CPCFB includes produce from Hungry Harvest in its distribution only twice a month.

“We’d love to do it every week, but there’s just no way,” Garrett said.

The CPCFB has also encountered complications in trying to reach its goal of distributing 300 turkeys this Thanksgiving. In the basement of the church, the food pantry designated a cooler to collect donated turkeys.

The church handed out 175 turkeys and 600 pounds worth of turkey burgers, in the days leading up to Thanksgiving.

Garrett acknowledged that they wouldn’t have enough, though, to address the need in College Park.

With food distributions scheduled every weekend now, instead of once a month, vehicles are filling the roads, which creates occa degree of strain on some residents in the surrounding neighborhoods.

Garrett mentioned that traffic managers are stationed at each of the corners to “keep the residents from getting too angry.”

“It’s enough to make anybody upset if you do that every Saturday, right? If I lived in this neighborhood, I would feel the same way,” Garrett admitted. “So we try to the best that we can to get along with our neighbors.”

The food bank has found a friendly ally in Mayor Patrick Wojahn, whom Garrett considers to be “our best supporter as far as public officials” go.

He told the Here & Now that Wojahn and David Kolesar, his husband, personally contributed several turkeys ahead of the holiday.

Earlier this year, CPCFB and Meals on Wheels each received $20,000 in assistance, as well as an additional disbursement of $12,000, each, in emergency funding from the city.

“There’s not been any additional federal relief coming in … yet,” Wojahn told the College Park Here & Now.

Without the support of a second federal relief package, CPCFB is struggling to keep up with the growing food insecurity in the area.

In September’s edition of the Here & Now, Wojahn published an editorial, in which he urged the public to support the city’s food-giving initiatives. Even now, a few months later, Wojahn said that his message of charity “obviously still stands,” especially as the winter holiday season is in full swing.

“People have been very generous over the past several months, but we need to keep that generosity up, because the situation isn’t getting easier for folks,” Wojahn noted.

The science of the city: Where do things go when we throw them away?