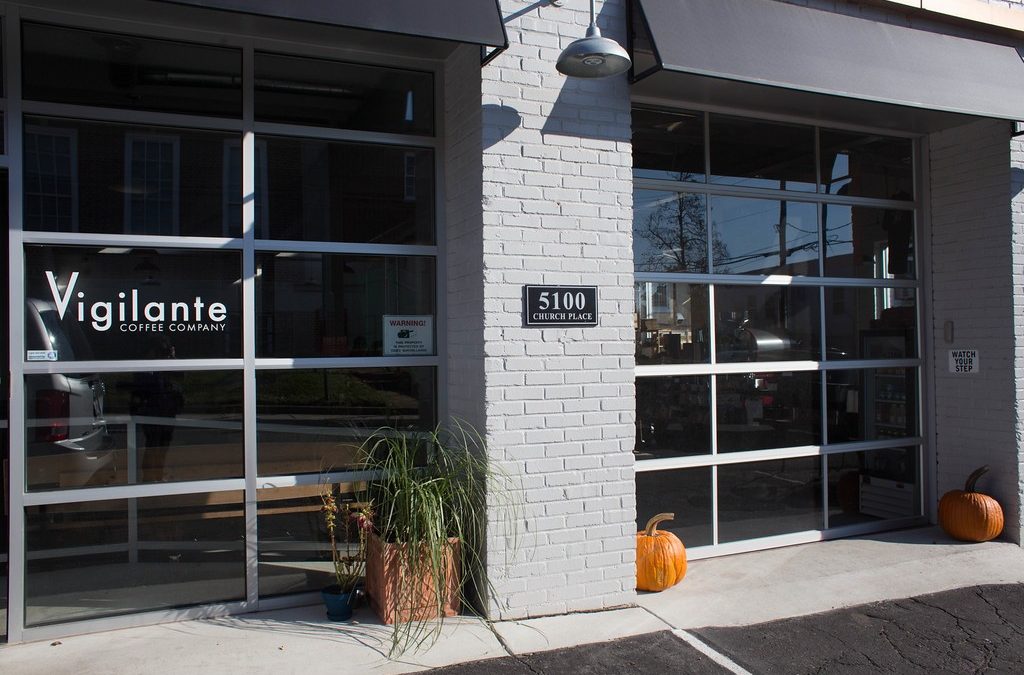 BY ANDREW MARDER — Arlington entrepreneur Daniel Simon bought the old Palmer Ford building at 4327 Gallatin Street at the end of 2012. Since then, he has been working steadily to get it ready for new businesses. It’s now home to an accountant, an interior designer, a lawyer, and Vigilante Coffee, whose grand opening is scheduled for July 19.

The building is a testament to Simon’s passion for renovation, as I discovered on a recent visit. His office, the large open space that doubles Vigilante’s roastery, is dominated by an old church organ that he clad in copper. The whole space has a feeling of history and craftsmanship, a side effect of the old Model T dealership’s nearly 100-year history. It’s that passion for breathing new life into the old that gives Simon hope for the future of downtown Hyattsville.

“There’s a lot of potential here,” he says. “It gives you an old-town feel and it’s right on the border of the District.” That, he believes, makes it a perfect spot for growth.

On his journey to refurbish the building, Simon has worked closely with the Hyattsville Community Development Corporation (CDC) as well as with the City. For instance, the city’s Commercial Façade Improvement program supported

Simon’s renovation of the building’s exterior in keeping with the site’s rich history.

Without that sort of help, Simon says, many local businesses wouldn’t be able to get off the ground.

“Businesses fail real quickly because [the owners] don’t know who to ask for help. They don’t necessarily know what they’re doing,” Simon says. “They just have this idea of starting a business and making some money. It’s not that simple.”

That’s a sentiment that the CDC echoes, and one that it’s trying to do more to address.

“We try to assist the prospective business owners to deal with a lot of elements they may not have taken into account,” CDC President Stuart Eisenberg says. “For instance, often in a business model, the business owner doesn’t [consider the cost] for paying themselves any salary.”

One of the biggest challenges for a new business can be managing the balancing act between spending money now and looking out for the long-term health of the business. Simon points out that putting in the effort up front to renovate his building means that he’s more likely to get good tenants and attract visitors. On the other hand, it wasn’t cheap.

He thinks that there can be more support for local entrepreneurs, especially at the county level. There, businesses often have to plow through weeks of inspections, stacks of paperwork and multiple levels of bureaucracy in order to open their doors. While large chains may have the manpower and experience to do it, small businesses may find it off-putting.

Simon envisions a future where the steps are easier to follow and geared toward supporting local business.  As a start, he suggests bundling services or requirements in a productive way, waiving some smaller annual fees for the first year, or just having a stronger line of communication in place.

Once all the boxes are checked, Simon can’t think of a better place to set up shop. As the area fills with more residents and businesses, it will attract even more retailers and service providers. A good mix of the two, he thinks, will allow the area to thrive even if foot traffic is slow to grow.

As an example, he points out the interior design firm housed in his building. Most of Riggio Design’s work happens outside of the office, so the company has no reliance on foot traffic. However, having a location downtown gives Riggio an easy way to meet with new and existing customers. By having a high-profile — but not too large — location, the business can grow its awareness in the area without spending a fortune. Simon sees those sorts of businesses as keys to continued growth in Hyattsville.

Already, development in the Route 1 corridor is starting to drive more foot traffic downtown. As additional restaurants and retailers move in, consumer demand should grow, bringing in even more business. It’s a virtuous cycle and it’s one that Simon, the CDC, and the city are all looking forward to.

For now, Simon is happy to have a full building, good tenants and a strong relationship with the city. Growth will come, he believes, and with a strong foundation beneath him, he’ll be ready to make the most of any opportunity. He brought back the charm of the old Model T showroom, and in doing so, has given Hyattsville one model for renovating its once-idle downtown.