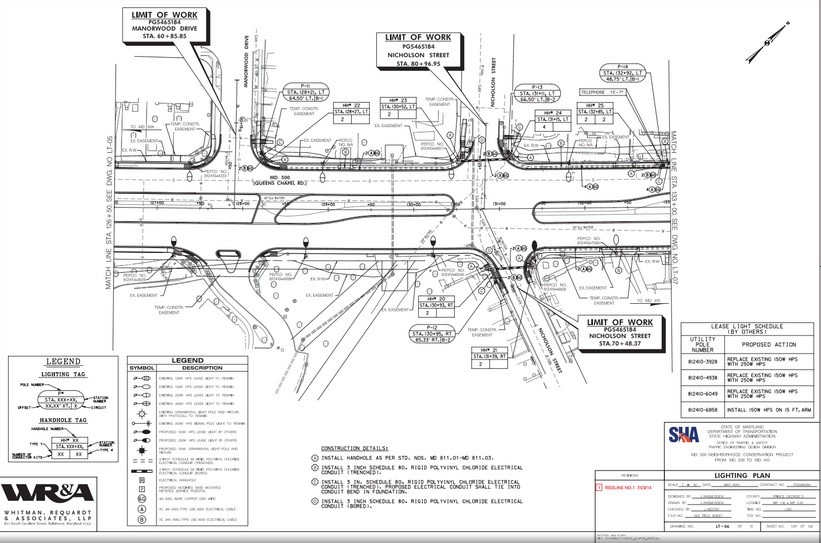 An illustration of several of the 35 proposed lights along Queens Chapel Road.
Government

BY GRANT WHITTINGTON — On October 6, The Hyattsville City Council voted to pay for increased lighting along Queens Chapel Road (MD 500), ending weeks of dialogue in the Council about sticker-shock when the City’s agreement with the Maryland State Highway Administration (MDSHA) jumped 300 percent.

The original contract the City signed with MDSHA agreed Hyattsville of was responsible for only 50% of the lighting costs.  At the time, the City’s responsibility was more than $60,000.  But, the price tag escalated to three times that amount. Since the Council voted to increase lighting on MD 500, taxpayers are responsible for paying $191,226.

The current plan estimates the construction of 35 pedestrian lights approximately 60 feet apart running from Hamilton Street to East-West Highway, according to a document provided by the Council. The State will still contribute a total of $6 million toward other infrastructure, such as upgrading medians on the busy road.

The Council came to a near unanimous vote to pay for their share of the increase lighting with the only councilmember to vote against the measure being Council Vice President Paula J. Perry (Ward 4).

Perry said she wanted to delay the voting to next meeting scheduled on October 20 so councilmembers could analyze a crime report on Queens Chapel Road. The councilmember of 15 years said she doesn’t believe the lighting in that area is bad enough for such high costs, and thinks there should be more of a focus on residential lighting in West Hyattsville instead.

Councilmember Patrick Paschall (Ward 3) agreed lights in residential areas would reduce the crime rate, but he also said he didn’t want to lose on an opportunity to improve lighting on highway streets as well.

Had councilmembers voted to not to pay the increased lighting costs, the City would have had to cover a total estimated cost of $343,000 if they proceeded with the project, because they wouldn’t have received support from MDSHA. Councilmember Edouard Haba (Ward 4) said that was the reason the board had to move on and make a decision where they stood.

“I think we need to be able to take advantage of the opportunity that we have,” Haba said. “If we do it now, we do it later, we still are going to be responsible for those costs.”

Perry wasn’t voting against the increase of lighting, she was simply voting to table the decision so they could have more research regarding crime on Queens Chapel Road. She said residents have complained to her that they can’t even see the house next to them.

Nicholson will send a letter to MDSHA notifying them that the Hyattsville Council is on board and the project will continue to develop. There is no estimation for when the project will begin construction.

Countdown to the Ward 5 Special Election

October 2022 Letters to the Editor