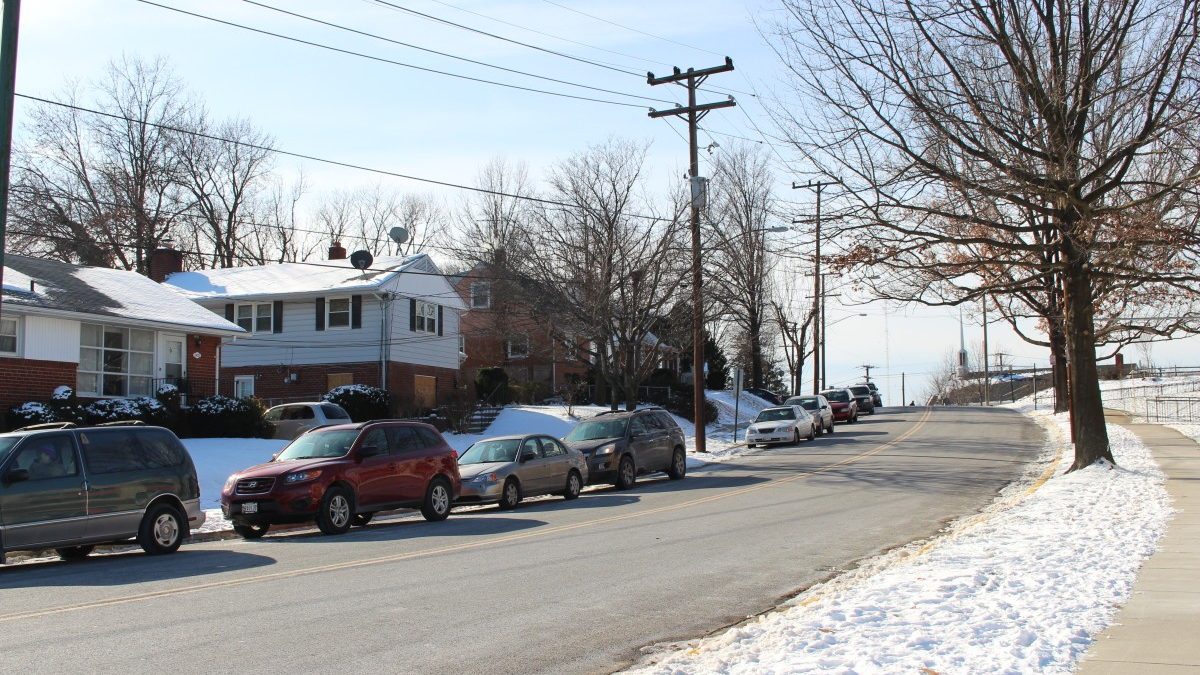 BY CAROLINE SELLE — During pick-up and drop-off times at Edward M. Felegy Elementary, school children dart across Nicholson Street while drivers — mostly parents and guardians — make u-turns at the bottom of the blind hill at the intersection of Nicholson and Mayhurst Drive.

“There’s actually a stop sign only heading west, there’s no stop sign heading east,” said Chris Giunta, the manager of code and parking compliance for the City of Hyattsville. “ … [drivers] are pulling out into wrong-way traffic.” When he visited the site in November, Giunta saw four near-accidents in a twenty-minute period.

Compounding the danger, he said, is an ice cream truck that “occupies one of the few legal parking spaces that are in the neighborhood.”

“It’s a perfect storm of chaos,” said Assistant City Administrator Jim Chandler, and it’s one that Hyattsville officials are trying to reduce. “Certainly the last thing anyone wants is a kid getting hit in an area that is supposed to be dedicated for walkers.”

Though Chandler said traffic issues are common at neighborhood elementary schools, the city has been voicing concerns since the school’s inception. When the location of the new elementary school was proposed, initial plans included vehicular access points through both Nicholson Street and East West Highway. City officials say they went to the county school system with requests for modifications.

“At the city’s request,” said Chandler, “the county modified the plans to restrict vehicular access to only access along East-West Highway.” The primary route for pedestrians was and is intended to be Nicholson Street, with the East West Highway entrance as the primary pick-up and drop-off zone.

For the first couple of school weeks, Chandler said the city had a police officer present to help direct traffic. “Unfortunately, we only have so much staff to dedicate, so we did pull back and noticed immediately we were getting cars doing pick-ups and drop-offs and some other things they weren’t supposed to be doing,” he said.

As a result, city and school officials are working to find solutions.

According to Purvis, the city administration and HCPD officials “have met with several school officials to discuss some of our concerns about the way in which parents are accessing the site during both the drop-off and pick-up.” In December, HCPD’s Community Action Team planned to conduct a safety assessment before reconvening in January to work on solutions.

Jake Rollow, the City of Hyattsville’s spokesperson, said the city is planning to widen and repaint the two crosswalks at the intersection of Mayhurst Drive and Nicholson Street. “Pedestrian crossing signs will also be installed at these crosswalks … The city is also considering placing [vertical posts] in the middle of the street, and we have requested a crossing guard from Prince George’s County Police.”

Chandler said the city has considered installing an additional crosswalk or an extended one. “Unfortunately … [with] the grade there and the layout of the roadways, it’s difficult to put another crosswalk in there in an area that’s going to make sense. When you put in a crosswalk, you’re indicating to the people walking that this is a safe area, and you don’t want to put that in an area where that may not be true,” he said.

Long term, said Chandler, a crossing guard is “the only measure that can be taken to really make sure it’s a safe situation out there.”

In the meantime, officials encourage parents to use the designated school entrance and exit off of East West Highway at Editor’s Row.

Nature Nearby: A honk and a hink for the season