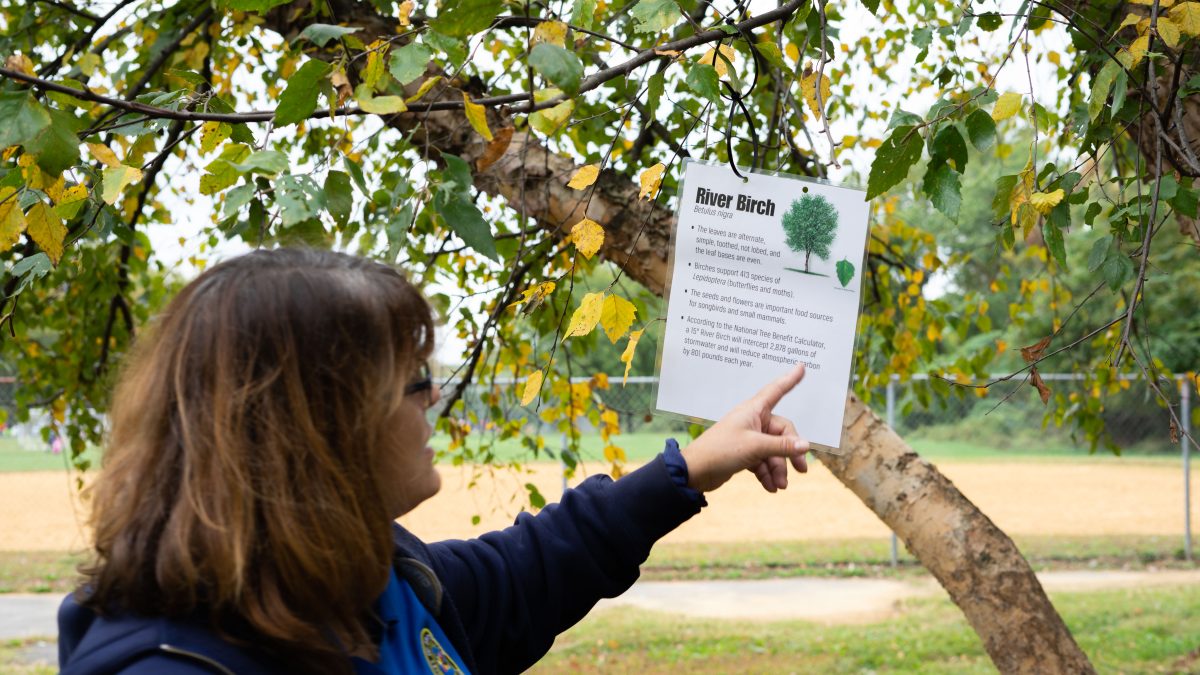 BY WINTER HAWK AND KIT SLACK

“[Forest bathing is] nature therapy, essentially, where you use your senses to connect with the environment,” said Abel Olivo, executive director of Defensores de la Cuenca. “There’s actually a physiological change that happens when we’re in nature therapy.”

The day proceeded with two tree tours, one in Spanish and one in English. Defensores de la Cuenca seeks to engage Latino and Spanish speaking communities through its activities. Given Hyattsville’s large Latino population, the organization partnered with the city to educate people of color about the need for green spaces.

Once residents have a better understanding of the importance of green space, Olivo hopes residents start to engage with elected officials and community leaders to support environmental improvements through official channels.

Another purpose of the tree tour was to educate locals on the importance of trees for stormwater reduction, according to Dawn Taft, the city’s manager of environmental services. Trees in Driskell Woods intercept thousands of gallons of water a year, in turn, protecting local rivers and streams from collecting dirty stormwater.

Aside from educating residents, the city is also planting more trees to reduce stormwater. Hyattsville received nearly $37,000 through a Stormwater Stewardship Grant in February. Since then, the city has been rolling out tree planting efforts to expand Hyattsville’s decreasing tree canopy, according to Taft.

About 150 trees are lost on private property every year from development, according to Taft. In all, between 2008 and 2018, Hyattsville lost 30% of its tree canopy, according to a report presented to the city council in October of 2020.

In fact, several large oak trees across the street from the park were cut down on the same Saturday as the city’s tree-promotion event in Driskell Park.  The trees were in the path of stormwater infrastructure work being done as part of the Suffrage Point (formerly Magruder Pointe) development.

Other large trees on that property, which is being developed by Werrlein Properties, were cut down in 2021.  A development plan approved by the county in March of 2020 mentioned four large trees to be removed on the upper lot.

County development plans do not mention some large trees removed in 2021, including some on the upper lot and others on the lower lot, close to the Driskell Park playground.

Taft continues sourcing other funding to support the city’s tree canopy and expand planting onto private property. At the city council’s meeting on Oct. 18, Hyattsville accepted funding from Prince George’s County’s Tree ReLeaf Grant, which gives the city $9,600 a year for planting trees.