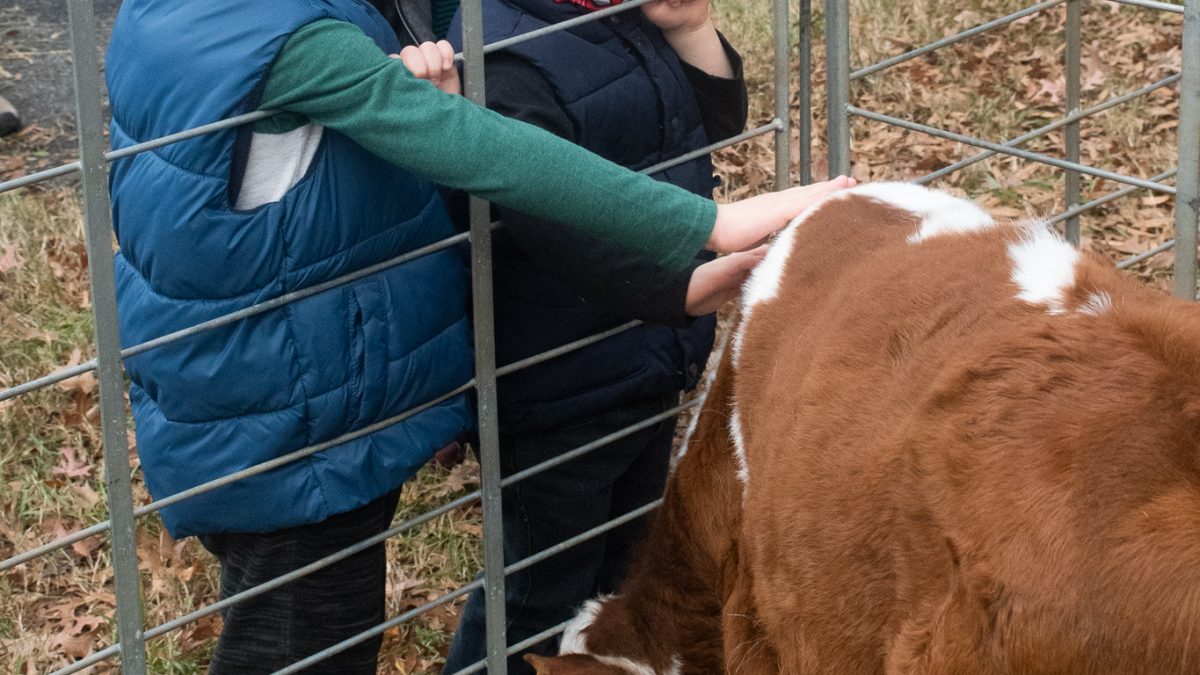 Barnyard animals and eager tots mingled on the lawn at Hope Lutheran Church on Dec. 12 as part of the church’s first petting zoo and pony ride event in celebration of the Christmas season.

Three goat kids, a black sheep and a baby cow were corralled on grass near the church’s parking lot.  Young children flocked to pens of ducks and rabbits, and Mocha, a deep brown pony with a blond mane and tail and light stockings, was at the ready to give kids rides as cars passed by on Guilford Road.

Edward Fulcher, nearly 6 years old, was brimming with glee. “The first thing I do is ride the horsies,” Edward said. “I think the pony ride was so much fun!” He had so much fun astride Mocha that he packed in four rides.

Edward and his brother Allen, who is three and a half, wore Spiderman masks to the event. Their dad, Charles Fulcher, said that the petting zoo was a neat way to broaden the church community.

“It’s so awful that routines are disrupted [by the pandemic], but the church is the community,” he said.

Fulcher put the petting zoo into context for his sons as they drove to the event. “It’s not just a fun thing,” he said.

According to Pastor Julia Bringman, a petting zoo with barnyard animals reflects the birth of Jesus Christ.

“The inns were filled, so Mary and Joseph had to sleep in a barn, and Jesus was born basically in a food trough,” she said.

“There’s a lot of images of animals around his birth. Jesus was born for the whole world, and for animals, too.”

Recognizing that the pandemic has made traditional Christmas celebrations difficult, Bringman said, “This is the year to start something new.” She noted that this was Hope Lutheran’s first Christmastime petting zoo.

Bringman said that the animals were provided by D&D Pony Rides and Petting Zoos, of Jefferson, Maryland. The company sent handlers for Mocha and the penned animals, as well.

Hope Lutheran used a $250 grant from Thrivent Action to pay for the event. The church has used Thrivent grants in the past to pay royalties for their Movies at Hope film series, too.

The public event was promoted to the congregations of Hope Lutheran and St. Andrew’s Episcopal churches. Bringman said she hopes to advertise more broadly next year.

Video monitoring back in the budget