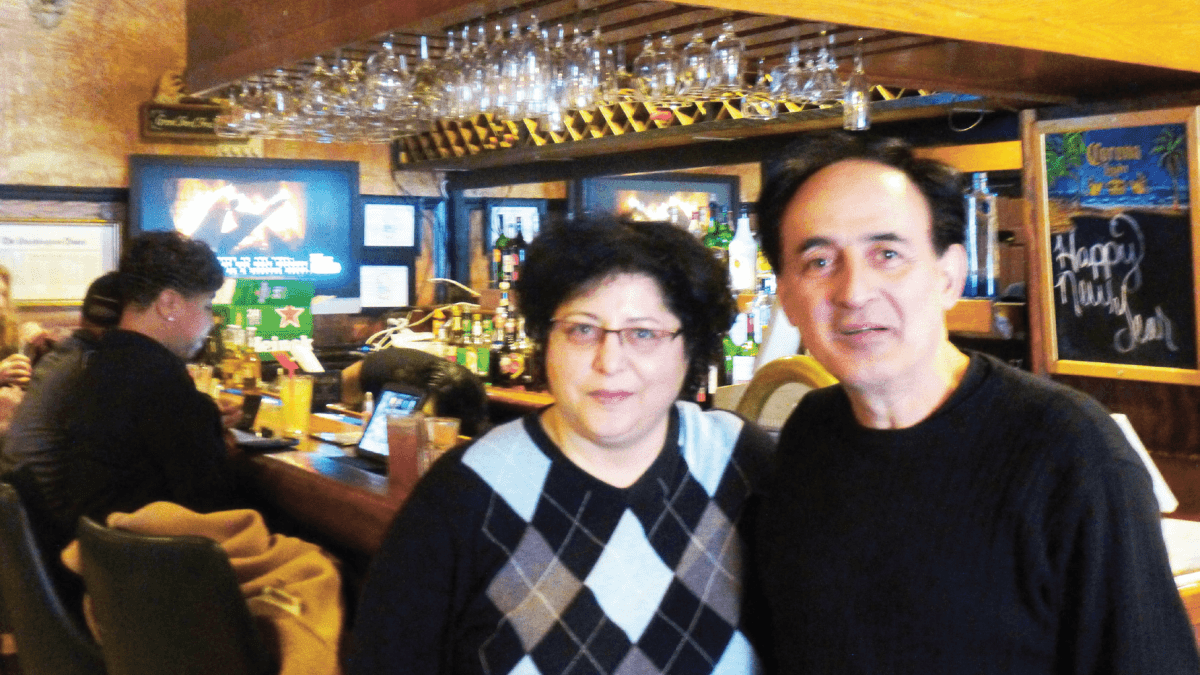 Susan and Fereydoun Salimi on the final afternoon at Calvert House Inn.
Beyond Hyattsville

BY ROSANNA LANDIS WEAVER — February 1 was much like any other day at Calvert House Inn, Restaurant and Pub. On the walls were glowing restaurant reviews from 20 years ago. Right outside the door was an oversize metal ashtray. At the tables were dishes of stuffed shrimp or Angus ribeye. And sitting on the barstools were people who’ve spent decades enjoying the company of each other and of the owners, coming back for one last crab cake.  But this was the last day of a half-century run.

And in the kitchen was Fereydoun Salimi and his wife, Susan, who operated the Baltimore Avenue restaurant for more than three decades.  Fereydoun and his brother purchased the restaurant in 1980 from George Greer, took down the large chicken out front that signified the fried chicken emphasis, and turned the focus to seafood and steaks.

The brothers originally came to the United States from their native Iran for college in the early 1970s. Their father had spent time here and “fallen in love with the country” and was determined that all his children would be educated in America.

While they were attending school, however, the Iranian revolution brought the Ayatollah Khomeini to power and so the Salimis stayed here. Fereydoun had been working at restaurants while in college and knew a little about the business, so though his degree was in mathematics, decided to try his hand at being a chef and restaurant owner.

For a long time it worked well: “On February 14, it will be 33 years,” says Fereydoun.  But instead of celebrating that Valentine’s Day anniversary, the Salimis are moving to California.

When asked why they are departing after such a long run, Susan explains, “My dear, sixteen hours of work day is a little bit stressful.”

While sheer exhaustion is a component of the explanation,  it was the brutal financial realities of the restaurant business during the recession that created the timing for the departure.

At one point, the family had owned the three connected properties between Lynn Animal Hospital and the dental offices on the corner that made up the restaurant.  In 2006, Fereydoun bought out his brother’s half of the business and made several improvements.

Hard times and increased competition made it more and more difficult to make the payments on the debts he had taken out. Susan notes that during the recession, “We lost so much and worked harder than ever.”

Eventually they went so far into debt that they lost the properties to foreclosure and it was purchased by Diversified Lending LLC, in 2012. Michael Amann, an executive at Diversified, says the hope at the time was that the Salimis would be able to continue to operate the restaurant.  He granted the Salimis a one-year lease for two of the properties (the third has been remodeled and just opened as Ivy Salon) and then a month-to-month lease.

Though it has been some months since the restauranteurs were able to pay him rent, Amann has nothing but the highest regard for them. “You couldn’t have asked for someone who worked harder.”

Yet the hard work was not enough to maintain the restaurant in the fact of a difficult economy and changing tastes.

As it became clear that it was time for the family to move on they searched for a buyer to take over the business. Among those working with them was former Riverdale Park mayor Michael Herman who had known the family for more than 20 years, both from his positions in city government and as a patron of the restaurant.

“I’ve enjoyed their food for two decades,” he said.

Herman, an attorney, worked with the family in negotiating, facilitating and structuring a deal with potential purchasers of the business that was scheduled to close on December 9. Unfortunately, the purchasers suffered a personal crisis that prevented them from closing the deal as scheduled.

Herman did the work pro bono because he knew the loss would be “to the detriment of our community. This restaurant that has been around for 50 years and has served governors, county executives. Thousands of people have enjoyed fabulous food.”

Until the final days Fereydoun remained hopeful that it would come through, and in late January sent emails to the property owners asking for more time to attempt to complete the scheduled sale.

“We were hoping  . . ,” he says, and begins his sentence again, “If we had know this was going to end up this way . . .  . “  But speaking of these difficulties he stops himself and concludes, “‘If this’ and ‘if that’ isn’t going to get us anywhere.”

He shrugs. “At the end of the day this is their property and their decision.”

Amann agrees that the situation is unfortunate, “He’s a good and honorable man and did everything he could possibly do. But sometimes the fates are against you.”

The fates in this case included the economic times (including the recent government shutdown which caused a marked reduction in business),  increased competition and changing tastes.

“You don’t find a lot of white tablecloth restaurants [today],” noted College Park attorney Richard Daniels, who represented the Salemis and dined weekly at the Calvert House Inn with his family. “The market for that just isn’t supported anymore.”

A glowing review of the restaurant in the Washington Post magazine in July 2013 was headlined, “Simplicity never goes out of style,” yet tastes in restaurants evolved from an appreciation of the classic, upscale to a more casual environment.

Hyattsville resident Dr. Elizabeth Pfaffenroth, who first went to the restaurant with women from her church, notes that,  “It was more a crowd of the old Hyattsville, it was never the new Hyattsville crowd.”

Yet when Pfaffenroth was thinking about place to have a first date with a man she’d met on eHarmony, that was the location that came to mind.

“Where’s a place that I could go to talk? [Calvert House Inn] was quiet and intimate. We met there and talked for so long that they were closing for the evening.”

The couple ate there again the night they became engaged, had part of their wedding reception there, and in January dined there with their baby daughter.

While there had been some changes in decor over the years, the atmosphere may have not been what some diners were looking for.  Yet for some customers that was part of the charm. Capitol Hill resident Rosemary Lally, whose son attends DeMatha, dined at the Calvert House Inn in December with Hyattsville friends.

“I loved that place,” she said. “It was like stepping back in time.” Lally praised the food and also enjoyed the live piano playing.

On his final day as chef, Fereydoun’s eyes shine as he recalls the good times and satisfied customers. His enthusiasm is obvious as he describes his joy when empty plates are returned to the kitchen with compliments to the chef. “Some people almost lick their plates,” he notes, “And they thank us and thank us. It is such a good feeling.”

The thank yous turned to tears for some of the customers who visited the Calvert House Inn on February 1.

Audrey Bragg, who has lived in Riverdale Park since 1970 describes the restaurant as the best in “this whole county” and the owners as “exceptional people.”  She adds, “I could never figure out why the people in town don’t come often enough.”

She recalls the time she brought her brother-in-law, who she describes as a world-travelling food snob, to the restaurant, and he found the food to be fabulous. “People who know restaurants appreciate [this place].”

The Salemis are moving on, heading to California, where their daughter recently graduated from the University of California, San Diego and are looking forward to a fresh start.

However, the neighbors he leaves behind will continue to mourn the loss of what Herman notes, represents  “the closing of an institution,” and consider the lessons it can teach.

“As we start developing,  the reality is that if new businesses come in, and are not supported by the local community they could go the same way as the Calvert House did except that they won’t have a fifty year run.”

Herman concludes,  “That’s a very important part of the message.  You wax nostalgic about stuff when it’s gone and then wonder why did it happen. We are all sort of partly responsible for that coming to pass.”