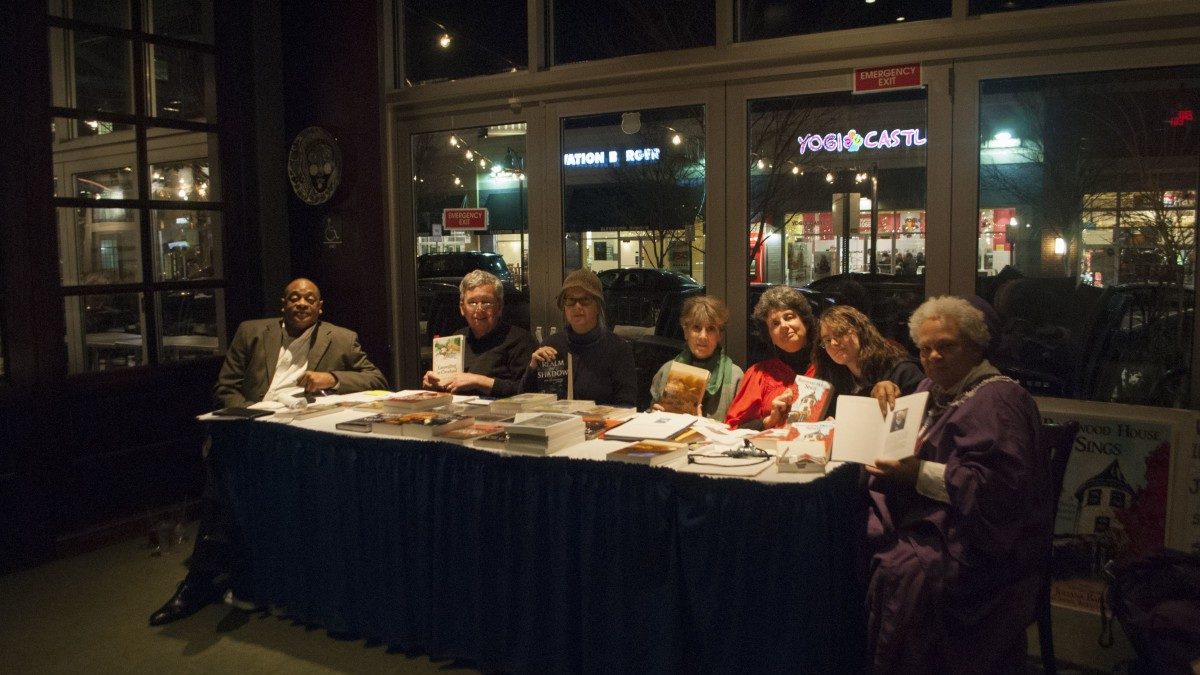 BY RYAN CARBO — The crowd at Hyattsville’s Busboys and Poets was quietly enthralled on Feb. 24 as members of the Gateway Arts District Authors, an informal coalition of local writers, made their way onto the stage to read passages from their latest works and share insights into the creative writing process.

Among the novels highlighted that evening were Richard Morris’ Canoedling in Cleveland, Patricia Weil’s Circle Earth, and Eve Ottenberg Stone’s Sojourn at Dusk, and Realm of Shadow, Dr. Carolivia Herron’s Asenath and the Origin of Nappy Hair, and Samuel Williams Jr.’s Anomalous, the first novel to introduce the iconic Sherlock Holmes to an African-American protagonist. The recently deceased David L. Levy’s Viktor IV, was also featured in the event. Morris, Weil, Stone, and Levy all are or were from Hyattsville, while Williams Jr. and Dr. Herron are from Riverdale and Washington, D.C. respectively.

The artists kicked off the night with a selection of readings from various emerging local authors, introduced and presented by the Mount Rainer-based author of Rainwood House Sings, Juliana Barnet. Her self-described “social justice mystery” novel was co-authored and illustrated by her daughter, Sophie Barnet-Higgins.

“There’s a lot of fascinating history [in the Washington, D.C. area], especially history of struggle for justice and to lift up the community, and especially people who are seeking justice,” said Barnet. “So that’s what I would like to encourage these students to think about.”

Barnet was not the only speaker to comment  on the impact literature can have on youth. With Anomalous, Williams said he wanted to teach young people about black history. African-American writers, he said, have not previously been represented well in the Sherlock Holmes and mystery novel subculture.

Williams said he hopes black youth will be inspired by his precedent to explore writing “not just in the genre of writing romance and the typical things, but to go out and venture into the things like Sherlockian lore or Sci-Fi, just going into areas that blacks ordinarily don’t go into.”

“David would take the two people that are least likely ever to speak to each other and bring them together at the same table, without even knowing it,” Dr. Herron said. “Pretty soon people would be talking to each other who would have never talked to each other before… even his son, at his funeral, mentioned how [David] always went a little bit over the edge in friendliness and exuberance and all that, but that over-the-edge-ness brought people together.”

The Feb. 24 event was not the first time that Gateway Arts District Authors held an event at the Hyattsville Busboys and Poets..

“We have had an ongoing relationship with Busboys and Poets. In 2011 when the Hyattsville [location] opened, a week [later] they invited local authors from Hyattsville to share their readings,” said Gateway Arts District Authors spokesperson Barbara Morris. “At that time, there was Richard [Morris] and I believe four other authors who read at [Busboys] … It’s been a while, but we have maintained a relationship with them and they are very encouraging of local authors.”

Hyattsville Life and Times, 5 years ago 4 min read
From the Editor

From the Editor: What I found when I moved away