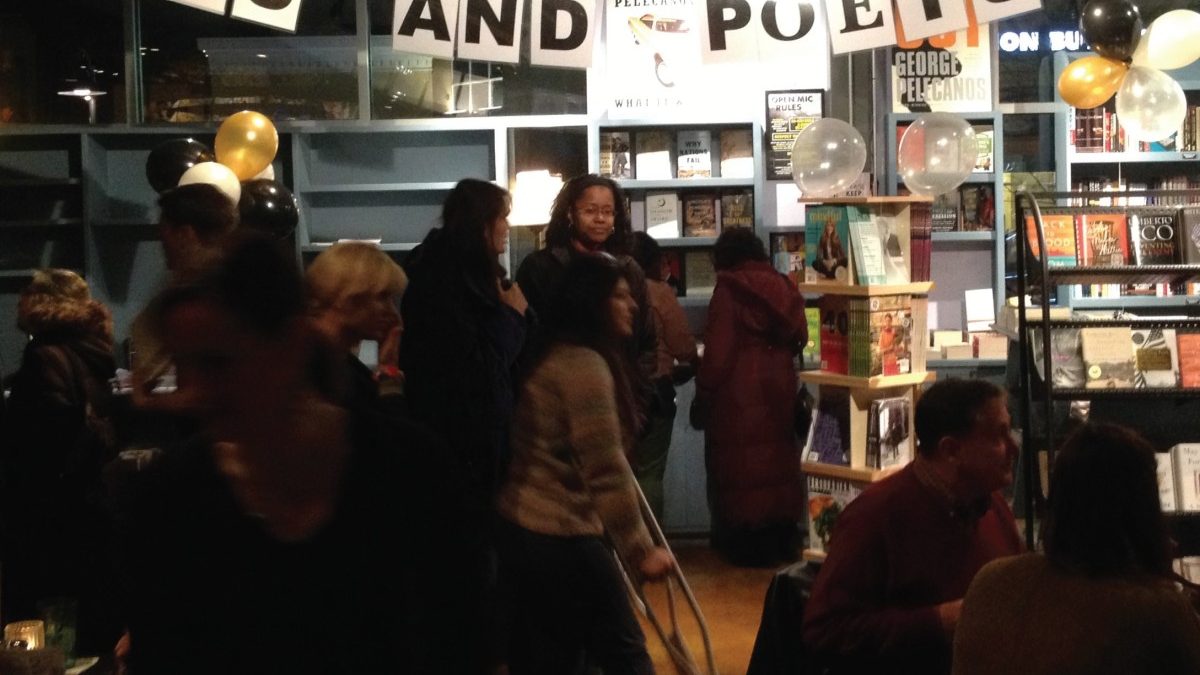 Though there have books available for sale for some weeks, February 1 marked the official opening of Busboys and Poets bookstore. Photo courtesy Josh Logue.
Business

BY JOSH LOGUE — Many Busboys and Poets patrons know that its name comes from events in the life of Langston Hughes. Hughes was working as a busboy in Washington, D.C.’s Wardman Park Hotel when he met Vachel Lindsay, who happened to be dining there. He slipped one of his own poems, “The Weary Blues,” next to Lindsay’s plate. And the rest, as they say, is history.

So it seems fitting that the Hyattsville branch chose Hughes’ birthday, February 1, for the grand opening of its in-house independent bookstore, the second in the Busboys chain.

The branch, at 5331 Baltimore Avenue, became the fourth and most recent Busboys location in July 2011. It’s the second with an on-site bookstore. Customers have been able to purchase and order books since the store’s “soft launch” in November.

A significant chunk of shelf space is devoted to nonfiction, and many of the authors featured there – Ralph Nader, Howard Zinn, Michelle Alexander – have visited at least one Busboys for readings, book signings or talks. Those events, as well as an open mic night every Thursday, have long been part of the Hyattsville spot’s regular calendar.

“It’s a big part of our brand,” Pinnock said.

The store has 3,250 books in stock, with an emphasis on local authors, children’s literature and subjects that Pinnock describes as “casualties of losing independent bookstores,” primarily global, political and social activism.

Two local authors, both of whose books were prominently displayed in the bookstore, stopped by at lunch for a bite to eat on the day of the grand opening. Richard Morris, who lives in Ward 4 and has two novels to his credit, said he is happy to have a community bookstore. This kind of browsing, he says, is “an experience you just don’t get on the Internet.”

“I’m really pleased my books are in the store,” said 30-year Hyattsville resident David L. Levy, whose novel Revolt of the Animals was published in 2010. He added that he appreciates the friendliness of the staff and all the other bounties of an independent bookstore. “You get to see people, and you get to mingle with authors,” said Levy.

Kathryn Robinson, who lives in the area and stopped in to browse the books, said she’s really happy to have a bookstore in the community. If she wants a book, she said, “I’ll definitely come here first to see if they have it.”