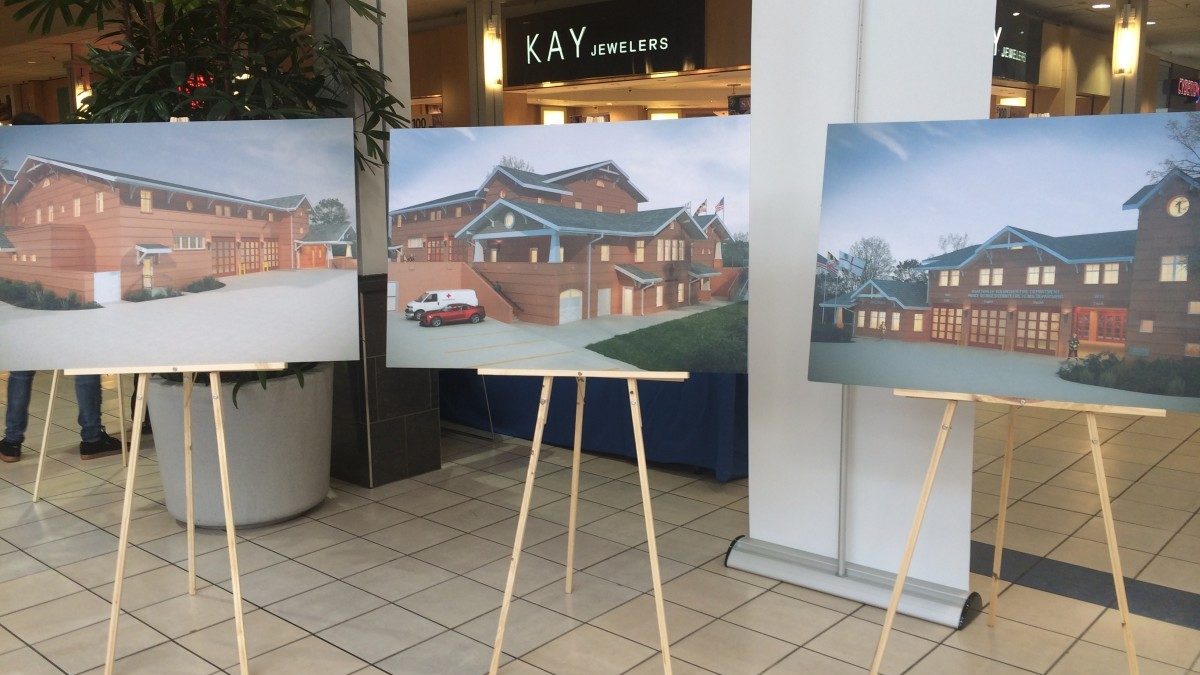 photo by Jenna Milliner-Waddell. Images displayed at the Mall at Prince George's show plans for the future HVFD building.
Hyattsville

BY JENNA MILLINER-WADDELL – Every October, the Hyattsville Volunteer Fire Department (HVFD) holds a fire safety day with interactive opportunities for children and adults.

In past year , the event has been held at the fire station, but this year the event was held at The Mall at Prince Georges. Fire safety day is typically paired with an open house, but HVFD says due to the construction of the new fire station and public safety facility that will combine the HVFD with the American Red Cross of the National Capital region and Prince George’s County, the event had to take place at an off site location.

The department reached out to the Mall and they gladly accepted, Victoria Clark, the Mall’s marketing director, said. Clark emphasized that the Mall is a community center and could not pass up the opportunity to educate.

Although the event could not be held at the fire station, the department displayed photos of what the new building will look like.

“It looks incredible,” Beth Vogel said, who was attending the event with her son. “It is well overdue and well deserved.”

The steady flow of shoppers seemed to enjoy the event, but Ann-Marie Chappell said she was sad that Fire Safety Day was not at the fire station. Chappell says her family returned for the third year in a row because it is a wonderful event that reinforces safety skills for kids like her son, 4-year-old Sam, whose favorite part was getting a fire hat.

Inside the Mall, kids went through the adventure safety course, where they learned about smoke detectors, how to “stop, drop and roll,” and what to say when calling 911. Parents took pictures of their kids after face painting or as their children put on a friendly firefighter’s full uniform.

Adults had the opportunity to get their blood pressure checked, and at the “selfie station,” the whole family could take photos in front of HVFD backdrop.

“I joined eight months ago and have already completed EMT and Fire 1,” Bauer said. The fire station is open all time, staffed fully by volunteers every weekday after 5 p.m. and on the weekends.

Although not everyone was thrilled, having the event at the Mall allowed the fire department to reach more people than they normally would, HVFD treasurer Patricia Thomas said.

Keah Pettigrew was spending her day shopping when the event caught her son’s attention when they decided to stay and participate.

“It is nice that they are doing something for the kids and the community,” Pettigrew said.

Outside in the mall parking lot, the festivities continued as people toured three different fire trucks. HVFD’s Engine 1 is equipped with hoses to put out fires, Truck 1 has stacks of ladders and tools to force entry into locked doors, and Rescue Squad 1 mainly serves in car accidents and high-angle rescue, live-in fire department member Nathan Zecksaid.

Four engines, two ladder trucks, and a special, which is either another truck or Rescue Squad 1, go to every house fire. Zeck said that the recent cases of Ebola have forced them to bring a HAZMAT kit to every call.

The Hyattsville Police Department also had a table at the event, which they used to educate the community on their blue emergency call boxes and the 11 surveillance cameras set up all over the city, one located on the Prince George’s Plaza Metro pedestrian bridge, that link to the police dispatch center. The cameras give police officers more information about the situation they are going into and help to catch suspects, Sgt. Richard T. Hartnett said.

The police department also displayed their laser and radar guns used to catch speeders, a breathalyzer, and the tool they use to see if the tint on your car window is too dark.

Since the new fire and safety facility will not be ready for next year’s event, the HVFD Vice President David Iannone said that they hope to return to the Mall next year.