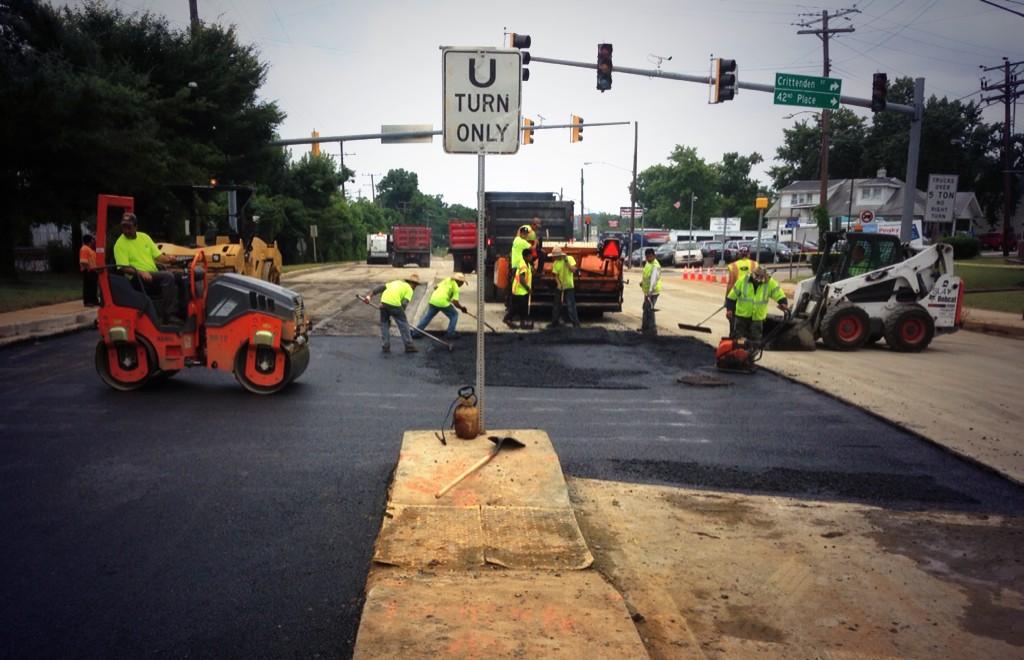 According to the City of Hyattsville, all lanes on Rhode Island Ave are open in both directions.  This after WSSC and Verizon needed to repair water and fiber lines following a massive water main break.

The break at 4806 Rhode Island Avenue has closed the major thoroughfare from Charles Armentrout Drive to Gallatin Street, with northbound traffic being diverted to Alternate Route 1.  Crews are working to repair the 73-year-old pipe.

An approximately 18 foot section of the pipe was removed Friday morning. ABC7 reports a WSSC spokesperson said the repairs may not even be finished Saturday, because crews believe there may be more cracks in the 12 inch pipe.

About 16 customers were without water until Friday evening, said WSSC spokesperson Lyn Riggins, most of them businesses along Rhode Island Avenue (also known as Route 1), but residents in the area are reporting dirty tap water.  ABC7 reports the District Courthouse was without water for a period.

It’s the same block where a pedestrian died in January when an SUV spun out of control in an accident that was initially blamed on black ice from a water main break.

Hyattsville City Police received a call about the flooding roadway at 3:45 p.m. Thursday. By 4:30, muddy water a few inches deep had spread over three blocks of Route 1, and was starting to seep up Crittenden Street and 42nd Place. When WSSC workers arrived, they had trouble finding the submerged valves, but were able to shut off the Rhode Island Avenue water main around 7 p.m. By then, an estimated 6 million gallons of water had escaped, causing a section of the road near 42nd Place to buckle.

In addition to the Route 1 closure, Crittenden is closed at 42nd Avenue, and 42nd Place is closed at Decatur. Drivers are urged to find alternate routes.

ABC7 has been on the scene and has more:

After loss to St. John’s, No. 2 DeMatha looks forward to playoffs

Hyattsville Life and Times, 4 years ago 7 min read
Beyond Hyattsville

Update: Seven Hyattsville residents on the ballot this June