BY CAROLINE SELLE AND REBECCA BENNETT — On Friday, July 10, former Hyattsville resident Lloyd Lee Welch Jr. was indicted on two counts of first degree felony murder in the kidnapping and killing of 10-year-old Katherine and 12-year-old Sheila Lyon in 1975.

On March 25, 1975, the Lyon sisters walked from their home to eat lunch and look at Easter decorations at Wheaton Mall, State’s Attorney for Montgomery County, Md. John McCarthy said. They never returned home.

“I was teaching high school two blocks from here on the day those girls were abducted,” said McCarthy. “It has remained with us forever.”

The latest development in the case of the missing Lyon sisters was announced at a press conference in Montgomery County, Md. on July 15. Three generations of the Lyons family were present at the press conference, though authorities said the contents of the previously-sealed indictment were already known to them. 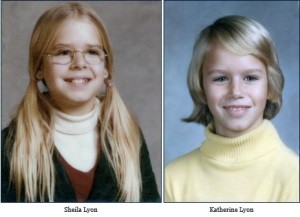 “First degree felony murder is the allegation that … during that abduction and as a consequence of that abduction Lloyd Lee Welch committed the murder of those girls,” said Randy Krantz, commonwealth’s attorney for Bedford County, Va.  The location of the indictment means that officials likely believe the murder of the girls took place in Virginia.

After the girls disappeared, a sketch of a suspect was released and a massive manhunt took place, but the case eventually went cold. Still, police never stopped looking.

Though Welch was interviewed by investigators around the time of the girls’ disappearance, detectives did not consider him as a suspect until two years ago. Detectives named him a person of interest in the case in early 2014. His uncle, current Hyattsville resident Richard Allen Welch Sr., was named a person of interest later that same year.

According to police, Welch allegedly told investigators he left the mall with the Lyon sisters and later saw his uncle, Hyattsville resident Richard Welch, sexually assaulting one of them. In a letter to the Washington Post, Welch later accused police of twisting his words.

However, the Washington Post reports that around the time the girls disappeared, police say Lloyd Lee Welch approached a cousin in rural Virginia and asked if he could wash a duffel bag full of bloody clothes.

After Welch and Welch Sr. were named as persons of interest, a multi-jurisdictional grand jury convened in Bedford County, Va. to examine the evidence. It has been meeting in secret proceedings ever since and officials say it will continue to do so as new evidence is unearthed.

In January 2015, Montgomery County and Bedford County police and the FBI’s evidence recovery team searched for evidence of the girls’ remains on Taylor Mountain, a remote piece of property once owned by Welch relatives and still home to many of their relatives today.

In May 2015, detectives executed a second search warrant on the Hyattsville home of Richard and Patricia Welch. It remains unclear what evidence, if any, was obtained. Patricia Welch was indicted in early July, accused of felony perjury. Her trial is scheduled to begin in Oct. 2015.

“We will work to hold every individual accountable,” said Manger, not only for the girls’ abduction and murder but for “…the concealment of these crimes.”

“We believe that there are people who have information, who knew about what was happening,” he said. Authorities said non-cooperation prolonged the investigation.

The trial will take place in Bedford County, Va., where officials have been searching for evidence in the Lyon sisters’ disappearance since Sept. 2014. Officials said the decision to indict Welch Jr. and try the case in Bedford County was carefully considered.

“[We] made a decision about what was best for this case,” said McCarthy.

“…it may be the end of the beginning,” said Krantz, in bringing those involved Lyon sisters’ kidnapping and killing to justice.

But the case would not be without hurdles, officials said. The girls’ bodies have not been recovered, and proving a no-body case is extremely difficult.

Officials say they are prepared. “If there is a method or a manner by which anyone has proved a no-body case …. we have reviewed that material,” said McCarthy.

If convicted, Krantz said 1975 standards would apply, which means Welch could face 20 years to life in prison — or death.

“The reason [the girls] did not return home that day was because they were prevented from returning home,” said McCarthy.

Officials said the indictment does not mean the investigation is over. “Searches for physical evidence will continue,” said Manger. “We have served warrants and plan … more warrants in the future.” He said over 50 search warrants have been served so far in the investigation.

“This investigation continues today and it will go beyond the events we are about to outline,” McCarthy said at the beginning of the press conference. He said the case was not confined to a single jurisdiction.

A second press conference is scheduled at noon on Thursday, July 16 in Bedford County. Authorities said while the same officials would be speaking, additional details would be revealed.

Shakespeare's "Romeo and Juliet" coming soon to a park near you