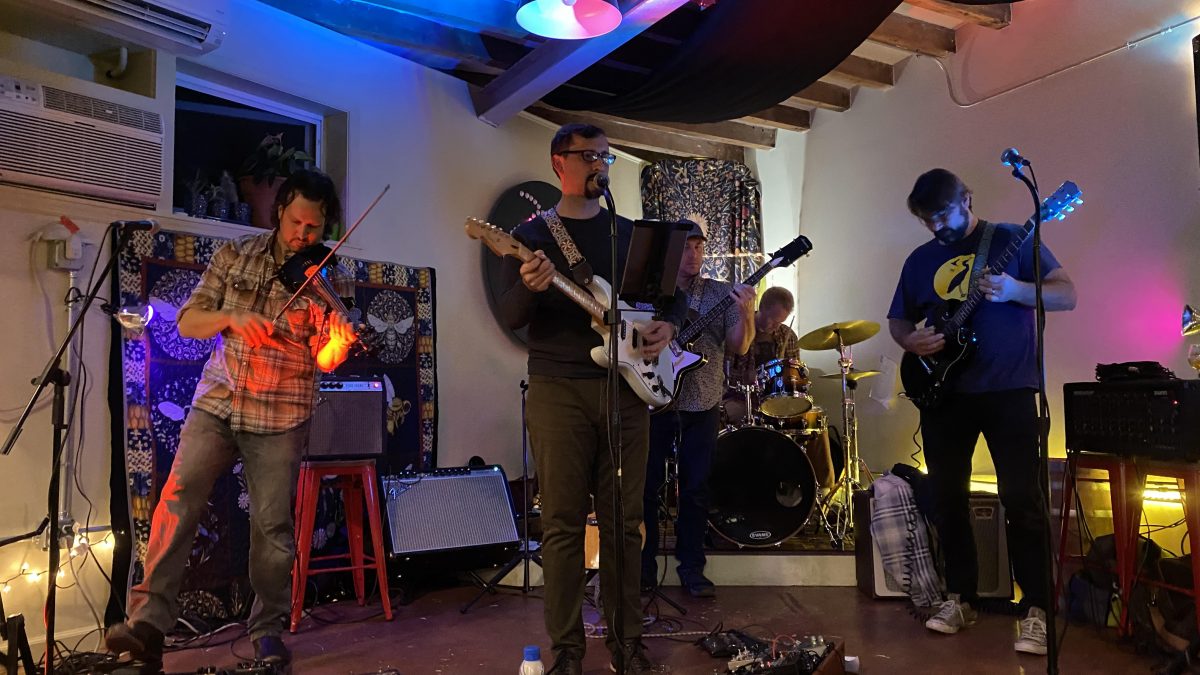 On Saturday night, Nov. 6, Blue Plains – an indie-rock band from Hyattsville, Md. – squeezed into the corner stage at Maryland Meadworks – a local brewery and restaurant – to play its signature indie-rock music.

“We may not be rich, we may not be king, we will not be served by the pyramid scheme,” sang Lee Cain. “We are the meek and the world is ours.”

A color-changing spotlight was fixed on Cain, and a neon sign shined in the background, as the group infused blues and grunge into their folk-influenced songs.

The five-member band had set up its equipment for the first time at Maryland Meadworks. The brewery has live performances some weekends, often pairing musical artists with brunch events.

Fans, family and friends filled the seats by the band’s third song of the night, leaving a handful of people to stand by the propped open front door. Solemn vocals and notes from controlled violin strings filled the room and flowed out onto Rhode Island Avenue.

Thrashing hard enough to break his E string, Pete Daniels –the band’s violinist – continued to play without fixing it.

Afterwards, he said he had recently seen an idol of his, blues guitar player Chris Cain, keep playing after breaking a string at the Lancaster Blues and Roots Festival (October 16). “It was the first thing I thought of when it happened to me.”

Blue Plains came together in 2015 after Adam Ortiz (incidentally, the new top EPA official for the mid-Atlantic region) and  Cain, a vocalist and guitar player, met at a board meeting for the Anacostia Watershed Society, a non-profit organization working to protect and restore the Anacostia River and its watershed communities.

The band takes its name from the Blue Plains Advanced Wastewater Treatment Plant, which cleans the Anacostia River.

Ortiz and Cain started writing music together late at night after putting Cain’s kids to sleep, according to Ortiz. The two songwriters then recruited Daniels, the violinist, before reaching out to friends to find the band’s drummer, Joe Hodgson, and bass player, Brandon Miller.

Although some band members play in other, smaller neighborhood bands, Blue Plains comes together regularly to prepare for its live performances, according to Daniels.

“[The songs] aren’t standard… They’re based on blues and jazz,” Daniels said. “So, [we] really have to know how the song is laid out. [We] have to practice a lot to have a good show.”

Although finding time to practice can be difficult with full-time jobs and families, the biggest challenge the band faced was Covid-19.

Prior to the pandemic, according to Ortiz, Blue Plains played at festivals and small venues, and, in 2018, had a record release for their album “Falling Sky” at the Black Cat.

Early on during the pandemic, Daniels, Ortiz and Cain would practice outside. But a full year passed before the whole band was vaccinated and could come back together to rehearse, according to Daniels.

After playing at the Hyattsville Porchfest earlier this year, Ortiz asked Ken Carter, the founder and owner of Maryland Meadworks, if Blue Plains could play at the brewery.

Ortiz and Miller already played the venue as a duo, and Daniels previously played there with another band, so Carter was more than willing to host the indie-rock group, according to Daniels.

The group tested out some of its newer music to decide what to include in their next album. Before the show began, Ortiz asked the audience to applaud when they liked a song – he quickly added, “and if you don’t like it, still applaud.”

Audience members bounced their heads and clapped to the rhythm of the band’s closing songs.

Christine Blackerby, a Hyattsville resident, said “It’s definitely the type of music that I like” adding that she often has to go further to find it.

“I try so hard to make the good times last,” Cain sang.

The night ended with toe-tapping songs that introduced fans to the group’s newer upbeat sounds, and possibly the band’s next album tracklist.

Winter Hawk is a fall 2021 intern with the Hyattsville Life & Times.