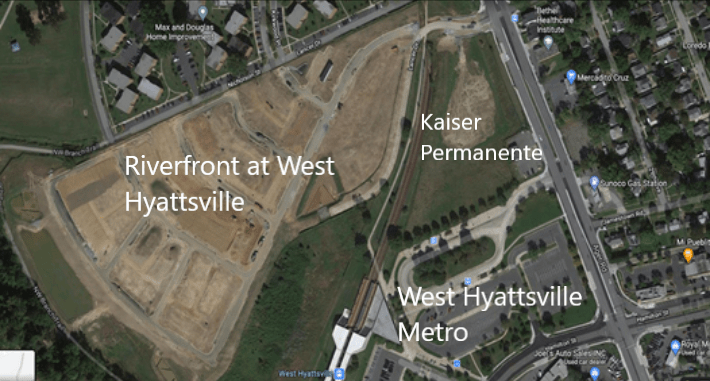 The Riverfront at West Hyattsville Metro development will be starting construction in the pie-shaped area on the left. A new Kaiser Permanente building and parking garage is going in the triangle-shaped parcel to the right of it. Courtesy of Google Maps
Hyattsville

Those who frequent Hamilton Street and Ager and Queens Chapel roads have likely gotten used to the constant construction but may be unaware of some of the changes coming to the area.

Construction on Queens Chapel and Ager roads, ongoing since 2019, closed Ager Road for much of the last year to allow for infrastructure improvement and sidewalk installation. The construction is slated to last until 2022, so those orange cones are not going anywhere anytime soon.

Gilbane Development agreed to make those improvements as part of the Riverfront at West Hyattsville Metro project. Gilbane Development has been working since 2017 on the project, cutting down trees and rebuilding trails along the Northwest Branch River, creating a 4-acre park that incorporates compensatory flood water storage and grading the 25-acre parcel next to the Metro station to raise the future construction out of the 100-year flood plain.

Stanley Martin Home Builders began work this year in constructing the first 54 town houses on the site, which will be closest to Ager Road. It will take several years to complete the build-out with multifamily housing and ground floor retail.

Kaiser Permanente on its way

Adjacent to the Riverfront at West Hyattsville Metro project, Kaiser Permanente Medical has purchased land between Lancer Drive and the Metro bus entrance. Kaiser Permanente will be constructing a 44,362-square-foot office building, with an attached three-story garage, that will include offices, a laboratory, a pharmacy and a public coffee shop. Construction is slated to start early this year. Kaiser plans to move from their current location at University Town Center to the office building when it opens, which is slated for August 2023. In an October 2020 interview, Gilbane Development’s Vice President Robert Gilbane Jr. said that Kaiser Permanente was committing to become an “outward facing” part of the community, with plans to enrich the neighborhood by hosting opportunities like a regular farmers market.

Those who frequent the Queens Chapel Town Center have probably noticed the slowly changing landscape. The Hamilton Street Aldi’s facelift is finished, and, next door, the renovation of the former Pizza Hut, which will become a liquor store, has begun. Last year, the city council approved Lee’s Liquors’ license to move into the building, with several caveats, the first of which is that it be renamed to Hyattsville Fine Wine and Spirits. Currently, however, the work permits still reflect the name from the original proposal, Liquor Hut.

The KFC at the corner of Hamilton and Ager roads has closed. There are currently no definitive plans for its future use. On the HOPE (Hyattsville Organization for a Positive Environment) email group, there were discussions of what residents wanted to see there; suggestions ran the gamut from local eateries, like a Greek diner, to a chain restaurant like Panera Bread, but as Councilmember Edouard Haba (Ward 4) noted, whatever replaces the KFC will have to conform to the West Hyattsville Transit District Development Plan in place for the area. In short, many prospective businesses that have looked into the property have been dissuaded or slowed down because the existing drive thru is not permissible or able to be grandfathered in, because of the current plan.

The West Hyattsville-Queens Chapel Sector Plan is a new transit district development plan initiated by the county planning board on Sept. 17, 2020. The plan, which will replace an equivalent 2006 one, covers West Hyattsville and the Queens Chapel corridor from Queens Chapel Town Center to Queens Chillum Shopping Center. The county planning department is gathering community input to form a plan that would guide development along Queen’s Chapel for the next 15 to 20 years, in keeping with the county’s new zoning ordinance and 2014 countywide general plan. The department will consider input about the kinds of development, such as affordable housing, land use ideas (within current zoning) and the types (but not specific) of businesses citizens would like to see.

The planning department held a virtual open house on Jan. 13 and a virtual visioning workshop on March 13. In general, people wanted development that was walkable and bikeable, diverse businesses that did not promote loitering or disorderly behavior, greater beautification of and access to public space, and the creation of a pedestrian-only, Main Street-like space along Hamilton Street.

Although the online survey ended early this month, there is still time for input through 2021, using the twice-monthly office hours offered through the planning department’s website.

With a new development plan in place by 2023, and with the current construction progress underway, it is likely that the West Hyattsville landscape will look vastly different in five to 15 year than it does now. The vision of the future includes a diverse, vibrant area bustling with pedestrians — and, hopefully, fewer orange cones.

Stories of the enslaved echo at Riversdale

HPD rallies to help one of their own fighting cancer