Beryl starts with a BANG

BY CAROLINE SELLE — As the new Senior and Disability Services Coordinator for the City of Hyattsville, Beryl Johnson hit the ground running. In the months since her introduction to residents during Hyattsville’s August City Council meeting, Johnson has organized several outings for seniors and presented to area seniors on topics ranging from diabetes to Alzheimer’s. 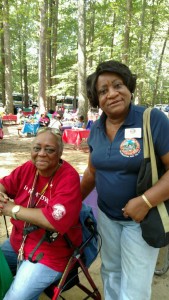 “I started with a bang,” she said.

She’s been particularly focused on increasing opportunities for the residents of Friendship Arms, the senior independent living community located on 42nd Ave. Over 45 of the building’s residents attended her “Brunch with Beryl,” Johnson said — an unexpectedly large turnout.

“I met with them and I asked all of them, ‘What [is] it that you would like to see happen?’” Her programming initiatives reflect their feedback: In October, she plans to take residents to Toby’s Dinner Theater to see Ragtime. Previously, Johnson organized a trip to Bladensburg Waterfront Park, where attendees toured the Anacostia with a guide.

Johnson is originally from Washington, D.C. and was born and raised in Northeast. She received undergraduate and graduate degrees from Michigan State University.

“After I came back to this area, I worked in community services for many years,” she said.

Her jobs included positions at United Communities Against Poverty and the Prince George’s County Department of Family Services. She served as the CEO of Friendship House, running a psycho-social rehabilitation program that helped previously institutionalized individuals reintegrate into society after long-term mental institutions shut their doors. She also worked in employment services with the D.C. government.

When Johnson retired from a position with Prince George’s County where she worked closely with seniors and their caregivers, she soon found herself looking for work.

“I needed to come out of retirement,” she said. When she read the posting for the Hyattsville position, she said she thought, ““That looks like I wrote it for myself.”

As the Senior and Disability Services Coordinator, Johnson said she hopes to work closely with Hyattsville Aging in Place. She’s attended Ageless Grace, a program she’d like to see more people join. And, Johnson is working on a community survey so the city council will have a clear picture of what Hyattsville’s senior residents want and need.

She would also like to see Hyattsville residents engage with the Retired and Seniors Volunteer Service (RSVP), a program that connects skilled individuals with volunteer projects.

“A lot of the seniors have experience,” she said. “… If they want to give back, this is an opportunity for them to give back.”

When she’s not at work, Johnson is active in her church as a trustee. “I’ve been a member for over fifty years,” she said. She works with a STEM group; sheis very involved in a school supply drive called “Tools for School”; and she is a longtime member of the Kiwanis Club.