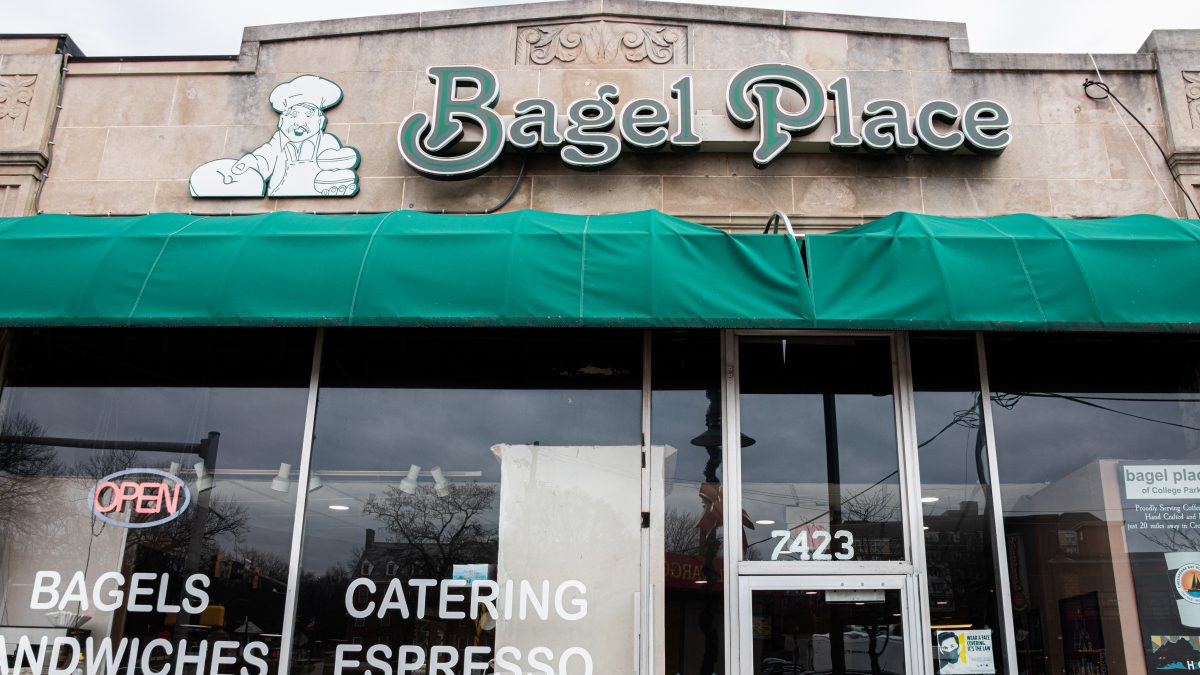 Bagel Place of College Park has been a mainstay of the community for over 30 years, serving our community bagels, coffee and deli sandwiches. And now, like many other small businesses across the country, the shop is struggling to keep its doors open, as financial pressures resulting from the COVID-19 pandemic threaten the business.

The owners started a GoFundMe page Dec. 12, and, as of press time, the campaign is almost halfway toward reaching its $85,000 goal. The community’s support is apparent, as donors share their memories of eating at Bagel Place on the page, along with their donations from $5 to $2,000.

The shop, which is located at 7423 Baltimore Avenue, has done everything it can to survive. According to their GoFundMe page, the owners have even emptied their personal savings to keep the place running and pay their employees.

But their goal might not carry them completely through, and the business is trying to hang on for another nine months, said owner Bobby Karanovich. Sales have been down 50%, and Karanovich said that the fact that the University of Maryland is not fully open has really hurt their sales; students and staff are a substantial part of the shop’s customer base.

Karanovich is looking to August, when students may return to campus. He hopes that the GoFundMe campaign will keep Bagel Place open until then.

Andrea Shirdon, a junior at the university, grew up in Hyattsville and has been going to Bagel Place with her family almost every Sunday since she was young. After watching another College Park eatery, Plato’s Diner, close a few years ago, Shirdon said that Bagel Place is one of the only places left in the city that embodies the essence of College Park to her. She and her family now support the shop by getting takeout every week.

“I hope the GoFundMe gets them through a little bit,” she said. “I feel like once the vaccine happens, then I think they could start to recover again.”

Another student at the university, Jackson Rivenburgh, loved to go to Bagel Place on the weekends for breakfast when he lived on south campus. The cafe has sentimental value, he said, mentioning that he and his girlfriend had one of their first dates there. He said he was upset that the shop might close.

“I really hope they hang on; as long as they’re still open, it’ll be my first stop once I’m back on campus,” Rivenburgh said.

Community Forklift, a nonprofit reuse center in Hyattsville, donated $200 to the GoFundMe campaign. Operations Coordinator Sue Wagner said that before the pandemic, they’d have food from Bagel Place at their monthly staff meetings. Since the March shutdown, they haven’t been able to do that, so they decided to support the business with a donation.

“We can also relate, as a small business during this time, and know how tough it is to try and keep everything going and keep your employees paid with reduced business,” Wagner said.

Karanovich thanked the community for the support and said he hopes that Bagel Place can continue to serve College Park.

From The Editor: Hyattsville: a year in review, a year anew

Guilford Woods Gets a Temporary Reprieve